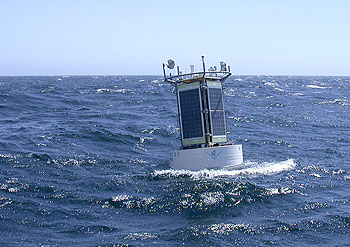 First deployed on December 3, 2002, this cutting-edge oceanographic platform came loose eleven days later, when raging storm waves broke the anchor cable holding it to the seafloor. Replacing an anchor cable might not seem very difficult, but in this case, the cable was arguably the most important and revolutionary part of the entire mooring system. In fact, MBARI engineers spent over a year doing failure analysis, computer modeling, and painstaking redesign before they felt comfortable redeploying the MOOS test mooring on April 23, 2004.

The MOOS test mooring is designed to address two of the biggest challenges in deep ocean research: 1) how to provide long-term power to instruments on the deep seafloor, and 2) how to get data from these instruments back to the surface. Most deep-sea instruments run on batteries that must be replaced every few months, requiring a time-consuming and costly visit by a human-occupied or robot submarine. Furthermore, the data from these instruments must be stored on internal memory chips or hard drives. Many an oceanographer has known the despair of recovering an instrument that sat on the sea bottom for three months but only collected three minutes of data because of some minor hardware failure.

The MOOS test mooring represents an entirely new approach to these problems. Solar and wind energy are collected at the surface and then transmitted 1,500 meters down to sea-bottom instruments using copper wires embedded within the mooring cable. Data are transmitted through fiber-optic “wires” that are also embedded in the cable. After the data reach the surface, they are relayed by satellite back to shore, allowing scientists to know within minutes when an instrument has failed or when something interesting is happening. But sending data thousands of kilometers by satellite link is somewhat routine (for MBARI engineers) compared with getting data a few thousand meters up from the sea bottom to the surface. That’s why the MOOS mooring cable is so important. 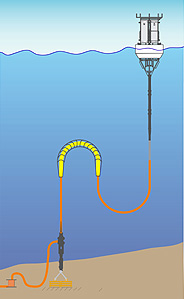 Simplified drawing of the final design for the MOOS test mooring cable (not to scale).

Most anchor cables for open-ocean moorings are designed to survive storms not by brute strength, but by stretching under load. Thus, they usually incorporate long lengths of nylon line, which can readily stretch up to 20 percent of its initial length without damage. However, fiber optic strands are almost as thin and fragile as a human hair, and can’t survive being stretched or kinked at all. So the MOOS mooring engineers had to design a cable that could survive storm waves without stretching or bending significantly.

They did this by adding a lot of “slack” to the middle of the cable. Under normal conditions, this slack section of cable is held up by floats, forcing the cable into a sideways “S” shape underwater, as shown in the illustration at right. Under storm conditions, this “S” shape repeatedly flattens out then reforms, absorbing the motion of the waves and minimizing tension on the cable. The cable also incorporates a special “snubber” section just below the buoy, which was based on work by Walter Paul at Woods Hole Oceanographic Institution.

According to Mark Chaffey, lead engineer on the mooring project, the first MOOS mooring cable broke not because it was pulled too hard, but because it was flexed over and over again at the point where the cable passed through one of the floats. Under repeated wave motion, the Kevlar strands that provided strength to the cable began to fatigue, like a paper clip bent repeatedly back and forth. To reach this apparently simple conclusion required months of detective work—examining the old cable and testing its response to various stresses—before the engineers could be certain that this was how the failure occurred.

The engineers’ next step was to redesign the cable so it wouldn’t fail again in the same way. This involved additional months of computer modeling and testing of five different cable designs. Much of this work was performed by MBARI engineer Andy Hamilton. Hamilton knew that he couldn’t get rid of the floats entirely. Instead, he used floats of a different design, which interlocked to form a continuous, flexible sheath around the cable, like the vertebrae in a spinal column. Additional flexible, tapered floats were added the ends of this 25-meter-long sheath to keep the bending forces from being focused on these areas. 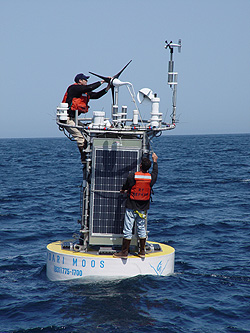 After specifying, ordering, and receiving their custom-designed cable and cable floats, the team headed out to sea again on a beautiful spring day. Even in nearly ideal conditions, the crew had to be extra careful to deploy the 1,400-kilogram buoy and 2,000 meters of cable without bending or kinking the cable. But the mooring was deployed without a hitch, and in a matter of minutes, the shore-side data system was receiving data that indicated the fiber optics and other systems were functioning properly.

Chaffey and his team will be monitoring these systems continuously over the next year to see how they hold up under both summer and winter conditions. During this time, the new mooring will be returning data on wind, wave, and weather conditions, as well as information on the acceleration, stresses, and strains experienced by the cable and mooring system. However, as Chaffey is quick to point out, “We do not guarantee science data.” As its name implies, the primary purpose of the MOOS test mooring is to make sure that all the engineering components work properly, without risk to ongoing scientific studies.

If all goes well, the next phase in developing the MOOS test mooring will come in Fall 2004, when the mooring will be connected with a benthic instrument node on the seafloor. The instrument node will be connected to the mooring by more than a kilometer of fiber-optic cable, which will be laid along the seafloor by MBARI’s ROV Ventana. Monitoring devices inside the benthic instrument node will collect basic oceanographic information such as water temperature, salinity, and currents. These data will be sent up to the surface through the cable, then back to shore by satellite.

Once these instruments are successfully installed and returning data, David Packard’s risk-taking strategies and the perseverance of MBARI’s engineers will have achieved a major milestone—establishing one of the world’s first functioning deep-water oceanographic observatories.

The MOOS project team gratefully acknowledges funding from the David and Lucile Packard Foundation and the National Science Foundation under award OCE-0337888.