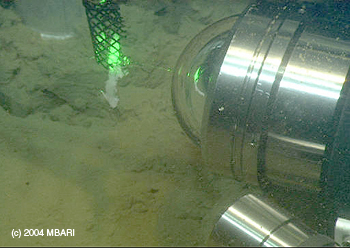 This photograph taken by a camera on board the ROV Ventana shows a thin stream of carbon dioxide hydrate slurry being illuminated by green light from the carefully focused laser (at right). A sensor next to the laser picks up the scattered light, which is analyzed to determine the physical and chemical properties of the hydrate. Image (c) 2004 MBARI

In late March, MBARI engineers and scientists used a specially adapted laser to measure the chemical properties of sediment, rocks, and carbon dioxide in the deep waters of Monterey Bay. During four day-long dives with MBARI’s ROV Ventana, the team tested an amazing analytical device called a laser Raman spectrometer.

By shining a specially tuned laser beam on almost any object or substance–solid, liquid, or gas–a laser Raman spectrometer can determine the object’s chemical composition and molecular structure. For example, by moving the laser beam across a block of granite, the scientists can tell what minerals are present in the rock, as well as the crystalline structure of those minerals. Similarly, by shining the laser into a beaker of seawater and carbon dioxide, the device can tell how much carbon dioxide has dissolved in the water, and how much has combined physically with the water to form a semi-solid mixture called carbon dioxide clathrate hydrate.

Note: This hydrate slurry experiment was a joint effort Dr. Costas Tsouris of Oak Ridge National Laboratory, funded in part by the US Department of Energy. A paper on this work was recently published in Environmental Science and Technology.

During the first of their March dives, the researchers tested the spectrometer on a variety of solid objects, including rock samples, shells, and even bacterial mats. Later dives focused on studies of carbon dioxide clathrate hydrate, studying how the density of this material changed, causing it to float or sink at various depths and pressures. This information is important in light of recent proposals to pump excess atmospheric carbon dioxide into the deep sea (a process referred to as carbon dioxide sequestration) in an effort to counter global warming.

Although laser Raman spectrometers have been used for many years in carefully controlled laboratory settings, this is the first instrument that has been adapted for use in the challenging environment of the deep sea. Led by senior engineer Bill Kirkwood and senior scientist Peter Brewer, MBARI engineers and scientists have spent the last four years working out details of the system.

MBARI engineers started with a commercial spectrometer, then modified it to resist the crushing pressure, near-zero temperatures, constant motion, and vibration inherent in deep sea work with an ROV. They also had to find ways to minimize its weight and power consumption and allow the instrument to be controlled and calibrated through a mile or two of fiber optic cable. In 2002, the researchers tested the system down to depths of 3,600 meters. The instrument not only survived, but brought back unique data showing how carbon dioxide (a major greenhouse gas) behaves in the deep sea. In 2003, the research team measured chemical signatures from gases emerging from deep sea vents in the Gulf of California.

During these earlier field experiments, the researchers found that the spectrometer could only make measurements on a tiny area (much smaller than the head of a pin) where the laser beam was focused. This was not a problem for liquids and gasses that could be held in large glass containers–the beam could easily be focused anywhere inside the container. However, focusing the beam exactly on the surface of a solid object was much more difficult, because the laser had to be positioned to within one tenth of a millimeter and held absolutely still for several minutes. This was not possible in the early systems, because the spectrometer was mounted directly on the ROV, which has the size, weight, and maneuverability of a compact car.

To solve this problem, MBARI postdoctoral fellow Sheri White spent most of 2003 working with a team of engineers and scientists to develop the PUP or “precision underwater positioner.” The PUP is a small, sturdy, three-legged platform that supports the laser and spectrometer. Set on the ocean bottom for stability, this device allow scientists at the surface to remotely control the positions of the laser beam and the detector within a tenth of a millimeter. In December of 2003, White served as chief scientist during a three-day field test of the PUP using ROV Tiburon. The March 2004 dives marked the first complete field test of the PUP on ROV Ventana. In both cases, the PUP performed flawlessly, a testament to the team’s perseverance and dedication to this difficult project.

Laser Raman spectrometers have been used on land for medical diagnosis, environmental monitoring, criminal analysis, and to analyze remnants of bacteria in billion-year-old rocks. They may eventually aid in the search for life on Mars. Oceanographers will no doubt find many more uses for the laser Raman spectrometer as MBARI researchers further improve and refine their amazing new oceanographic tool.

How the laser Raman spectrometer works:

At the most basic level, a laser Raman spectrometer consists of a laser and a detector. The laser is used to focus a very bright beam of known wavelength (color) onto the object or substance to be studied. Most of the beam is scattered in random directions at the same wavelength as the laser itself. However, as the beam interacts with the electromagnetic fields of chemical bonds inside the substance, an extremely small proportion of the light (one out of 100,000,000 photons) is scattered at other wavelengths. (This is called the Raman effect, after the Nobel laureate C.V. Raman.) The wavelengths present in the Raman-scattered light depend on the composition and structure of the scattering object.

The job of the detector is to determine exactly which wavelengths are present in the Raman-scattered light. A filter within the detector cuts out all light having the same color as the laser beam itself, leaving only the Raman-shifted light. This faint light then passes through a refraction grating, which acts like a prism, splitting it into a spectrum. An extremely sensitive camera captures this spectrum. The spectrum is finally scanned to create a graph showing the intensity of the Raman-scattered light at different wavelengths. The peaks and valleys in this graph indicate which compounds and chemical structures are present in the object being studied.

In late March, MBARI engineers and scientists used a specially adapted laser to measure the chemical properties of sediment, rocks, and carbon dioxide in the deep waters of Monterey Bay.