These images show the study area for the March 2013 ECOHAB experiment. The left-hand image shows the tracks of a few ships, AUVs, and underwater gliders that were active during the second day of the experiment. The right-hand image shows this same area overlain by a satellite-derived map of chlorophyll, an indicator of marine algae near the sea surface (dark red areas have the highest amounts of chlorophyll). Real-time tracking of ships, robots, drifters, and ocean-conditions helps ECOHAB researchers monitor and plan their experiments from offices on shore. Base image: Google Maps

Killing wildlife and occasionally sickening people, harmful algal blooms can be more than just a nuisance. But predicting these blooms is difficult—even more difficult than predicting the weather—because blooms result from a dynamic interaction between both physical and biological processes. Human activities, such as agricultural runoff and sewage discharges into the ocean, may also play a role.

The ECOHAB (Ecology and Oceanography of Harmful Algal Blooms) research program, sponsored by the National Oceanic and Atmospheric Administration (NOAA), is providing key information that may one day allow researchers to overcome these challenges and predict when and where blooms are likely to occur.

Since 2010, ECOHAB researchers have been conducting field experiments at two harmful algal bloom “hot spots”—Monterey Bay, in Central California, and San Pedro Bay, in Southern California. During March 2013, researchers will be conducting a month-long study of at the southern site in San Pedro Bay.

The ECOHAB research grant is overseen by Raphael Kudela of the University of California, Santa Cruz, but the field program involves a number of MBARI researchers, as well as MBARI’s autonomous underwater vehicles (AUVs) and robotic DNA labs known as Environmental Sample Processors. Many of the tools and research strategies used in the ECOHAB experiment were developed as part of MBARI’s Controlled, Agile, and Novel Observing Network (CANON) Initiative.

In pursuit of microscopic prey

During the March 2013 experiment, researchers are on the hunt for a microscopic alga (a diatom) called Pseudo-nitzschia australis. Pseudo-nitzschia diatoms sometimes produce a neurotoxin that can become concentrated in the bodies of small fish such as anchovies. When predators such as sea lions, pelicans, or other sea birds eat these fish, they may experience seizures and organ damage. The scientists are also keeping a lookout for a second harmful alga, the “red-tide” dinoflagellate Alexandrium catenella. Toxins from this alga are concentrated by shellfish and can cause paralytic shellfish poisoning.

The researchers are collecting data from two ships, half a dozen underwater robots, moored instruments, and satellites, to figure out what causes algae to bloom in San Pedro Bay, and how such blooms evolve over time. They are also using computer models to see how well they can predict ocean conditions before and during the bloom. Eventually they hope to adapt these models to predict blooms before they occur.

The researchers planned their experiment based on several hypotheses about how harmful algal blooms develop over the San Pedro Shelf (an area of flat, relatively shallow seafloor are just south of San Pedro Bay):

Digging beneath the surface 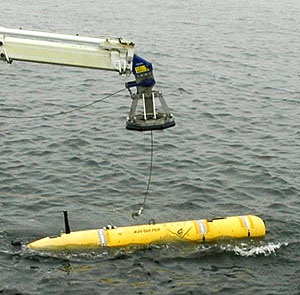 Before the researchers can track an incipient algal bloom, they have to find it. If the bloom is at the surface, and the sky is not cloudy, the bloom can be seen by satellites. But blooms near the San Pedro Shelf may begin in deeper water, far below the depths visible to satellites. To find these “cryptic” blooms, scientists have to send in the robots.

Researchers are using several types of underwater robots during the March experiment. Slow-moving but long-lasting robots called “gliders” are cruising back and forth through the waters over the Shelf and further offshore, monitoring the water flowing onto and off of the Shelf. Closer to shore, MBARI’s long-range AUVs (LRAUVs) are following two intersecting paths across the Shelf. One LRAUV travels back and forth across the Shelf six times a day. The other LRAUV travels in a rectangular path over the shelf and parallel to shore three times a day. All of these underwater robots carry instruments to measure water temperature, chemistry, and chlorophyll (an indicator of algae in the water), as well as other sensors.

When one of these robotic “sentries” finds a significant patch of algae, researchers will send out MBARI’s “Gulper” AUV to figure out how big the patch is and where it’s going. As its name suggests, the Gulper AUV can also collect water samples, both outside and inside a patch of algae. At this stage, the Gulper AUV’s artificial intelligence comes in handy. Not only can the AUV change its course to find the densest layers or patches of algae, it can also be programmed to follow the patches as they drift with the currents. 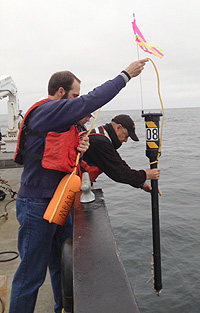 After finding a patch of algae, the next step is to try to follow the patch as it drifts with the currents. Based on data from the Gulper AUV, the researchers will place “drifters” at the depths and locations of dense patches of algae. By following these drifters from day to day, the researchers hope that they can also follow the bloom as it moves and evolves over time. The researchers are also using computer models to understand where ocean currents are flowing, and to predict how these currents might change over subsequent days.

Although many gliders and AUVs can detect algal blooms based on the amount of chlorophyll in the water, it is much more difficult for researchers to figure out what types of algae are present in the bloom. Traditionally scientists have had to do this by collecting water samples at sea, bringing them back to shore, then examining them under a microscope.

MBARI’s Environmental Sample Processors (ESPs), however, can perform such tests automatically and send the results back to shore within a matter of hours. For this experiment, MBARI researchers have placed one ESP about 25 meters below the surface, near the outer part of the shelf, to detect subsurface algal blooms. The second was placed in shallower water closer to shore to detect blooms nearer the surface. The ESPs can also detect how much toxin the algae may be producing. Researchers control the ESPs from shore, telling them to sample more frequently if a bloom is passing by or taking place near the instrument.

Complementing the work of the ESPs, researchers from several institutions will use the water samples collected by the Gulper AUV and research vessels to perform their own DNA analyses. They will also grow the algae in the lab to figure out how healthy they are and how fast they are growing and reproducing. By growing the algae under different amounts of light and nutrients, researchers can figure out how environmental conditions affect algal growth rates and the amount of toxin they produce. 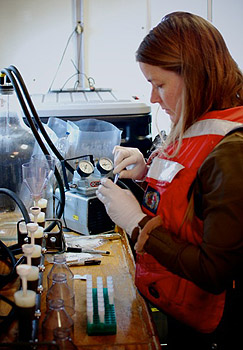 Hope for the future

For decades, oceanographers have tried to figure out why harmful algal blooms on the California coast occur more often at certain locations, or during some years but not others. So far they have had only limited success. However, according to John Ryan, a biological oceanographer at MBARI, “We now have the observing resources to answer these longstanding questions.”

By combining the data from all of these robots, ships, lab experiments, and models, researchers will get a detailed view of what physical conditions are most likely to trigger harmful algal blooms in San Pedro Bay. These results can then be incorporated into state-of-the-art computer models.

Like weather-forecasting models, these ocean models do a pretty good job at predicting physical processes such as winds and currents. The hope is that, within a few years, scientists will be able to take the models’ wind and current predictions and use these to predict biological events such as algal blooms. 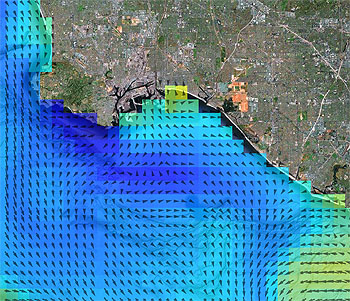 This image shows a forecast of the temperature of surface waters (blue and yellow shading) and currents (black arrows) made by the Regional Ocean Modeling System (ROMS) computer model during the ECOHAB experiment. Similar models may eventually be able to forecast the locations of harmful algal blooms. Base image: Google Maps

But that’s not the end of the story. As Ryan explains, “The ECOHAB experiment is part of a larger NOAA initiative that has three phases—first to understand the ecology of these blooms, then to find ways to monitor and respond to them, and finally to figure out ways to prevent or mitigate their impacts. That’s the real end game.”

Jun 5, 2017 – In the spring of 2015, Monterey Bay experienced one of the most toxic algal blooms ever. A new paper shows that this bloom became particularly toxic because of an unusually low ratio of silicate to nitrate in Bay Waters.
May 21, 2014 – It’s now late May and the spring 2014 ECOHAB field experiment is winding down. Researchers from the University of Southern California (USC) are still conducting occasional surveys of the San Pedro Bay, but the rest of the instruments have been recovered.
Apr 9, 2014 – In late March 2014, like stealthy electronic sharks, two underwater gliders began cruising the ocean in and around San Pedro Bay, off Southern California. But instead of looking for a meal of fish or sea lions, these robotic vehicles were looking for signs of microscopic algae.

MBARI’s Controlled, Agile, and Novel Observing Network (CANON) Initiative is an interdisciplinary effort that utilizes smart, autonomous devices designed to cooperate with each other to collect oceanographic information.