The Answer to Animal, Plant, Mineral, or Man-Made: #5 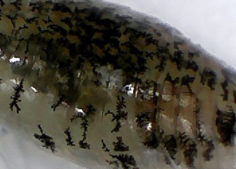 Clue: We’d like to keep several feet between us and the identity of this mystery picture. 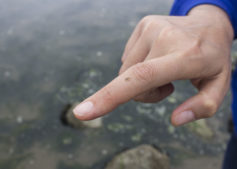 A small marine isopod rests on the finger of a brave intern. Image courtesy Emma Bueren.

It’s a marine isopod, found in the entrance channel of the Elkhorn Slough.

Look closely and you can see the hint of the isopod’s translucent legs. Image courtesy Emma Bueren.

The word isopod comes from the Greek roots “iso” and “pod,” which when combined mean “same foot.” Although they are difficult to see in the photo, all isopods have seven legs, as well as an additional five appendages which allow the creature to breathe.

If these creatures seem a little prehistoric to you, you’re not wrong. These earliest fossil records of ancient isopods appear around 300 million years ago at the end of the Paleozoic period, before even the oldest dinosaurs began appearing!

Currently, there are over 10,000 species of isopods which can be found on both land and in water. Of the water-dwelling isopods, most are found in marine environments such as the seafloor or intertidal zones, which is where this isopod was found. Although this specific isopod is quite small, the sizes of other isopod species can range anywhere from 0.3 millimeters to a whopping 50 centimeters (20 inches). The largest isopod is Bathynomus giganteus, which is found on the floors of the deep sea.

One good way to catch a small swimming isopod like this one is to simply stick your finger in area where they’re swimming, as they’ll come right up to your finger.

This picture stumped everyone, so the honorary winner is Kyra Schlining. Kyra guessed the mystery photo was a purple-striped jellyfish (Chrysaora colorata). Although not correct, we did find happen to find an isopod sitting on top of that exact species of jellyfish—quite the coincidence! 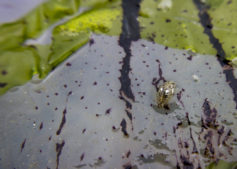 An isopod rests comfortably on the top of a purple-striped jellyfish. Image courtesy Emma Bueren.