Testing the effects of ocean acidification on juvenile rockfish 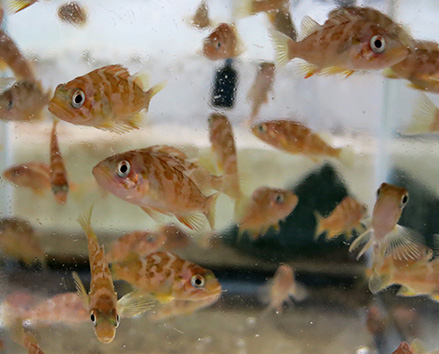 Juvenile copper rockfish such as these may have a harder time exerting themselves as seawater becomes more acidic. Image: © 2016 Will Fennie

A new paper in the journal PLOS One shows that some species of juvenile rockfish find it harder to exert themselves in acidified seawater, but other species are more adaptable. The study used a variety of methods to measure the fishes’ behavior, physiology, and genomic responses to ocean acidification.

The experiments for this paper were conducted in MBARI’s state-of-the-art seawater laboratory, which allows researchers to control temperature, acidity, and oxygen content of seawater in which animals are raised for weeks or months at a time. In this case, the researchers changed the acidity of the seawater by regulating the amount of dissolved carbon dioxide in the water.

Although the lab work was conducted at MBARI with support from Senior Scientist Jim Barry and Senior Research Technician Chris Lovera, the project involved researchers from a number of research institutions. Scott Hamilton, the lead author of the study, and Hamilton “Will” Fennie, who performed most of the  lab work, are affiliated with Moss Landing Marine Laboratories (Fennie is now at Oregon State University). Cheryl Logan, who led the genomics portion of the study, is an assistant professor at California State University, Monterey Bay. Researchers from the University of California, Santa Cruz, and NOAA’s National Marine Fisheries Service also worked on the project.

The researchers found that copper rockfish raised in water with high concentrations of carbon dioxide swam slower and had a harder time exerting themselves than those raised in “normal” seawater. Blue rockfish, however, showed no significant behavioral or physiological effects under the same conditions.

“This could mean juvenile copper rockfish may find it harder to escape from predators and locate prey, and could reduce population sizes over time,” said Logan. 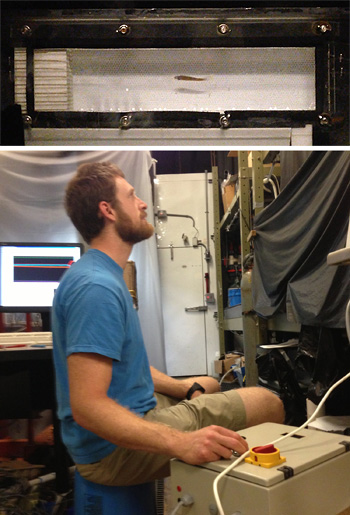 This experiment was unique in that the researchers were able to measure behavioral, physiological, and transcriptomic changes in the same individual animals. Transcriptomics allows biologists to figure out which genes are active in an organism at any given time. Unlike an organism’s genome, which remains relatively constant, a transcriptome may change over time in response to environmental conditions.

Logan’s role in the study was to examine the genes of all the fish in the experiment, looking for subtle ways in which their bodies were adapting to the stresses of a higher carbon dioxide environment.  As Logan wrote, “changes in expression of muscle contractile genes…could be a sign that blue rockfish can alter the structure of their muscles to maintain normal swimming speeds in more acidic waters. In other words, blue rockfish may be better at acclimatizing to the new conditions.”

The researchers suspect that the differences in sensitivity between species may be related to where these fish spend their formative months as juveniles. Although juveniles of both species live in the kelp beds, copper rockfish juveniles live close to the surface, where carbon dioxide levels in seawater may be reduced by exchange with the atmosphere or through photosynthesis by fast-growing kelp fronds.

In contrast, juveniles of blue rockfish live closer to the seafloor, where carbon dioxide concentrations may be higher due to the accumulation of carbon dioxide from the respiration of animals near the seafloor. Seafloor areas may also be exposed to plumes of cold, carbon-dioxide-rich bottom water that are occasionally carried toward the coast by “upwelling” events. Because blue rockfish are exposed to higher carbon-dioxide levels as juveniles, the researchers hypothesized that they may be more tolerant of higher carbon dioxide conditions that could occur along the Central California coast over the coming decades.

Alternatively, the researchers note, “the increased sensitivity of copper rockfish could be a result of their smaller size and younger age at settlement.”

These aquaria were used to test the effects of different amounts of ocean acidification on rockfish in MBARI’s seawater lab. Image: © Will Fennie 2016

Although many species of rockfishes live in Monterey Bay, as Logan pointed out, “There is not a one-size-fits-all response among this closely related group of fishes. There will be winners and losers.”

Juvenile rockfish are an essential part of coastal food webs, providing food for many seabirds, marine mammals, and other fishes. If some types of rockfish become more numerous and others disappear, this is likely to have ripple effects on other animals in Monterey Bay, as well as potentially negative effects on coastal fisheries and communities.

In closing their paper, the researchers noted that “Many temperate [fish] species may already be experiencing end-of-the-century predictions of pH for short durations, but exposure to these low pH conditions is predicted to be more frequent and longer in duration in the future.”

MBARI’s seawater lab will soon be able to simulate these kinds of transitory changes in ocean acidity. According to Barry, “The aquarium system used for the rockfish study was designed to mimic the very stable levels of acidity and oxygen in deep-sea environments. A far more advanced system capable of regulating oxygen, carbon dioxide, and temperature over short time scales is nearly complete. This “upwelling simulator” will allow us to test hypotheses concerning the effects of the frequency, duration, and severity of upwelling events on various marine taxa.”

New research systems like MBARI’s seawater lab are improving climate-change studies by providing more realistic environmental conditions. Such systems will help researchers tease out the effects of short-term environmental fluctuations, as well as the combined effects of increasing acidity, decreasing oxygen, and rising temperature, all of which may affect coastal waters over the next 50 to 100 years.

Jan 19, 2017 - A new paper in the journal PLOS One shows that some species of juvenile rockfish find it harder to exert themselves in acidified seawater, but other species are more adaptable.
MBARI’s technologies for carrying out experiments in situ have proven extremely valuable for addressing questions related to ocean acidification, expansion of oxygen minimum zones, and the emergence of dead zones.
Carbon dioxide emissions to the atmosphere have raised atmospheric CO2 levels far beyond the range of variation known to occur for the past million years, and perhaps as much as 30 million years.