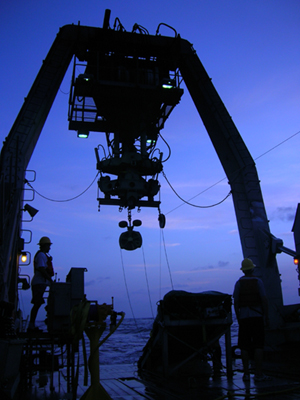 Research cruise on the R/V Seward Johnson from Bardados to Cape Verde and back, Summer 2006

There are still many uncultured marine protists – including within the pico-size fraction. An approach developed in the lab that has generated new discoveries on their evolution and ecology has been sequence partial genomes from cells taken directly from the environment. Because these pico algae have quite large genomes (especially as compared to bacteria), pursuing metagenomic information using “bulk samples” (i.e. collecting cells by filtration of many liters of seawater) has been challenging, and complex to tease apart bioinformatically. Starting in 2005 we combined flow sorting with multiple displacement amplification (developed in Roger Lasken’s lab) in order to specifically target and sequence picophytoeukaryote populations. Our interest has been in sequencing population metagenomes as opposed to single cells. Using this approach we published the first genome sequence (partial genome) for a haptophyte – in this case a pico-prymnesiophyte (Cuvelier et al. PNAS 2010), and a partial Bathycoccus genome (Monier et al. EM 2012, epubl Sept 2011) as well as the complete chloroplast genome of a wild pelagophyte (Worden et al. Current Biology 2012).

Some of these targeted metagenomes have now been used to analyze traditional Bulk Metagenomes from a well characterized transect from the Pacific coast to open ocean waters (Line 67) and other locations. High resolution contextual environmental data has been analyzed by a number of MBARI scientists — including Ken Johnson and Francisco Chavez. Melding Targeted Metagenomics with Bulk Metagenomics (using the Targeted Metagenomes as reference genomes for uncultureds) revealed the global distribution of a wild Pelagomonas, using a reference plastid genome sequenced directly from the environment (Worden et al. Current Biology 2012), as well as interesting HGT patterns between Ostreococcus andBathycoccus with marine prasinoviruses (Monier et al. EM 2012, epubl Sept 2011).