This photomontage shows some of the small animals that colonized bundles of acacia wood that sat on the deep seafloor, 3,200 meters below the surface, for five years (note penny for scale). The animals include boring clams (lower left), polychaete worms (upper left and lower right), snails and limpets (bottom), shrimp-like tanaids and amphipods (center), and a crinoid sea lily (middle right). Image: Craig McClain © 2012 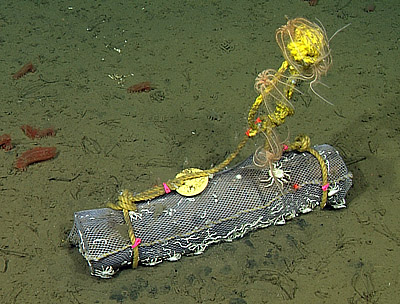 This photo shows one of 36 bundles of acacia wood that sat on the deep seafloor for five years as part of Craig McClain’s wood-fall experiment. The bundle is held together by a mesh bag that allows the tiny larvae of deep-sea clams and other animals to colonize the wood. Galatheid crabs crawl around the outside of the mesh while brisingid sea stars attach to the yellow rope that allows MBARI’s submersibles to lift the wood without damaging it. Image: © 2012 MBARI

When it comes to food, most of the deep sea is a desert. Many seafloor animals feed on marine snow—the organic remnants of algae and animals that live in the sunlit surface waters, far above. However, marine snow only falls as a light dusting and doesn’t have much nutritional value. Thus, any other sources of food that reach the deep sea provide a temporary feast. Even bits of dead wood, waterlogged enough to sink, can support thriving communities of specialized animals. A new paper by biologists at the National Evolutionary Synthesis Center and the Monterey Bay Aquarium Research Institute (MBARI) shows that wood-boring clams serve as “ecosystem engineers,” making the organic matter in the wood available to other animals that colonize wood falls in the deep waters of Monterey Canyon.

In 2006, marine biologists Craig McClain and Jim Barry used MBARI’s remotely operated vehicle Tiburon to place 36 bundles of acacia wood on the canyon floor, 3,200 meters below the sea surface. Five years later, they retrieved the bundles and McClain painstakingly picked out every animal that had colonized the logs.

McClain performed a variety of statistical analyses on the different types of animals found in each of the bundles, looking for differences and similarities. The results were surprising. Even though all of the bundles contained exactly the same type of wood and were placed on the seafloor at the same time, within a few tens of meters of each other, there were huge differences in the numbers and types of animals from one bundle to another.

Some of the bundles had been heavily colonized. The seafloor around and under these bundles was carpeted with tiny wood chips and fecal pellets from wood-boring clams, as well as bacteria and fungi that help decompose this organic matter. Other wood bundles had few, if any animals living in them, and lacked these “halos” of discolored sediment. 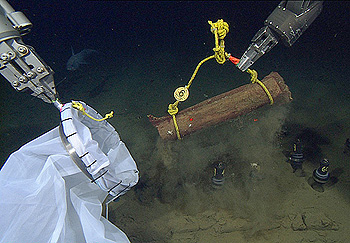 Researchers use the two manipulator arms on MBARI’s remotely operated vehicle Doc Ricketts to collect a bundle of acacia wood 3,200 meters below the surface. The arm on the right has picked up the wood bundle by its yellow rope handle. This bundle will be placed inside the white collecting bag being held by the arm on the left. Image: © 2012 MBARI

McClain’s statistical analysis showed that as the wood got older and more heavily colonized by wood-boring clams (Xylophaga zierenbergi), the types and abundances of other animals also changed. Boring clams are one of the few marine animals that can digest the cellulose in wood. Like termites, these clams have specialized symbiotic bacteria in their bodies that help them digest cellulose. As McClain put it, “Without these wood-boring bivalves, the carbon energy in the wood would not be available to other species.”

McClain calls these clams “ecosystem engineers.” He explains, “Like oysters, beavers, and termites, these boring clams alter the landscape and provide new habitat for other species.”

As they eat their way through a sunken log, boring clams create lots of small holes in which other animals can hide. Their wood chips and feces provide food for a variety of smaller animals. And the clams themselves provide food for specialized predators.

The details of these interactions are still poorly known. For example, after boring clams, the most common animals McCain found in his bundles were tiny, shrimp-like crustaceans known as tanaids. The authors speculate that these tanaids may prey directly on the boring clams. Alternatively, the tanaids may consume the fecal pellets of boring clams and the bacteria associated with them (any organic matter is precious when you’re three kilometers below the ocean surface). 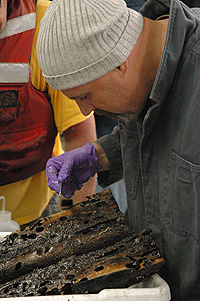 Craig McClain, lead author of this study, collects small animals from a piece of wood that was left on the seafloor for several years. Note the large holes created by boring clams, which set the stage for later colonizers. Image: Kim Fulton-Bennett © 2013 MBARI

The statistical analyses also showed that large logs supported more diverse communities of animals than small logs. The researchers speculated that larger logs may provide food for a longer time period, which attracts more secondary colonizers, such as deep-sea snails. McClain explained, “Snails, contrary to what you might expect, are metabolically expensive. They may need a lot of energy, such as that found a large wood fall, to support a viable population.”

McClain said, “The part that really excites and puzzles me is that not all the wood falls were colonized at the same time. At the end of the experiment some wood was not bored or bored very little. This didn’t reflect the placement, size, cut, or surface area of the logs. Basically it appears that the recruitment of larval clams into the wood fall was a nearly random process, even for logs that were just a few meters from one another.”

The rate at which a wood fall is colonized makes a big difference to deep-sea organisms living nearby. The faster that a piece of wood is colonized, the more rapidly its organic matter is made available to non-wood-eating animals. Thus, hard woods or woods containing clam-repellent compounds, might last much longer than soft woods, and might provide less food for animals on the nearby seafloor.

Whatever the reason, these differences in colonization from one wood fall to another created a wide variety of habitats and animal communities over a relatively small patch of seafloor. Thus, this study adds to the growing body of evidence that, although the deep seafloor may look flat and uniform, its animal communities often vary considerably over both space and time.

For additional information or images relating to this article, please contact: