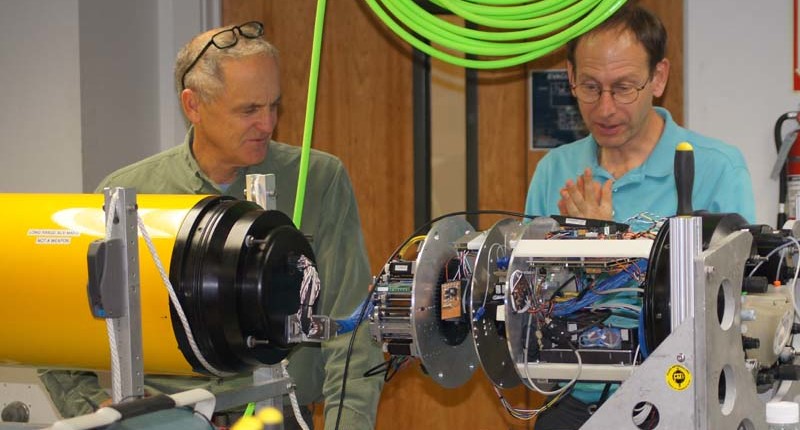 Engineers Brett Hobson and Brent Roman discuss the joining of the third-generation Environmental Sample Processor to the front of the long-range autonomous underwater vehicle.

A significant milestone was reached for MBARI technology development with the first flight of long-range autonomous underwater vehicle Makai containing the third-generation Environmental Sample Processor (3G-ESP) December 18-21, 2015.  The Environmental Sample Processor (ESP) is a robotic microbiology laboratory that can filter water samples and either preserve the filtrate until recovery, or process the filtrate autonomously using a variety of molecular-probe techniques. Normally the ESP is deployed in one location in a large pressure housing roughly the size of a 50-gallon drum. A major redesign of the ESP makes it mobile, by placing it in the payload section of a long-range autonomous underwater vehicle LRAUV).

This version of the 3G-ESP contained cartridges for processing five separate samples.  Four samples were collected within “archival” cartridges, each storing preserved filtrate. The fifth sample was taken in a newly developed cartridge that can add a lytic agent and apply heat to create a lysate, and save that lysate for further processing. The Makai vehicle was instructed to take two archival samples in shallow water (approximately seven meters), then dive deep (about 25 meters) and take the remaining archive samples and the lysis sample. Due to communications issues between the vehicle and the ESP, only samples 1, 4, and 5 were captured. Those samples were returned to the laboratory for processing. 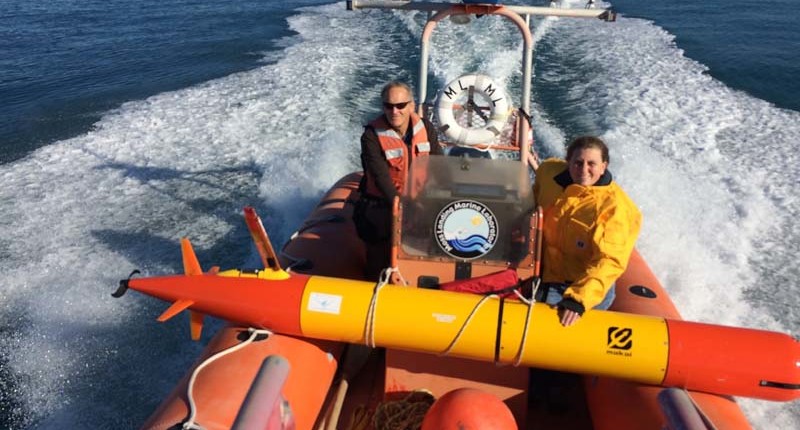 Deployment of the Makai LRAUV with Brett Hobson and Chris Preston. Preston’s left hand rests
on the payload section where the 3G ESP resides.

Close-up of the 3G ESP with five cartridges loaded (left-of-center).