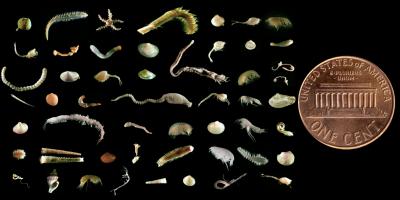 This montage shows some of the tiny marine animals called macrofauna that live and feed in the muddy bottom of Monterey Canyon. These animals include miniature snails, worms, clams, and a variety of crustaceans. McClain and Barry’s work shows that communities of these animals below canyon walls are less diverse than those elsewhere on the floor of the canyon. Image (c) 2010 Craig McClain

With dimensions comparable to the Grand Canyon, it’s no surprise that Monterey Canyon harbors a variety of different seafloor habitats. But even on the flat, muddy floor of the canyon, animal communities vary considerably, according to a new paper by marine biologists Craig McClain and James Barry.

Working with Barry as a postdoctoral fellow at MBARI, McClain (now at the National Evolutionary Synthesis Center) collected sediment samples in the floor of Monterey Canyon and analyzed the numbers and types of tiny animals (0.25 to 25 mm in size) living in the sediment. Within 15 to 30 meters (50 to 100 feet) of the canyon walls, the researchers found just a few species of animals in the sediment, and these animals were relatively small. Farther from the canyon walls, the researchers found a greater variety of animals and a greater total amount of living matter (biomass) in the sediment.

This discovery was surprising because organic material falling down from the canyon walls should have provided more food for seafloor animals near the edges of the canyon. However, the researchers also noted that large, mobile animals, such as sea stars and sea cucumbers, were almost twice as common near the canyon walls as in the middle of the canyon.

In their recent paper, McClain and Barry speculate that the large mobile animals were able to take advantage of the abundant food supply near the canyon walls. By eating up all the extra food and disturbing the sediment, the larger animals apparently made it harder for a diverse community of tiny animals to evolve near the canyon walls.