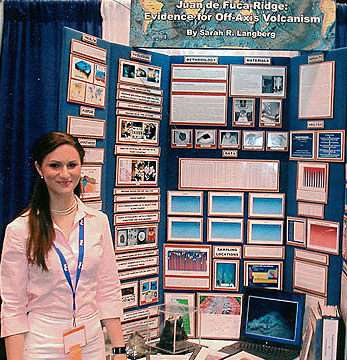 Using rock samples from MBARI expeditions to the Juan de Fuca Ridge, a high school student from Fort Myers, Florida won one of three Grand Awards at the Intel International Science and Engineering Fair last month. This is the world’s largest and most prestigious high-school science competition, with 1,429 students from almost 40 countries competing. Sarah Rose Langberg won a $50,000 scholarship and numerous other awards for her analysis of rock samples provided by Michael Perfit, an MBARI collaborator based at the University of Florida. Like MBARI researcher Debra Stakes, Perfit and Langberg were trying to understand and document “off-axis volcanism.”

The Juan de Fuca Ridge, off the coast of Oregon, is an active seafloor spreading center, where the Earth’s crust is slowly splitting apart, releasing lava onto the ocean bottom. For years, geologists believed that volcanic activity was confined to the central axis of the ridge. Farther from the central axis, their models suggested that lavas would be older but of similar composition to those along the central axis. To test these models, Stakes and Perfit used MBARI’s remotely operated vehicle (ROV) Tiburon to collect samples from the ridge during 2000 and 2002.

Working under a grant from the National Science Foundation, Langberg analyzed lava collected at various distances from the central ridge axis. Using a variety of tools, including petrographic microscopes, an X-ray spectrometer, a computer model, and video tapes of the seafloor, she demonstrated that many off-axis lavas were geologically and chemically different from those along the main axis. She hypothesized that these lavas had come from a similar initial source as the axis lavas but evolved differently on their way to the surface.

Langberg’s findings complement those of Perfit and Stakes, who believe that off-axis volcanism is quite common in this area, and represents a significant source of heat flow and lava discharge onto the sea bottom. Their research is changing our perspectives on how new seafloor forms, and what the resulting rocks look like. MBARI congratulates Sarah for her award-winning research and is happy to have played a part in that work. 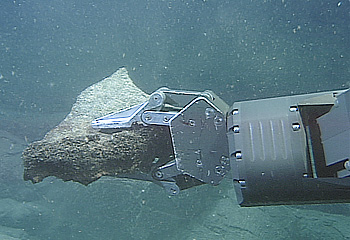 Langberg analyzed many samples such as this fragment of pillow lava being collected by MBARI’s remotely operated vehicle Tiburon on the Juan de Fuca Ridge. Photo (c) 2002 MBARI