People have long depended on healthy oceans for food, recreation and commerce. But this irreplaceable resource is in dire trouble, say marine scientists, largely because of human impacts—from pollution to poorly managed fisheries to climate change. 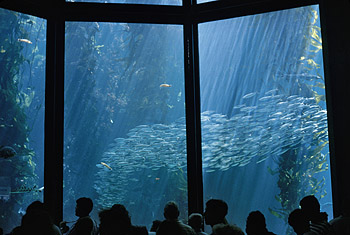 To address these and other major threats to the marine environment, Stanford University, the Monterey Bay Aquarium, and the Monterey Bay Aquarium Research Institute (MBARI) have joined forces to create the Center for Ocean Solutions, a new collaboration that will bring together international experts in marine science and policy to find innovative ways to protect and restore the world’s oceans.

The David and Lucile Packard Foundation provided a $25 million grant to establish the new center in Monterey, California, near the Monterey Bay Aquarium—one of the world’s top aquariums, with more than 42 million visitors since 1984—and Stanford’s Hopkins Marine Station, the oldest marine research lab on the West Coast. MBARI, a leading independent oceanographic research institution, is located in Moss Landing, California, about 20 miles to the north.

“It is with great pleasure that Stanford joins two world-class institutions, the Monterey Bay Aquarium and MBARI, to establish the Center for Ocean Solutions—a unique forum where marine scholars can develop effective solutions to one of the most critical environmental problems of the 21st century,” Stanford President John Hennessy said. “Stanford is widely recognized for its broad range of marine scholarship in biology, aquaculture, environmental law, and many other fields. But the problems we face—from polluted shorelines to collapsing fisheries—are so complex that they will only be solved by engaging in new collaborations that extend beyond the university.” 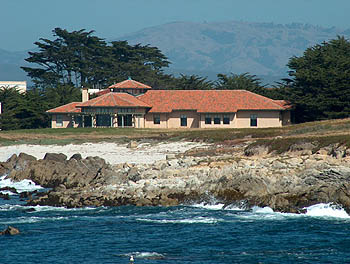 Although based in California, the center will confront problems that affect oceans worldwide, including climate change and overfishing. Recent studies warn that unless global warming is brought under control and the seas are managed in a sustainable way, most of the world’s commercial fisheries will collapse within 50 years, along with the majority of coral reef and mangrove ecosystems.

“The Monterey Bay Aquarium is pleased to collaborate in the creation of this new organization dedicated to solving the big conservation threats facing our oceans,” said Julie Packard, executive director of the aquarium. “For nearly 25 years, we’ve worked to inspire conservation of the oceans—through our exhibits, education programs, research, and by influencing ocean policy. This collaboration affords us a new and very promising avenue to create a future with healthy oceans. By combining top science talent with innovative policy ideas, I believe the center has the potential to produce fresh insights and practical solutions to achieve healthy ocean ecosystems for the future.”

Her comments were echoed by Marcia McNutt, president and chief executive officer of MBARI. Founded in 1987, MBARI operates state-of-the-art research vessels equipped for underwater exploration and develops new instruments and tools to answer basic questions about the marine environment.

“MBARI has become world renowned in the last 20 years for conducting innovative, challenging experiments and observations in the deep sea, thanks to our ability to forge an enduring partnership between scientists and engineers,” said McNutt, who also is a professor of geophysics at Stanford. “We are excited to begin MBARI’s third decade by forging yet another partnership to involve even broader communities such as law, business and economics. Together we will tackle the most pressing challenges facing mankind’s relationship with the ocean and look for creative and enduring solutions to those problems.” 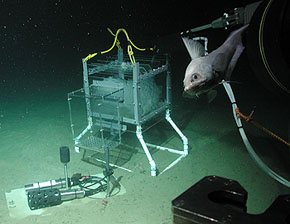 For more than a decade, marine chemists and biologists at MBARI have been studying the effects of elevated levels of carbon dioxide on marine organisms. Such research becomes ever more critical as human influences on the atmosphere and oceans accelerate. Image: © 2002 MBARI

The Center for Ocean Solutions will be managed by Stanford’s Woods Institute for the Environment, which is located on the main university campus about 90 miles north of Monterey. The university also will serve as the fiscal sponsor responsible for payroll and hiring.

“The Monterey Bay area has a breadth and depth of marine research that is unparalleled in the United States,” said Woods Institute co-director Jeffrey Koseff, a professor of civil and environmental engineering at Stanford. “The faculty at Hopkins are among the very best marine biologists in the world. Right next door is the Monterey Bay Aquarium, which has a phenomenal capacity to reach people and teach them in a very understandable way about the oceans. Just up the coast is MBARI, which is a world leader in deploying technology for oceanic exploration. And on the main Stanford campus there is a thriving community of oceanographers, engineers and legal scholars working on near-coastal ocean and fisheries challenges. Through the Center for Ocean Solutions, we can bring together all of this science, engineering, policy and outreach expertise and apply it to solving these critical environmental problems.”

“Unlike traditional academic partnerships, the center will have a results-oriented focus that brings experts and decision makers together to develop new strategies that lead to real change,” said Buzz Thompson, professor of law at Stanford and co-director of the Woods Institute. “During the next few months, we will be examining where the center can have the greatest impact and, therefore, we should be focusing our attention.”

As examples of the kinds of issues that may be addressed, Thompson pointed to three recent workshops sponsored by Stanford, MBARI, and the Monterey Bay Aquarium on ocean acidification caused by the absorption of excess carbon dioxide from the atmosphere into the sea; water pollution and other land-based threats to coastal ecosystems; and restoring Atlantic bluefin tuna populations.

A search is under way for a center director, who will be appointed to the Stanford faculty and will work under the leadership of an advisory council chosen by the three collaborating institutions. In the meantime, marine policy expert Meg Caldwell, a senior lecturer at Stanford Law School and at the Woods Institute, will serve as interim director.

“In the United States, there has been a clear lack of leadership on the part of government to solve the major risks facing our oceans, so there is a real opportunity vacuum that the Center for Ocean Solutions can fill,” said Caldwell, former chair of the California Coastal Commission. “One of our aspirations is to be really forward-looking—not only acknowledging immediate threats but being able to look well ahead and say, ‘These are issues that are going to confront society in the next generation, which we should be dealing with right now.’”

Other Monterey Bay area educational institutions, including the University of California-Santa Cruz and California State University’s Moss Landing Marine Laboratory, may join the Center for Ocean Solutions as well, Caldwell said, noting that part of the center’s mission is to improve graduate-level marine education in the region by developing student workshops and short courses on marine science and policy. The center also will sponsor fellowships for postdoctoral scholars and recent law and business school graduates, as well as offer training for decision makers from the public and private sectors.

“The center will be a tremendous asset to all of us engaged in this work as we continue to address the great challenges facing our oceans, along the coast of California, in our neighboring states, and around the world,” said Mike Chrisman, California state secretary for resources, who was appointed by Gov. Arnold Schwarzenegger in 2003. Chrisman also chairs the California Ocean Protection Council, a state agency that helps coordinate management of California’s ocean resources.

“The problem right now is that we take our oceans for granted,” said Leon E. Panetta, co-director of the Leon & Sylvia Panetta Institute for Public Policy at California State University-Monterey Bay and co-chair of the national Joint Ocean Commission Initiative. “The reality is that we have a responsibility as good stewards to ensure that this great resource is protected for the future.”

A former White House chief of staff during the Clinton administration and past chair of the Pew Oceans Commission, Panetta now serves on the board of directors of the Monterey Bay Aquarium. “I grew up and live in Monterey, where boundless catches of sardines and bustling canneries served and supported fishermen and their families,” he said. “When the sardine industry collapsed, the lives and businesses that depended on that seemingly endless resource also collapsed. The Center for Ocean Solutions will go a long way in preventing that kind of devastation, which threatens other fishing communities along our coasts.”