The S. S. Montebello transported oil across the Pacific from 1921 until 1941, when it was sunk by a Japanese submarine. Photo courtesy of Montebello Task Force.

Experts hope to use sonar images of a sunken ship off California’s coast to determine whether the vessel is at risk of leaking oil. The Monterey Bay Aquarium Research Institute (MBARI) sent a robotic submersible down to the wreck of the S. S. Montebello last week in an effort to assess the condition of the ship. The Montebello was torpedoed by an Imperial Japanese submarine during World War II seven miles off the coast near Cambria. The vessel sits on the seafloor at a depth of approximately 275 meters (900 feet), presumably with its tanks full of Santa Maria crude oil.

“Although it is still uncertain whether or not the three million gallons of oil loaded onto the vessel before its departure on December 23, 1941 remain in its tanks, we aren’t taking any chances,” said Steve Edinger, Administrator for the Department of Fish and Game’s Office of Spill Prevention and Response (OSPR). “We are taking proactive steps to determine if there is a pollution threat and, if so, to prevent an oil release that could impact California’s coastal areas.” 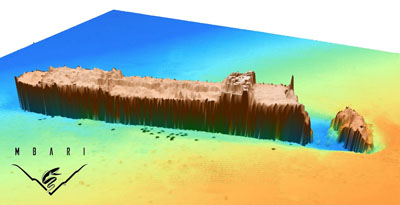 This image, created using sonar data from MBARI’s seafloor mapping AUV, shows the wreck of the S. S. Montebello, about 275 meters (900 feet) below the sea surface. The bow of tanker is to right. An amazing amount of detail can be seen, including remnants of the ship’s forward mast.

The Montebello Assessment Task Force commissioned the sonar survey to determine if the Montebello poses a pollution risk to California marine waters and coastal habitat. The task force was convened in 2008 at the request of Assemblyman Sam Blakeslee and includes representatives from OSPR, the U.S. Coast Guard, the National Oceanic and Atmospheric Administration, California Department of Transportation (Caltrans), the Monterey Bay National Marine Sanctuary, Monterey Bay Aquarium Research Institute (MBARI), and Assemblyman Sam Blakeslee’s (R-San Luis Obispo) Office. OSPR has provided $100,000 in funding from its Oil Spill Prevention and Administration Fund for this and other research on the Montebello. The task force is working with federal agencies to secure additional funding for the project.

By studying the Montebello using a sonar-equipped, robotic submersible, researchers hope to determine the full extent and overall layout of the wreckage, as well as to better understand the nature and stability of the surrounding seafloor. This information will be used to coordinate two more dives planned for next summer and fall to further assess the vessel’s condition and whether or not there is oil in its tanks.

Next year’s dives will include sending a remotely operated vehicle (ROV) down to the Montebello to obtain video of its physical condition. This video will be compared to video that was taken in 1996 and 2003 in order to assess the extent of any exterior corrosion. The subsequent dive would take samples from the cargo tanks to determine if oil remains on board. 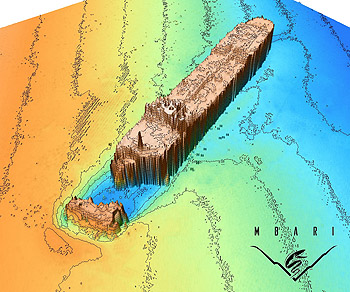 This sonar image shows the bow of the S. S. Montebello, which broke off when the ship sank to the seafloor. The image also includes bottom contours that indicate the shape of the surrounding seafloor.

During last week’s three-day expedition, sonar images of the ship and surrounding seafloor were taken using one of MBARI’s autonomous underwater vehicles (AUVs). This robotic underwater vehicle is programmed at the sea surface and then travels through the water, collecting data as it goes. After the AUV returns to the surface, researchers retrieve the data and create images using MBARI-designed computer software called MB-System.

MBARI’s seafloor-mapping AUV carries three different types of sonar. This sonar system sends brief pulses of sound toward the seafloor, then measures how quickly and how intensely these sound waves are reflected back to the vehicle. These sonar systems include: 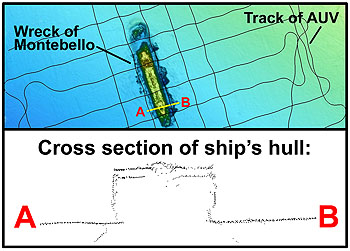 “This is an opportunity to work proactively and collaboratively to protect our coast from a potential environmental threat,” said Blakeslee. “I continue to be impressed by the enthusiasm and commitment of the all of the members of the Task Force. I look forward to continuing to work closely with the team to deal with the wreckage of the S. S. Montebello.”