Sleepover at the aquarium 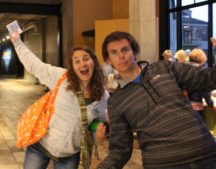 Rachel and David are excited to spend the night at the aquarium. Image courtesy Emma Bueren

After their exciting morning tour at the Monterey Bay Aquarium a few weeks ago, the interns wanted more. Saturday, June 8, the interns grabbed an assortment of sleeping bags, mattress pads, and pillows and decided to sleep with the fishes—that is, spend a night at the aquarium. 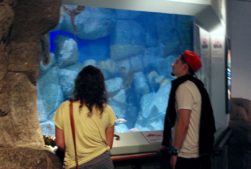 Once checked in at the Monterey Bay Aquarium Sleepover, the interns were able to wander among the tanks and admire the creatures. Some, like octopuses, are more active at night. They put on quite a show for the interns as they swam by, suction-cupped along the glass walls, and spread their tentacles far and wide. 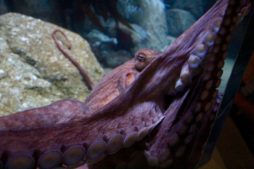 A close-up of the Giant Pacific octopus, curious to see who’s sleeping outside his tank. Image courtesy Emma Bueren

The interns were entranced by the jellyfish and could have stayed all night, but unfortunately, while jellyfish don’t need to sleep, interns do! 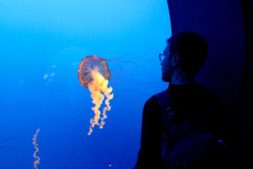 Although the sleepover is open to the public, the MBARI interns were allowed to sleep in the Vanishing Sea Life exhibit, where they’d be able to watch the bottom of the Open Sea exhibit. Tuna, dolphin fish, a stingray, and even two sea turtles took turns trying to lull the interns to sleep, but it was counting the shimmering, swirling school of sardines that finally put them under. 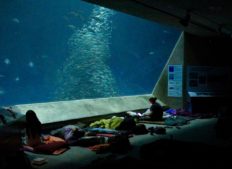 The view from the “bedroom,” featuring a tornado-like school of sardines—a sardine-nado? Image courtesy Emma Bueren