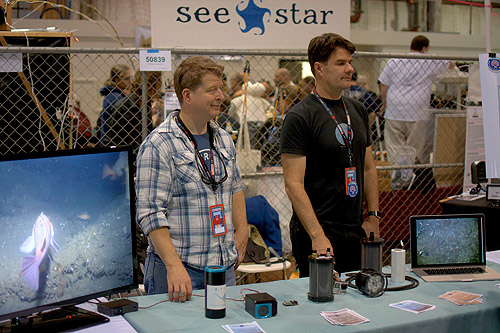 Steve Haddock and Chad Kecy debut the SeeStar camera system at a booth at the Maker Faire in San Mateo, California. Photo taken by François Cazenave.

Scientist Steve Haddock, Electrical Engineer Chad Kecy, and Mechanical Engineer François Cazenave introduced the SeeStar camera system at the Bay Area Maker Faire, a large festival held May 16th and 17th to celebrate invention and creativity by showcasing creations that relate to science, engineering, or art. The SeeStar camera system was originally built for Haddock, who wanted a cheap and easy way to document jellyfish blooms. MBARI engineers, led by Kecy, developed the SeeStar system using inexpensive, off-the-shelf components. It is available as an open-source project so that others can easily learn how to build their own SeeStar system. Haddock and Kecy introduced SeeStar to thousands of visitors at the Maker Faire including engineers and technologists with great ideas and suggestions. Read more about the camera system.