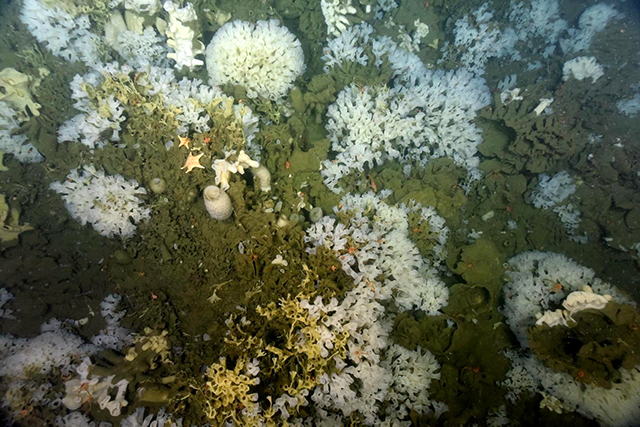 A new study published in the Marine Ecology Progress Series examines how sediments from human activities like bottom trawling for fish, are affecting different species of reef-building glass sponges in northern British Columbia, Canada. MBARI Postdoctoral Fellow Amanda Kahn participated in the study that looks specifically at three species of glass sponge. “Sponges form the foundation of unique habitats for many other fish and invertebrates, plus they affect the plankton and nutrients in the water around them through their filter feeding activity,” says Kahn.

As filter feeders, sponges process huge volumes of water each day—about 900 times their body volume every hour. Sponges consume 90-95 percent of the bacteria present in the water. These bacteria are too small for most other organisms to feed on, but once they are digested by the sponges the nutrients are then available to other detritus feeders, like sea cucumbers, that consume seafloor sediment. 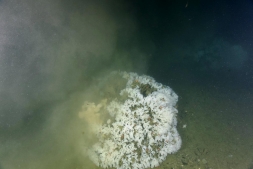 A plume of suspended sediments obscures the view of Farrea occa and Heterochone calyx. Image by Sally Leys, University of Alberta/CSSF ROPOS.

This filtering ability, however, makes them sensitive to increased sedimentation from human activities like bottom-contact fish trawling. Although sponges need sediment to survive, some can become clogged or damaged when turbidity increases, while others significantly reduce or stop pumping water altogether when levels of suspended sediments are too high. This behavior reduces the amount of food they consume and affects their survival.

In 2017, Canada’s government established the Hecate Strait and Queen Charlotte Sound Glass Sponge Reefs as a marine protected area (MPA). The goal of this MPA was to safeguard 2,410 kilometers squared (930 square miles) of glass sponge reef habitats, home to a myriad of invertebrates and commercially viable fish species like halibut and rockfish.

Kahn explains, “These marine protected areas were created to protect the reefs from direct damage by trawling, but a major indirect impact of trawl fishing is elevated sediment concentrations in the water—the dust cloud kicked up after the seafloor has been disturbed.” Buffer zones adjacent to the protected areas allow some fishing, and the researchers are eager to learn if indirect impacts from these buffer areas exist and how they may affect species within the conservation zone. 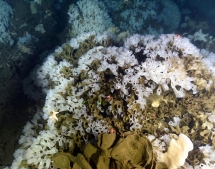 To understand how sedimentation affects the sponges, the researchers deployed various underwater instruments on a sponge reef. They measured water flow rates in and around individual sponges as well as suspended sediment concentrations in the surrounding water under natural conditions. They also conducted experiments simulating conditions of increased sedimentation.

The experiments revealed that sponges are indeed sensitive to changes in sedimentation within their surrounding environment. Study Lead Sally Leys notes, “The results we got were really enlightening—we confirmed that the sponges do shut down pumping when even just dusted with sediment. Our models of sediment transport show that trawls would have an instant effect on sponge filtration if they are even at the edges of the current boundaries of the MPAs and so the boundaries need to be revisited.” 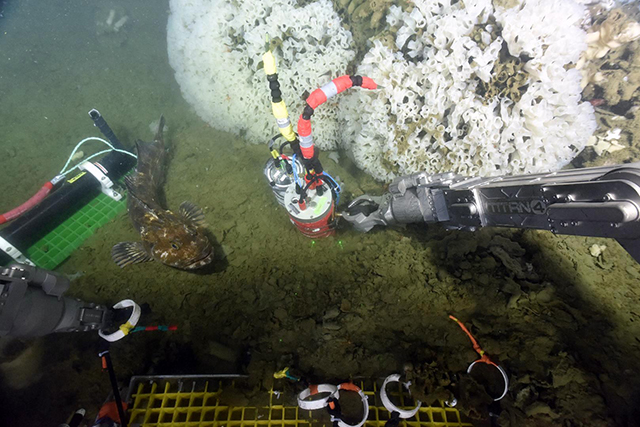 A lingcod sits among the various sensors being deployed to monitor the responses of sponges to sediments kicked up into the water column. Image by Sally Leys, University of Alberta/CSSF ROPOS.

Their findings also suggest that each species is specifically adapted to the sediment concentrations natural to their habitats—two of the species react to slight increases in sedimentation because they are unaccustomed to higher concentrations. These more sensitive species may be unable to adjust their feeding behavior to changes in sedimentation. Leys adds, “Glass sponges have different sensitivities, so their physiology is adapted to particular conditions.”

Here at MBARI, Kahn works closely with the Benthic Biology and Ecology Group to study coral and sponge communities off the central coast of California in an area called Sur Ridge. The team recently found evidence of bottom trawling near Sur Ridge and is conducting research to understand the physiology and activity of corals and sponges near these previously fished sites.

“This research shows that protecting sensitive seafloor habitats like sponge grounds and coral communities involves protecting them from more than just direct damage,” Kahn said. “It also means that buffer zones around these sensitive habitats should be large enough to protect them from indirect impacts like sediments that get suspended in the water column due to human activities.”