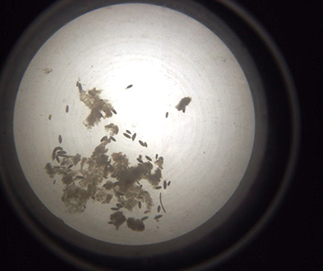 The Sedimentation Event Sensor (SES) was first deployed at Sta. M in 2012. The SES is a sediment trap that images the sample rather than collecting it, allowing for a temporal resolution of hours rather than days, and more detailed analysis of sediment components. In the image on the left, individual fecal pellets can be identified and counted. The SES also records fluorescence allowing for relative estimates of chlorophyll content in samples