Scientists use remotely operated vehicle to dive underneath Antarctic icebergs 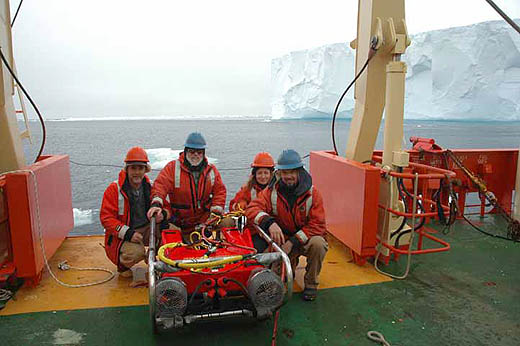 A team of scientists from MBARI’s Midwater Ecology group spent December studying oceanic animals around and underneath Antarctic icebergs. Using nets, sampling bottles, and a small remotely operated vehicle (ROV), they compared the animal communities associated with the icebergs to communities in the open ocean. This photo shows the MBARI research group and the ROV in front of Iceberg W-86 in Antarctica’s Weddell Sea. From right to left, the members of the team are Kim Reisenbichler, Bruce Robison, Karen Osborn, and Rob Sherlock.

Because of rising temperatures, an increasing number of icebergs have been breaking off from Antarctic glaciers and ice sheets to drift around the Southern Ocean. The MBARI biologists are part of a larger group of scientists who have been studying how these drifting icebergs affect the distribution of marine animals and algae in Antarctic waters. The midwater researchers worked with Ken Smith of Scripps Institution of Oceanography under a grant from the National Science Foundation.

The science team first examined satellite images to select which icebergs they wanted to study. Then, using the Antarctic research vessel Laurence M. Gould, they carefully approached the selected icebergs. They lowered a variety of oceanographic equipment into the ocean to measure the chemical and physical properties of the surrounding seawater and to collect samples of the marine animals and algae.

In order to collect samples around and underneath the icebergs, the MBARI team had to develop new sampling methods and build sampling devices that could fit on the tiny ROV. After spending several weeks flying the ROV beneath these massive blocks of ice, all four members of the team are now qualified ROV “ice pilots.”

January 28, 2020 – In an intricate underwater robot ballet, two of MBARI's underwater robots recently shot video of each other in the depths of Monterey Bay.
July 24, 2018 – A recent paper in ScienceRobotics describes a new bio-inspired sampling system that was tested using MBARI's remotely operated vehicle Ventana.
March 23, 2018 – A recent issue of Oceanography magazine includes ten articles that highlight a few of MBARI’s accomplishments, as well as ongoing research and development.