Scientists and decision makers discuss the fate of the ocean 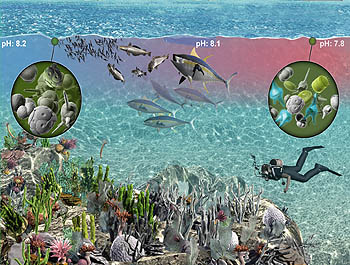 This illustration shows some of the threats to ocean ecosystems (coral bleaching; changes in marine algae and fisheries) that may result as the ocean becomes more acidic. This process of “ocean acidification” is already occurring as carbon dioxide concentrations increase in the atmosphere and ocean. Addressing such impacts will require decision makers and scientists to work more closely than they have in the past. Image: David Fierstein © 2007 MBARI

MOSS LANDING, CA—The fate of the ocean is in our hands. The concentration of carbon dioxide in the Earth’s atmosphere is increasing rapidly due to human activities, and is already higher than it has been for hundreds of thousands of years. The ocean is absorbing much of this carbon dioxide, and is also showing some of the most dramatic impacts, in the form of ocean warming, sea-level rise, and increasing acidity. Marine life and marine ecosystems are already suffering from some of these changes. Sooner or later, one way or another, these changes will affect all of humanity.

Many marine scientists are well aware of these changes, and are concerned that critical scientific information is not reaching decision makers, who will need to respond rapidly to avert or mitigate looming environmental crises. To address this communication gap, The Monterey Bay Aquarium Research Institute, in partnership with the American Association for the Advancement of Science, NOAA’s National Marine Sanctuary Program, and the California Council on Science and Technology, will be hosting Ocean Science Summit 2008, a high-level conference on climate change and ocean health.

From May 27 through May 29, 2008, leading ocean scientists from across the country will sit down with legislators and staff from federal and state agencies, as well as other leaders in the marine community, to discuss what has been done, and what can be done to plan for and mitigate the changes that are occurring in the ocean. Scientists will summarize the latest findings on the state of the ocean. Decision makers will describe ongoing legislation that addresses ocean issues and climate change. Working together, they will make sure that timely and policy-relevant scientific research results reach the desks of those who need this information to make important decisions.

Attendance at Ocean Science Summit 2008 is by invitation only. However, members of the press are invited to attend the morning session on Wednesday, May 28. This session will include keynote speakers and panel discussions on recent achievements and innovations in ocean management, as well as in marine science and technology. Among the noted speakers at this morning session will be Senator Sheldon Whitehouse (RI), Congressman Sam Farr (CA), Vice Admiral Conrad Lautenbacher, Undersecretary of Commerce for Oceans and Atmosphere and NOAA Administrator, and John Hanke, Director of Google Earth & Maps.