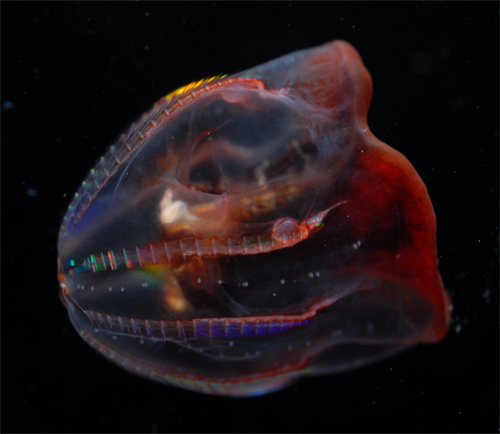 After sequencing the genome of Mnemiopsis leidyi, researchers in this study compared its genomic data to other ctenophore species including this comb jelly, Bathyctena chuni.

Comb jellies were included in Science News’ list of top genomes of 2013. Last year, MBARI Scientist Steven Haddock was an author on a paper that highlighted these fascinating and wondrous creatures. In this study, researchers compared the genomes of organisms, including that of Mnemiopsis leidyi, a comb jelly native to the coastal waters of the western Atlantic Ocean. They found striking evidence that comb jellies rather than sponges are the sister lineage to all other animals. This is fascinating news to biologists since comb jellies possess muscle and nerve cells while sponges do not. These findings prompt a new way of thinking about animal evolution. A Science News article provides more detailed information about this study.