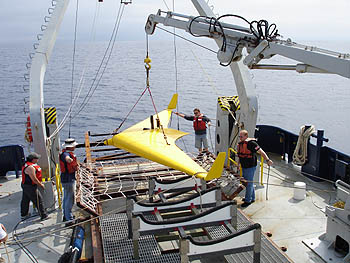 Like schools of robot fish, dozens of undersea gliders and other robotic undersea vehicles have been cruising the near-shore waters of the Central California coast during the past month. These undersea robots, along with other instruments carried on ships, airplanes, satellites, buoys, and drifters, are providing oceanographers with new ways of seeing and hearing the ocean in unprecedented detail.

All of these instruments, along with more than fifty scientists from over a dozen prestigious institutions throughout the country, are part of an extensive, ongoing research project known as “Monterey Bay 2006” (abbreviated “MB 06”). MB 06 runs from mid-July through mid-September 2006 and consists of four separate experiments that look at Central Coast waters from four different perspectives. Some experiments are trying to paint three-dimensional pictures of the ever-changing ocean currents by combining computer models with measurements of seawater temperature and chemistry. Other experiments are using sensitive underwater microphones to hear how sounds travel through turbulent coastal waters. All four of these complementary experiments are funded by the Office of Naval Research. 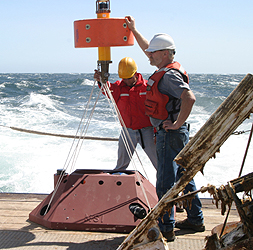 During the MB 06 experiment, data from almost 100 different oceanographic sensors are being fed to a central computer system hosted by the Monterey Bay Aquarium Research Institute. MBARI-designed software allows scientists involved in the experiments to study and discuss each other’s data via the internet. Thus, researchers can participate in the experiment while working on ships at sea or from their offices thousands of miles away. The general public can also look at data plots and read the scientists’ discussions, as the researchers decide on a day-by-day basis where to send their undersea robots to gather the most useful data.

The following paragraphs summarize the four experiments that make up MB 06:

Adaptive Sampling and Prediction (ASAP):
The goals of the ASAP experiment are:

1) To find out the most efficient ways of using autonomous ocean vehicles such as undersea gliders and to study ocean processes associated with the upwelling of cold, deep water along the Central California Coast;

2) To use the real-time data gathered by autonomous vehicles and other oceanographic instruments to improve computer models of ocean circulation; and

3) To refine these computer models so that they can reliably predict complex processes such as upwelling-related currents. In order to achieve these goals, ASAP researchers are using a technique called “adaptive sampling,” in which the paths of undersea vehicles are modified each day in order to get the most useful data. The scientists are also studying how fleets of vehicles can work together in “schools” to most efficiently gather data on large ocean areas that are constantly changing over time. The ASAP experiment builds on previous research performed during the 2003 Autonomous Ocean Sampling Network (AOSN) experiment. 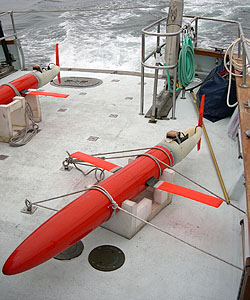 An undersea glider from the Scripps Institution of Oceanography is carried on board a research vessel out to the MB06 study area northwest of Monterey Bay. Image: (c) 2003 MBARI

Assessing the Effects of Submesoscale Ocean Parameterizations (AESOP):
The AESOP experiment complements the ASAP experiment by looking closely at some of the complex ocean processes that are not explicitly covered by existing computer models. For example, waters off the Central California coast are often affected by small-scale eddies, fronts (sharp boundaries between different water masses), and internal waves (waves that form underwater, between different ocean layers). The AESOP experiment attempts to determine how such localized ocean features and physical processes affect currents, mixing, and heat transfer in coastal waters.

Layered Organization in the Coastal Ocean (LOCO):
The LOCO experiment focuses on a recently-discovered biological phenomenon-dense populations of microscopic algae and other organisms that form distinct layers beneath the ocean surface. Such biological layers may be less than a meter thick, but can extend horizontally for dozens of kilometers. Scientists involved in this experiment are examining how these layers form, how they can be detected, how the organisms within these layers interact, and how the layers affect the movement of light and sound through the ocean waters.

Undersea Persistent Surveillance (UPS)
The UPS experiment involves monitoring central coast waters using extremely sensitive underwater microphones, electromagnetic sensors, and other oceanographic instruments. Some of these instruments have been placed temporarily on the seafloor; others are being carried by robotic vehicles such as gliders and autonomous underwater vehicles (AUVs). The instruments are being used as a system to monitor the ocean environment and to track some of the research vessels that will be traversing Central Coast waters during the MB 06 experiment. This will help researchers understand how ocean layers and currents affect the transmission of sounds and electrical and magnetic signals generated by ships (as well as by marine mammals and submarines).

Researchers from the US Naval Posgraduate School launch a surface float that transfers data from undersea instruments to shore via radio.

Researchers from the Naval Postgraduate School prepare to lower a current meter onto the seafloor off Monterey Bay as part of the ASAP experiment.

Researchers from Alaskan Native Technologies launch an undersea glider equipped with sensitive underwater microphones as part of the PLUSNet experiment. 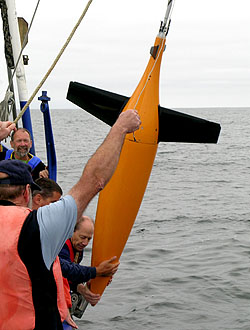 Researchers from Alaskan Native Technologies launch a seaglider to listen for sounds in the ocean. 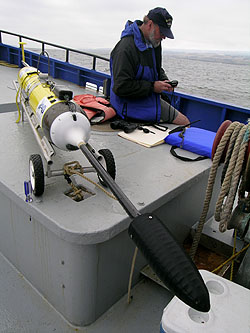 Researcher Skip Denny from Alaska Native Technologies monitors an ongoing PLUSNet exercise. The undersea glider in the foreground is fitted with a sensitive underwater microphone (on the tip of the pole).

An undersea glider from the Scripps Institution of Oceanography is carried on board a research vessel out to the MB06 study area northwest of Monterey Bay. 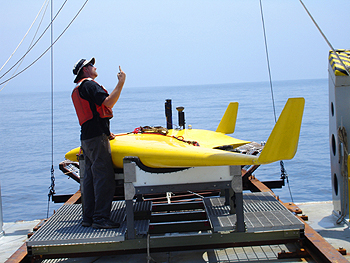 The XRay glider, a newly designed, high-performance undersea robotic vehicle, is readied for a trial run as part of the PLUSNet experiment. This new glider was created by the Marine Physical Lab at Scripps Institution of Oceanography and the Applied Physics Lab at the University of Washington.