MBARI researchers will journey to the middle of the North Atlantic Ocean to the Sargasso Sea. This unique ocean habitat is named for the free-floating brown algae Sargassum (also called “gulf weed”) and their associated community of plankton, invertebrates, and fish, many of which are found only there. For Chief Scientist Ken Smith, this is an opportunity to compare studies of the Sargassum community that he conducted more than 30 years ago. 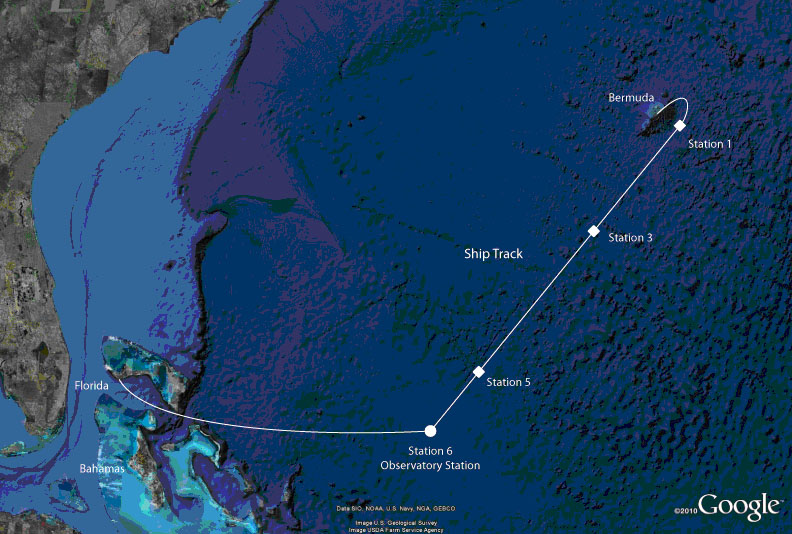 The mission will be the second voyage for the Schmidt Ocean Institute’s ship, Lone Ranger, a former ocean tug that has been retrofitted for cutting-edge science investigations.

Smith and collaborators will conduct four complementary research projects during a transit from Bermuda to a deep-water site east of the Bahamas:

Pelagic Sargassum communities as indicators of surface ocean warming and increasing acidity
MBARI’s Ken Smith studied the Sargassum community of plankton, seaweeds, and animals more than 30 years ago, before the impact of global warming was identified in the surface ocean. He returns to the Sargasso Sea in this expedition to observe how the community has been altered by warmer surface waters and increased acidity. Smith’s team will collect samples within Sargassum patches on the transit from southeastern Bermuda to the Bahamas. While at sea, Smith will receive updated satellite images of the area from John Ryan at MBARI and consult with him and colleagues to hone in on sites with large seaweed aggregations. His team will collect samples to measure species composition (who is there?), species abundance (how many of each kind?), and biomass (volume of living material). In addition, the team will deploy a robotic vehicle to record video under the mat of Sargassum and make water quality measurements such as temperature and salinity.

Genetic connectivity of fauna associated with pelagic Sargassum
Sargassum patches are similar to islands in their apparent physical isolation from each other. It is currently unknown whether the animal communities that associate with floating Sargassum are a connected population or several small, isolated populations. Schmidt Ocean Institute postdoctoral fellow Dan Barshis and his team will use genetic techniques to reveal these relationships. Samples will be collected during the expediton and brought back to Barshis at Hopkins Marine Station for genetic analysis.

Biodiversity of large mobile scavengers at abyssal depths
University of Hawaii’s Jeff Drazen and his team are interested in deep-sea fish and other large, mobile scavengers that live on the abyssal seafloor 3,000 to 6,000 meters deep. These creatures have evolved complex sensory capabilities that allow them to detect food falls from sunlit surface waters, such as clumps of seaweed. To determine what species are found in the Sargasso Sea, Drazen’s team will deploy and recover a baited camera system for a 24-hour sampling period at each station.

Climate, carbon cycling and deep-ocean ecosystems
In the final part of the expedition, Ken Smith and Alana Sherman will deploy a benthic observatory at a 5,400-meter-deep site where it will remain for at least six months. The system has sediment traps to collect sinking particulate matter through the water and a time-lapse camera system to record observations of the seafloor. This Sargasso Sea station gives the researchers a contrasting ocean basin with which to compare data from a similar observatory that they have maintained in the Pacific Ocean for more than 20 years. Data from the Pacific observatory at“Station M” have revealed changes over time in the amount of food reaching the deep sea. This variation in food has been related to changes in climate and surface ocean conditions.

MBARI’s research vessel Western Flyer and remotely operated vehicle Doc Ricketts are on a seven-week expedition to the waters off the coasts of Oregon and Washington. A multidisciplinary group of MBARI scientists and collaborators will explore and conduct research experiments on gas hydrates, the behavior of carbon dioxide in the deep sea, underwater volcanoes, and deep-sea animals.