In addition to scientific research, an important part of MBARI’s mission is to develop new cutting-edge research tools for the oceanographic community. One such tool is the “OsmoSampler,” developed by MBARI research specialist Hans Jannasch. This versatile instrument can collect water samples continuously over periods ranging from months to years. It is particularly useful in environments where scientists want long-term data or must leave their instruments in place for long periods of time.

In September 2004, Jannasch helped recover several OsmoSamplers that had been collecting fluids from bore holes hundreds of meters beneath the seafloor since 2002. These OsmoSamplers had been installed off the coast of Costa Rica as part of the Integrated Ocean Drilling Program (IODP). An international team of geologists and geochemists are studying this area, where seafloor sediments and oceanic crust are slowly being forced underneath the over-riding continental crust of Central America, causing earthquakes and raising volcanic mountain ranges. 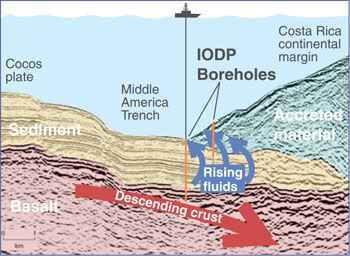 Cross section of the Costa Rica Subduction Zone (not to scale) showing the location of the IODP boreholes where pore waters were sampled. Image: (c) 2004 MBARI

As oceanic crust and sediments descend within the Costa Rica Subduction Zone, they are heated and squeezed, forcing out fluids that eventually migrate back up toward the seafloor. By studying the temperature, pressure, composition, and flow rates of these fluids, scientists hope to discover what conditions exist deep in the crust, beyond the reach of their drilling rigs. This information will help them understand how the area’s earthquakes and volcanoes are generated.

For two years Jannasch and the other scientists had been looking forward to retrieving their instruments, which they hoped were steadily collecting samples of pore fluids. Originally, the instruments were supposed to be recovered in March 2004 by the manned submersible Alvin. Unfortunately, Alvin was unable recover the OsmoSamplers from one of the boreholes, so the scientists returned to the site on the drill ship JOIDES Resolution, which could both fish out the old OsmoSampler arrays and deploy new ones. 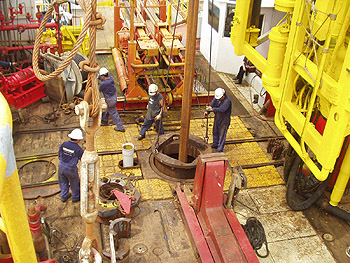 Technicians working with the “drill string” are dwarfed by heavy machinery on the deck of the IODP vessel JOIDES Resolution. The vertical pipe in the middle of the photo is one of many 30-meter pipe segments that must be screwed together as the drill string is lowered down to the sea bottom, more than four kilometers beneath the ship. Photo: Hans Jannash (c) 2004 MBARI

Arriving on site, the JOIDES Resolution attempted to retrieve the OsmoSamplers by lowering what was essentially a large grappling hook at the end of a 4,400-meter-long drilling pipe. After successfully hooking onto a small line attached to the OsmoSampler array, the ship’s crew spent nine hours hauling the pipe and the array back up to the surface. But when the instruments were within 200 meters of the surface, the line parted and the OsmoSamplers sank back down to the sea bottom.

Frustrated but not defeated, the scientists moved over to their second borehole, about one kilometer away. There they successfully retrieved their equipment, and deployed new OsmoSamplers. After this success, they returned to their original site. Using a camera sled attached to the drill string, along with a smaller grappling hook, they were eventually able to find and recover the missing OsmoSampler array.

The OsmoSampler arrays used in this experiment consisted of eight to thirteen separate OsmoSamplers strung together on five- to ten-meter-long metal rods. Each individual OsmoSampler contained about 300 meters (1,000 feet) of thin teflon or copper tubing. During the instruments’ 2-year deployment in the seafloor, pore fluids were sucked slowly but continuously into this tubing by osmotic pumps (see below for a brief description of this process). 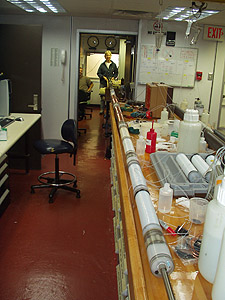 A newly assembled OsmoSampler array awaiting deployment 500 meters below the seafloor. This 7.6-meter-long array contains about 2,500 meters (8,000 feet) of coiled teflon and copper tubing. Before deployment, it will be inserted into a protective metal sleeve, then lowered to the sea bottom and into the borehole through the center of a 10-cm (4-inch) drill pipe. Photo: Hans Jannash (c) 2004 MBARI

After the OsmoSamplers were recovered from the boreholes, researchers cut the tubing into four-meter segments, each of which contained fluid that had been collected over a period of about one week. Fluid samples from each segment of tubing were carefully expelled into vials and sealed to preserve the fluids and gasses inside. These vials were distributed among the various scientists, who took them back to their laboratories to measure various chemical and physical properties of the fluids.

nalyzing more than 100 weekly pore water samples taken over a two-year period could take months or even years. Nonetheless, Jannasch is excited about getting to see the results of the team’s work. As he puts it, “We got some great samples—now we’ll just have to see what stories they can tell us… By the time we’re done, we should have a much better idea of which elements in the pore waters go down into the lithosphere, and which are ejected back into the ocean.” 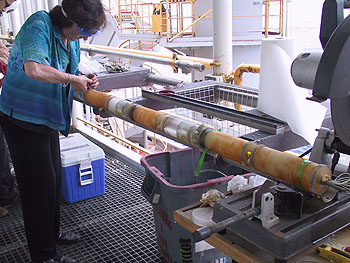 A chemical oceanographer by training, Jannasch relishes his role as both scientist and inventor of instruments such as the OsmoSampler. He describes OsmoSamplers as “ultimately simple instruments, because they require no software, no batteries, and no moving parts.”

OsmoSamplers collect water and gas samples by sucking the fluids into very long, small-diameter tubes attached to osmotic pumps. Osmotic pumps operate on the principle that if two fluids of different salinities are separated by a semi-permeable membrane, fluid will diffuse through the membrane toward the side of higher salinity. Inside each OsmoSampler, a special chamber supplies a long-term supply of salt and saturated brine on one side of such a membrane. Fluids are drawn into a fresh-water chamber on the other side of the membrane, which is connected to several kilometers of sample tubing. As long as there is a difference in salinity across the membrane, fluids will be drawn across the membrane and sucked into the sample tubing.

After several years, the entire length of sample tubing becomes filled with sampled fluid and the OsmoSampler must be recovered. After the tubing is recovered, it is cut in short segments, each of which contains fluid collected during a known period of time. The fluids from each segment can be analyzed in a laboratory to obtain a time series that shows changes in the fluid’s chemical or physical properties.

As part of the Costa Rica experiment, Jannasch also tested a new invention that he calls an “OsmoFlowmeter,” which uses four Osmosamplers sampling fluids from four different directions around a central tracer injection port. Jannasch hopes that this device will allow scientists to measure the direction and rate at which pore fluids are moving past a borehole.

Key researchers in the Costa Rica Subduction Zone project include: