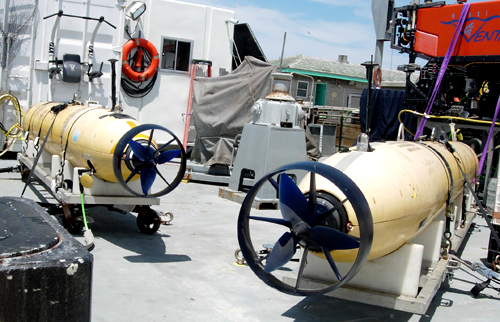 The Gulper AUV (left) and the mapping AUV (right) are secured aboard the Rachel Carson. This is the first time the Carson has had both AUVs and the ROV Ventana on the back deck.

On Monday, the R/V Rachel Carson departed for a 32-day expedition in the Pacific Northwest. The trip is comprised of four legs with two port stops based out of Newport, Oregon.

During the first leg, water samples will be collected for Senior Scientist Bob Vrijenhoek near Bodega Head, off the coast of northern California. His research group is using the Gulper autonomous underwater vehicle (AUV) to sample chlorophyll in the subsurface ocean. An abundance of chlorophyll indicates high concentrations of phytoplankton.

The last three legs of the expedition will consist of seafloor surveys for Senior Scientist Dave Clague. His research group will conduct surveys along the volcanic spreading centers of the Gorda Ridge and the Juan de Fuca Ridge. They will use the mapping AUV to survey numerous sites. Remotely operated vehicle Ventana will also be deployed to conduct low-altitude surveys with a new ocean-imaging system developed at MBARI. The Rachel Carson will return to Monterey Bay on August 28.