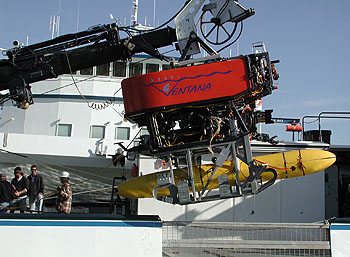 This photograph shows the yellow, torpedo-like AUV attached to the underside of ROV Ventana. The vehicles are being lowered into the water in Moss Landing Harbor so that the ROV pilots can determine how much weight to add to or remove in order to make the ROV neutrally buoyant. Image: Todd Walsh (c) 2004 MBARI

In an unusual test arrangement, MBARI’s remotely operated vehicle Ventana has been carrying an autonomous underwater vehicle (AUV) during a series of recent dives in Monterey Canyon. These dives are designed to test a new multibeam sonar mounted inside the AUV. Multibeam sonar is used to create very precise depth maps of the seafloor.

By hooking the sonar up to Ventana’s power and data network, MBARI engineers can test and adjust the sonar interactively during a dive. Such interaction is not possible when the AUV is deployed alone because the AUV is programmed at the surface and the engineers have no way of communicating with it once it is underwater.

This “piggy-back” arrangement also lets researchers run the sonar within about 10 meters of the sea bottom, in order to create very detailed sea-bottom maps. The AUV alone cannot be used for such close work because it might collide with the steep canyon walls.

In addition to serving as an engineering test, these dives will provide extremely high resolution maps of one or more sites along the floor of Monterey Canyon. MBARI researchers hope to use this same ROV/AUV configuration in the future to map these same sites repeatedly, looking for signs of sediment movement. This work is part of MBARI’s Canyon Dynamics project, which aims to understand how much and how frequently sediment moves down Monterey Canyon.

Eventually this AUV will be equipped with three different instruments for mapping the seafloor: 1) A multibeam sonar, for precise depth measurements; 2) A side-scan sonar, for making visual maps of seafloor characteristics such as rock types; and 3) A sub-bottom profiler, which can show layers of sediment and rock up to several hundred meters below the seafloor. 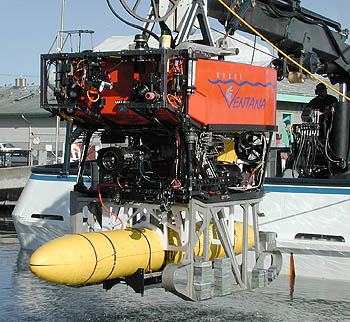 This close-up view shows the special mounting harness and sled that attaches the AUV to ROV Ventana. The gray sled beneath the ROV normally holds a large spool of fiber-optic cable, and is used to lay this cable along the sea floor as part of MBARI’s Ocean Observatory efforts. Image: Todd Walsh (c) 2004 MBARI