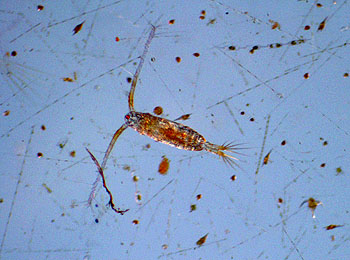 This copepod from Monterey Bay is less than one millimeter (1/32 inch) long. The hair-like objects in the background are strands of diatoms, a type of microscopic algae. Image: Julio Harvey © 2010 MBARI

Tiny animals called zooplankton swarm like insects in the coastal waters of the ocean. They provide dinner for a host of larger animals, ranging from fish to whales. But these microscopic organisms also challenge the scientists who study them because they are constantly drifting with the movement of ocean currents. Their ephemeral communities continually grow and die out as ocean conditions change, or as other animals eat them, making it hard to quantify their presence or pinpoint their location.

Scientists at MBARI employed a pair of high-tech robots to detect these elusive, minute creatures. This floating menagerie includes the larvae of many common tide-pool animals, as well as tiny bug-like animals called copepods.

The scientists deployed a swimming robot to collect zooplankton at specific locations, and an anchored robotic laboratory to identify the presence of certain species or groups in near-real time. With the resulting data, the researchers captured a new and extremely detailed picture of how zooplankton respond to changing environmental conditions in Monterey Bay. The researchers’ findings appeared in a recent issue of the Journal of Experimental Marine Biology and Ecology.

The scientists found something they had suspected, but had never precisely measured before. They detected dense concentrations of zooplankton along upwelling fronts, where cold, dense water from the depths comes in contact with warmer surface waters near shore.

“Traditionally, we picture a dense phytoplankton [microscopic algae] bloom near the surface, full of grazing copepods. Yet we’ve detected large numbers of copepods that appear to be feeding at the interface between the bloom and plumes of upwelled water,” said MBARI molecular ecologist Julio Harvey. “The copepods are at edges of the bloom, not just inside it.” Such fine-scale information about where and when zooplankton are abundant helps researchers better understand ocean food webs, and may one day improve fisheries management.

MBARI’s researchers conducted their work using two robots that can accurately measure two key attributes of zooplankton communities: their constantly shifting physical locations, and changes in their abundance over time. According to Harvey, although many zooplankton can swim, they also drift in ocean currents like dust in a desert wind. Currents can help gather tiny plankton into dense clouds that may persist for hours or days, move with the flowing water, and then dissipate. Traditional oceanographic methods for sampling plankton, such as towing nets or sampling with bottles from a ship, often miss the fine-scale details of where plankton occur, as well as the physical or chemical characteristics of the water immediately surrounding them. 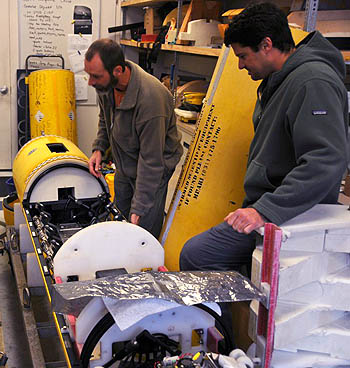 To sample moving patches of plankton, the researchers dispatched an autonomous underwater vehicle, or AUV. This “Dorado-class” AUV is about four meters (14 feet) long and looks like a yellow torpedo. Scientists can program this robot to cruise to specific depths and locations and collect water samples without a pilot. The AUV carries a set of giant syringes, each of which can “gulp” 1.8 liters of seawater, about the volume of a large soda bottle, in less than two seconds. The AUV also records important environmental data continuously as it moves through the water. Thus, for each water sample, the researchers know the temperature, salinity, water clarity, and the concentrations of nitrogen, oxygen, and chlorophyll in the surrounding seawater.

In the spring and summer of 2009, MBARI scientists deployed the AUV nine times, gulping up water in a variety of locations around Monterey Bay. During each trip, the AUV collected up to 10 water samples, which the researchers brought back to the lab. Scientists identified the zooplankton in each sample using microscopes and DNA analysis.

While the AUV was cruising around the bay collecting water samples, the team also deployed a robotic laboratory called the Environmental Sample Processor (ESP). The ESP is a microbiology “lab in a can” that “sips” up to four liters of water over a 30- to 60- minute period, and then automatically runs genetic analyses to detect and quantify organisms in the water. The ESP also records environmental data. 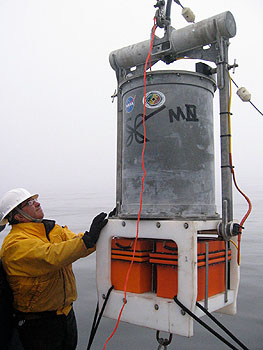 MBARI researcher Roman Marin inspects the pressure housing for the Environmental Sample Processor before lowering it into the waters of Monterey Bay. Image: Julio Harvey © 2009 MBARI

The ESP autonomously performs analyses similar to those scientists use in the lab to identify the presence of plankton based on their genetic material. The method employs genetic probes—strands of DNA that function like highly specific Velcro. The probes are arranged as tiny dots on a flat surface called a “microarray.”

After collecting a water sample, the ESP adds detergents that break down any cells in the water to release their genetic material. If an animal of interest, or “target,” is in the sample, its genetic material (RNA) will bind to a corresponding probe on the microarray. The ESP then adds a signal probe, which latches on to the snared RNA. Finally, the ESP adds an enzyme that causes the signal probe to glow, letting the scientists know that their target organism is present.

In order to detect a specific organism of interest in the plankton, the scientists first need to design a probe that matches its genetic material. For the 2009 study, they used previously developed probes to detect the larvae of barnacles, mussels, polychaete worms, and green crabs (an invasive species in Monterey Bay). Harvey also designed three new probes for copepods, animals that look like grains of rice with two long antennae, which are dominant players in the Monterey Bay zooplankton scene. Harvey and his fellow researchers found that, compared to other organisms, the concentrations of calanoid copepods they encountered were “off the charts.”

At the front lines

The researchers used their AUV and ESP sample results to compare changes in zooplankton abundance with changes in environmental conditions, creating a dynamic picture of the plankton in Monterey Bay. They found high zooplankton diversity and abundance in warm water near shore, where there was also lots of chlorophyll and low concentrations of the nutrients that phytoplankton need to grow—suggesting that a phytoplankton bloom had used up the nutrients in this region. Waters farther offshore were essentially bare of zooplankton, and tended to be cold, with low chlorophyll and lots of nutrients—typical of recently upwelled water.

Although these results were expected—finding zooplankton in high chlorophyll concentrations is like finding cows grazing on grass—another interesting pattern emerged for the calanoid copepods that dominated the zooplankton. Copepod populations were highest in boundaries between water types, which were cold and saline like deep, upwelled water, but also low in nitrogen and high in chlorophyll like surface waters. 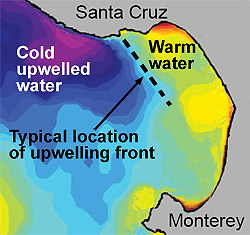 This map shows one area where upwelling fronts are likely to occur in Monterey Bay. Fronts often form at the boundaries between areas of cold, upwelled water (blue and purple) and warmer water inside the bay (yellow and red). Image: © 2012 MBARI

Researchers have long known that oceanographic fronts, where two water types come together, are productive areas, because whales, seabirds, and other animals flock to them to feed. “Fronts are really where the action is,” Harvey said. What is less certain is why the zooplankton aggregate along these fronts. Does the difference in water density form a barrier that traps plankton like a screen? Or do the swimming copepods flock to these phytoplankton-rich zones to feast? Harvey thinks the answer is probably a little bit of both.

Since the 2009 study, Harvey and many other researchers have expanded on this work as part of the Controlled, Agile, and Novel Observing Network (CANON) project, a collaboration between MBARI scientists and other institutions to study the relationships between ocean conditions and many different groups of marine organisms. “It’s an unprecedented snapshot look at what’s happening in the surface waters of the marine environment,” Harvey said. “This [2009] study serves as a launching point for several of our planned, future studies.” Building on their previous work, Harvey said the team deliberately set out to sample upwelling fronts in 2011.

In recent years, MBARI researchers have learned how to program the AUV to detect the thin layers of phytoplankton that make up blooms, and automatically collect samples when it encounters them. “We can now use these sensors to observe all kinds of oceanographic processes or features that can change on an hourly basis,” Harvey said, citing examples like upwelling fronts, algal blooms, and patches of high ammonia concentration below the water’s surface. “Key questions we are answering are: why are they there, how do they function, and how do they influence biology?”

Harvey hopes the precision and flexibility of robotic technology will give scientists a big-picture look at the environment, and one day be useful in fisheries management. Zooplankton are crucial fish food, both for the juveniles of species like rockfish and halibut and for the adults of species like anchovies and sardines. A poor plankton year means poor eating for small fish, which may translate into a bad fishing season a few years down the line when those fish grow to a catchable size. Therefore, a better understanding of zooplankton abundance could help fisheries managers set more sustainable fishing quotas.

Harvey also emphasizes the importance of studying the environment over a diversity of scales, from the microscopic level to the entire Monterey Bay region. “I’m working at one end of the spectrum,” Harvey said of his molecular research. “I want to match up our molecular signals with satellite imagery and other data from every scale in between.” Such advances in technology and collaborations across disciplines are bringing scientists one step closer to detecting and forecasting changes in ocean health.

Sept 21, 2020 – Researchers from MBARI and the USGS recently published a paper showing how MBARI’s environmental sample processors can be used to monitor the health of rivers.
July 30, 2020 – MBARI's Summer 2020 CANON experiment shows how robots can collect samples and data at sea even during the COVID-19 pandemic.
March 31, 2020 – Researchers are using an Environmental Sample Processor to detect endangered Bryde's whales in the Gulf of Mexico.
Researcher