Return to the USS Macon 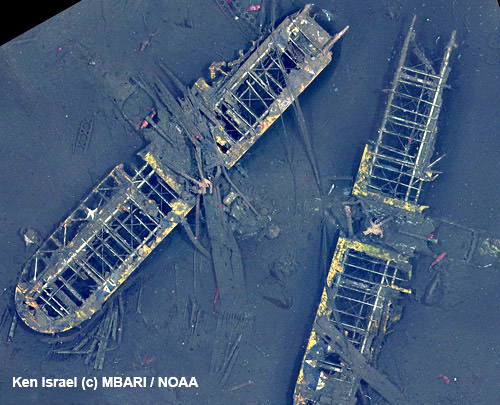 This newly created photomontage shows wreckage of two of the Sparrowhawk biplanes amidst the wreckage of the USS Macon. The image was created by Ken Israel of Integral Consulting, using still images taken by MBARI’s remotely operated vehicle Tiburon in 2006.

On August 18, researchers on board the research vessel Nautilus used the ROVs Hercules and Argus to dive on the wreck of the USS Macon, a rigid-frame dirigible airship that crashed off the Big Sur coast in 1935. MBARI researchers helped discover this wreck in 1990 and led a 2006 expedition that mapped much of the wreckage, including several Sparrowhawk biplanes that were carried inside the hull of the airship. Researchers hope to compare detailed maps made during the current expedition with those created in 2006 to study how seawater is affecting the duraluminum frame of the airship.