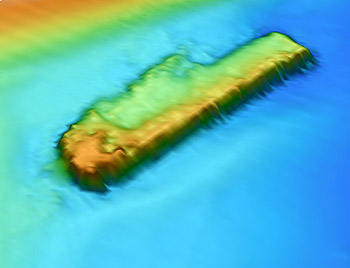 During a recent expedition to map earthquake faults in Monterey Bay, MBARI researchers discovered the wreck of a barge on the muddy seafloor in Monterey Canyon. The barge Umpqua II was about 1,700 meters (one mile) below the ocean surface.

Researchers first spotted the barge in sonar data from MBARI’s autonomous underwater vehicle (AUV) D. Allan B., which is specially designed to map the seafloor. Cruising as low as 50 meters above the seafloor, the AUV can detect objects just a few centimeters across. This has allowed MBARI geologists to discover many new geological features, including two hydrothermal vent areas in the Gulf of California. The AUV has also proven useful in mapping wrecks such as the Montebello, an oil tanker that sank off Central California during World War II.

In this latest discovery, the research team did not set out to find shipwrecks. Led by MBARI geologist Charlie Paull, they were on a week-long research cruise to study the San Gregorio Fault, an active earthquake fault that crosses Monterey Bay. As a first step in their research, the geologists used MBARI’s mapping AUV to create detailed maps of the seafloor in the area where they believed that the fault crossed Monterey Canyon. 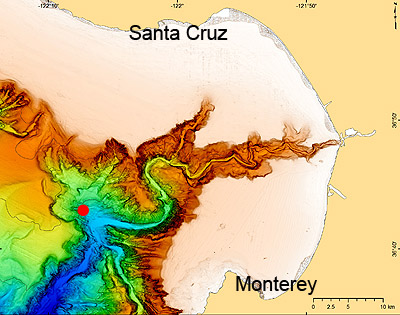 The red dot indicates the location of the wreck of the Umpqua II barge in this bathymetric map of Monterey Bay. Image: (c) 2014 MBARI.

Katie Maier, a geologist with the U.S. Geological Survey, was examining sonar images from the AUV when she noticed a strange, rectangular object on the floor of Monterey Canyon. A closer look at the sonar data suggested that the object was man made.

After the seafloor maps were completed, the research team used MBARI’s remotely operated vehicle (ROV) Doc Ricketts to dive down into Monterey Canyon and examine the seafloor for traces of the fault. Curious about what they had seen on the sonar maps, the researchers began one dive by sending the ROV down to take a close look at the object.

As the ROV approached the mysterious object, the entire science team gathered in the ROV control room to watch the video from the ROV. One of the first things they saw was the stern of the wrecked vessel, where its name, Umpqua II, and its home port of Reedsport, Oregon, were clearly visible.

A quick search on the internet showed that this barge had been built in 1960, and was used primarily to carry dredge spoils. According to the web site “wrecksite.eu” the barge ran ground near Moss Landing in 1982 and was subsequently towed offshore and intentionally sunk in Monterey Canyon. (This would probably not be allowed today, since the wreck site is within the Monterey Bay National Marine Sanctuary). 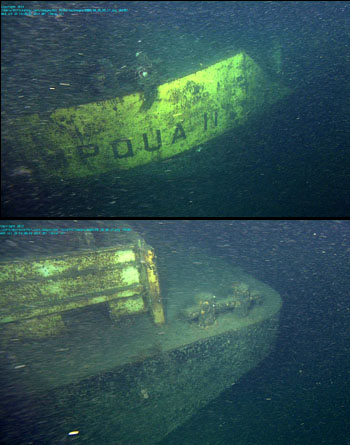 These images show two views of the wrecked barge Umpqua II, almost 1,700 meters below the surface of Monterey Bay. Although visibility in the canyon was rather poor, the name of the vessel was clearly visible. Images: (c) 2014 MBARI.

The researchers flew the ROV around the wreck several times, shooting video to document the condition of the vessel. Aside from a little rust, and damage that probably occurred during the grounding or sinking, the barge was in surprisingly good shape. It had been colonized by a few sea stars, anemones, and fish, but was not heavily overgrown with marine life. The researchers speculate that low oxygen concentrations in this deep part of the canyon could have slowed down both the decomposition of the metal barge and its colonization by marine life.

Although MBARI has no immediate plans to return to the sunken barge, the wreck may prove useful to researchers studying the long-term effects of the deep sea on man-made objects, as well as the effects of these objects on the marine environment. Since 2004, MBARI has been collaborating with researchers at the Monterey Bay National Sanctuary to study the slow decomposition and environmental effects of a sunken shipping container that ended up on the seafloor of Monterey Bay. The shipping container is in slightly shallower water only a few miles away from the wreck of theUmpqua II, and has been submerged about one third as long. Thus, researchers may be interested in comparing the two sites.

Even though MBARI researchers have been diving in Monterey Canyon since 1989, this discovery reminds us how little of the deep seafloor we have actually observed first hand. As MBARI develops more research tools such as the mapping AUV, additional discoveries are bound to come.

The MBARI mapping AUV is a torpedo-shaped vehicle equipped with four sonars that operate simultaneously during a mission to map the seafloor autonomously. The sonars are a swath multibeam sonar, two sidescan sonars, and a sub-bottom profiler.