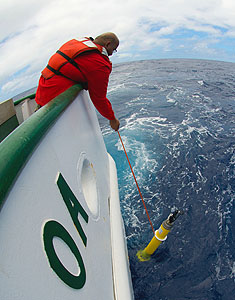 A researcher prepares to release the Apex float with its integrated ISUS nitrate sensor into the clear, mid-ocean waters northeast of Oahu. Image: © 2007 Paul Lethaby/SOEST

For almost three decades, oceanographers have been puzzled by the ability of microscopic algae to grow in mid-ocean areas where there is very little nitrate, an essential algal nutrient. In this week’s issue of Nature, MBARI chemical oceanographer Ken Johnson, along with coauthors Stephen Riser at the University of Washington and David Karl at the University of Hawaii, show that mid-ocean algae obtain nitrate from deep water, as much as 250 meters below the surface. This finding will help scientists predict how open-ocean ecosystems could respond to global warming.

The sea around Hawaii may be clear and blue, but it hides an enduring oceanographic mystery. Surface waters in this and other mid-ocean areas contain almost no nitrate or other plant nutrients. Yet each year, microscopic algae (phytoplankton) flourish in these vast, open-ocean areas. Although miniscule in size, these mid-ocean algae consume about one fifth of all the carbon dioxide taken up by plants and algae worldwide.

To solve this mystery, Johnson and his fellow researchers used a robotic drifter called an Apex float, which automatically moves from the sea surface down to 1,000 meters and then back again, collecting data as it goes. Researchers at the University of Washington outfitted this drifter with an oxygen sensor and a custom version of Johnson’s In Situ Ultraviolet Spectrophotometer (ISUS), which measures nitrate concentrations in seawater.

The design and deployment of this custom drifter was funded by grants from the National Science Foundation, the Office of Naval Research, the National Oceanic and Atmospheric Administration, the Gordon and Betty Moore Foundation, and the David and Lucile Packard Foundation.

In December 2007, researchers from University of Hawaii placed the drifter in the ocean northeast of Oahu, where it collected ocean profiles once every five days for almost two years. 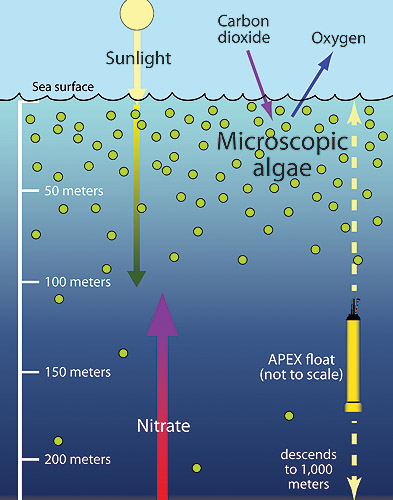 This illustration shows how microscopic algae live mostly in the sunlit waters close to the sea surface, while their essential nutrient, nitrate, is only available in deeper waters. Johnson and his coauthors showed that, each year, as the algae grow over the course of a year, concentrations of oxygen increase in surface waters while concentrations of nitrate decrease in deeper water. As yet unclear is how algae near the surface obtain nitrate from the depths. Image: Kim Fulton-Bennett © 2010 MBARI

From January through October of each year, the instruments on the drifter showed a gradual increase in oxygen concentrations in the upper 100 meters of the ocean. At the same time, the float detected a gradual decrease in concentrations of nitrate in deeper waters, from 100 to 250 meters below the surface.

Johnson and his coauthors found that the amount of oxygen being produced near the surface through photosynthesis was directly proportional to the amount of nitrate that was being consumed in deeper water.

Based on the decline in nitrate concentrations at depth, the researchers estimated how much algal growth could have taken place during the year. They found that their estimates of algal growth were very similar to algal growth rates measured during the University of Hawaii’s oceanographic cruises in that part of the Pacific.

Because there is not enough sunlight for algae to grow below 100 meters, the researchers conclude that algae growing near the surface somehow obtain nitrate from deeper water, and use this nitrate to grow and reproduce. But exactly how the algae obtain these deep nutrients is still unclear.

One possible mechanism is ocean eddies. Satellite and drifter data suggest that slow, swirling eddies occasionally form hundreds of meters below the surface of the Pacific. The ISUS data demonstrate that some of these eddies can carry nitrate up to about 70 meters below the ocean surface. Yet these pulses of nitrate do not appear to reach the upper 50 meters of the water column, where most of the algae grow. 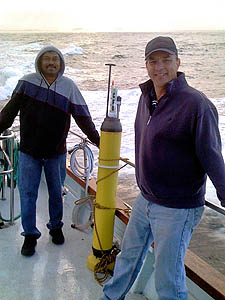 Johnson and his coauthors speculate that dormant microalgae may inhabit the waters below 100 meters. Open-ocean eddies occasionally carry these algae upward, to depths of perhaps 70 meters. At this point, the algae may consume any available nitrate and then migrate farther up into the sunlit surface waters.

Johnson suggests that testing this hypothesis will provide an interesting challenge for marine biologists. Scientists already know that some algae can swim, using tiny, whip-like flagella. Other algae can actively change their buoyancy, just like the Apex float, and either sink or float upwards.

Such studies of tiny algae in the open ocean may seem remote from human activities on land. Yet the oxygen produced by mid-ocean algae is essential for the survival of life on earth. Furthermore, these algae move huge amounts of carbon dioxide from the atmosphere into the ocean, and thus play a significant role in controlling the earth’s climate. As Johnson says, “The bugs you can’t see with a microscope are doing all the work.”