MOSS LANDING, California—Microscopic bacteria in the world’s oceans have only recently been detectable, but new studies are revealing surprising evidence of their importance.

Microbiologists from the Monterey Bay Aquarium Research Institute (MBARI) report in the 15 September 2000 issue of the journal Science their discovery of a novel light-absorbing pigment found in oceanic bacteria. The MBARI researchers describe how this new photopigment can generate cellular energy using light. Their discovery suggests that a whole new class of microorganisms is capable of harnessing light energy in the ocean’s sunlit surface zone. 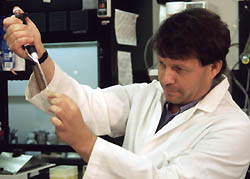 “We’ve uniquely applied new advances in genomic technology to our studies of oceanic microbes and it has lead us to unexpected results,” said lead researcher Ed DeLong. “We now have the techniques to address some important ecological questions about the role of these microorganisms in the ocean.”

Microbiologists who study oceanic picoplankton—microscopic bacteria that are 0.2 to 2 micrometers in diameter—face the challenge of studying microorganisms that cannot be readily grown in culture. Using new techniques, biologists have started to identify prominent groups of microbes in the ocean, allowing them to map their distribution and abundance. But the function of those microbes in their environment has remained unknown. DeLong and postdoctoral associate Oded Béjà have devised methods to dissect the genomes of the uncultivated microbes, allowing them to identify the functions of specific genes, and predict their ecological significance. 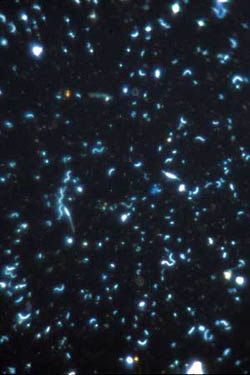 In this recent study, samples of oceanic bacteria were collected in Monterey Bay. The MBARI researchers isolated large genome fragments and, with colleagues at Amersham Pharmacia Biotech (Sunnyvale, CA), produced the raw gene sequences from the picoplankton DNA. The sequences were assembled and analyzed at MBARI to reveal the encoded genes and their hypothetical function. The oceanic microbial genome sequence revealed a new rhodopsin-like pigment never before found in any bacterial species. (Rhodopsins are light-absorbing pigments, more familiarly associated with vision in the animal kingdom.) The bacterial sequence suggested that this new photopigment might serve as a type of light-driven ion pump, enabling the oceanic microbes to generate energy from sunlight.

MBARI researchers used recombinant DNA technology to express and test the function of the rhodopsin-like gene. As predicted, when exposed to light, the photopigment moved ions across the cell membrane, showing that it can generate energy by absorbing light. Additional bioinformatics analysis and biophysical experiments necessary for this study were conducted by researchers from the National Center for Biotechnology Information (National Institutes of Health) and the University of Texas Medical School.

DeLong and his colleagues are excited by the many implications of this research, especially the demonstrated effectiveness of using genomics for characterizing naturally-occurring microbes. Their research suggests that rhodopsin-like photopigments appear to be more taxonomically widespread than previously thought and reveals a new type of light-driven energy generation in an abundant oceanic microbial group. For nanotechnology development, this research has generated interest in the potential for new applications in the area of light-actuated molecular switches. 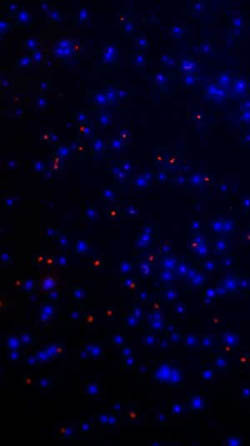 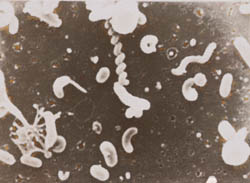 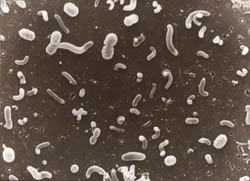 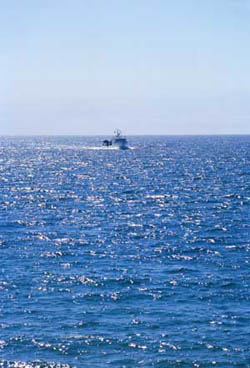 An underway seawater system on MBARI’s research vessel Point Lobos was used to collect the surface samples for this study. 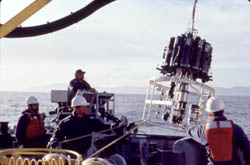 Special bottles mounted on a CTD rosette can be deployed from a ship to collect seawater samples from which oceanic bacteria can be extracted. Photo: Tim Pennington (c) 1998 MBARI 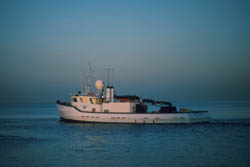