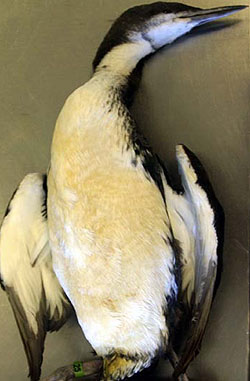 This loon was one of the many seabirds that washed up on the beaches of Monterey Bay in November 2007. Photo by Melissa Miller (California Department of Fish and Game)

A February 23 paper in the Public Library of Science (PLoS ONE) describes how researchers from four different organizations combined their expertise to figure out why over 200 seabirds died in Monterey Bay during November 2007. Their group effort demonstrated that a late-season red-tide bloom coincided with the arrival of thousands of tired, hungry, migrating birds in the bay. The red-tide was caused by a dinoflagellate, Akashiwo sanguinea, that released a soap-like substance into the water. This substance removed the waterproofing from the birds’ feathers, causing many of them to die from hypothermia.

The authors on this paper included specialists in red tides, seabirds, animal medicine, water pollution, ocean monitoring, and ocean currents. Some of these researchers, such as MBARI oceanographer John Ryan, were already performing field work in the bay when the die-off occurred. Like detectives piecing together clues, they gathered information not just on the birds, but also on algae, currents, winds, and waves in the bay. For example, Ryan’s analysis of satellite images was combined with California Fish and Game statistics on bird strandings. As Ryan says, “We saw a distinct progression over time, both in the satellite imagery showing the red tides and in the bird strandings. Both moved from the north to the south side of the bay over a two-week period.” He adds, “This was a new form of harm from a red tide, which we’d never seen before.”