MBARI oceanographers spent a week at sea this summer studying the relationship between the width of the continental shelf, upwelling, and iron in the ocean. This was the latest in a series of experiments evaluating the impact of iron on ocean productivity.

Although iron is scarce in the ocean, this essential micronutrient can play a big role in marine ecosystems. Phytoplankton, the single-celled algae that form the base of the marine food chain, require iron for photosynthesis and growth. In regions of the ocean where iron levels are particularly low, lack of the metal can limit the size of phytoplankton populations. If iron is added to the ecosystem, the tiny plants bloom, and this increase in food supply can spread up the food chain, supporting population booms of many different kinds of marine animals. Phytoplankton even play a part in regulating global climate: they use up carbon dioxide as they photosynthesize, and the removal of this greenhouse gas has a cooling effect on the planet.

MBARI oceanographer Ken Johnson has worked for years to further understanding of how iron affects phytoplankton populations, and to learn more about how this almost insoluble metal becomes dissolved into seawater. Last month, Johnson and a team of MBARI oceanographers spent a week aboard MBARI’s research vessel Western Flyer, studying how iron regulates marine ecosystems off the central Californian coast. 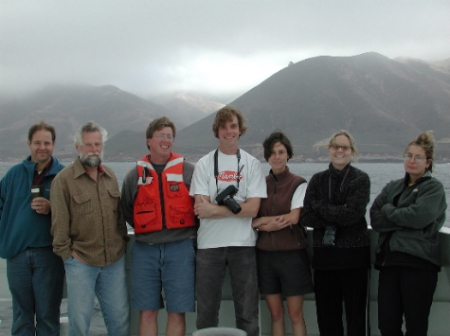 Part of the MUSE-2 science crew aboard the R/V Western Flyer.

One of the goals of this cruise, called MUSE-2, was to return to sites that were sampled during the original MUSE experiment of 2000. MUSE was a broad study of the ocean circulation and chemistry of the Monterey Bay, and how the two interact to shape the life of plants and animals that live there. By resampling the same spots in MUSE-2, scientists hope to get a better idea of how the physical and chemical characteristics of these sites change over time. 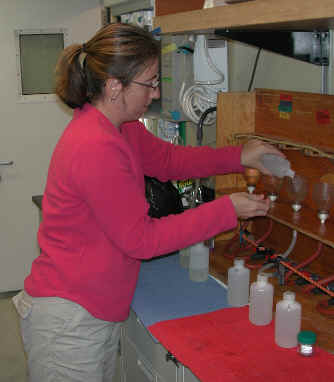 Seawater samples are filtered in the Western Flyer‘s on-board laboratory for later analysis.

Another important goal for MUSE-2 was to learn more about how iron becomes suspended in seawater. Although there are several natural processes that “fertilize” the ocean with iron—such as windstorms that blow iron-rich land dust out to sea, or underwater volcano eruptions— Johnson believes that the most important process along the California coast is a phenomenon called upwelling. Upwelling occurs when strong alongshore winds interact with the Earth’s rotation to drive surface seawater away from the coast, causing nutrient-rich deep waters to flow towards the land and up towards the surface. As the upwelling waters flow over the sea floor they stir up the sediment, dissolving iron from the sediment into the water.

MUSE-2 compared two upwelling regions, one north of the Monterey Bay, off the town of Davenport, and another off of Point Sur, south of the bay. Although both sites experience strong upwelling, the waters off of Point Sur typically contain a lot fewer phytoplankton than the northern site. Johnson believes that the explanation may be found in the different topography of the two regions. Both upwelling sites sit on top of the continental shelf, the shallow, gently sloping submerged edge of a land continent. The continental shelf off of Point Sur is relatively narrow, dropping quickly off into the deep sea, whereas the shelf at the Davenport site stretches far offshore. Johnson’s hypothesis is that the broader continental shelf off Davenport provides more surface area for upwelling waters to sweep over, disturbing the sediment and dissolving iron as it travels. Less surface area in the southern site may mean less iron in the water, and this could be what is limiting phytoplankton populations off of Point Sur. 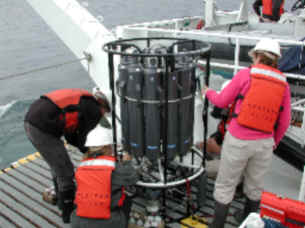 Scientists take samples from a CTD rosette, a sampling device that collects water from different depths.

During the cruise, the science crew was able to sample both sites in upwelling and non-upwelling conditions. They are still processing all the information collected, but Zanna Chase, a researcher in Johnson’s lab and chief scientist for the cruise, said that a preliminary look at the data showed that iron levels were higher off of Davenport under both conditions. This finding fits with the hypothesis that the narrow shelf at the Point Sur site is limiting the amount of iron in the seawater.

The results of the study will have implications that extend far beyond Monterey Bay. Because phytoplankton are important for both climate regulation and ocean productivity, intentional fertilization of the oceans with iron has been suggested as a means to slow global warming and increase fish catches. But Johnson and other scientists stress that there is still much to learn about iron’s role in the ocean, and about how intentional fertilization could affect other marine life. Last winter, Johnson and other MBARI scientists took part in one of the most complex iron fertilization experiments to date, when they joined researchers from 17 other institutions to fertilize two patches of iron-limited water in the Southern Ocean. They caused a bloom of phytoplankton that was visible from satellites orbiting the earth. As the crew sailed into the blooms, real-time sensors towed behind the ship recorded dips in CO2 levels of up to ten percent.