From microplastics contamination through jellyfish metabolism to ocean carbon flux 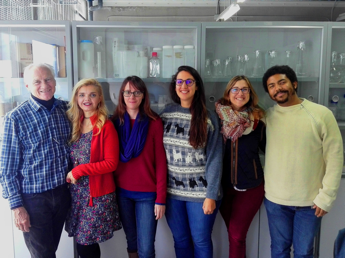 EOMAR research focuses on plankton metabolism. We measure physiological and enzymatic respiration and ammonia excretion in mysids, protozoans, bacteria, macro-algae, and seawater from different oceanic areas. In addition, we study the effects of microplastic contamination on marine biota in the waters around the Canary Islands. Recently, we have begun looking at the carbon dioxide (CO2) production side of respiration using isocitrate dehydrogenase as a respiration proxy and have developed a model of CO2 production that calculates plankton respiration and vertical ocean carbon flux. Additionally, we are researching previously ignored jellyfish metabolism, not only to address this neglect, but also to improve future food web calculations. We are measuring the thermodynamics of jellyfish metabolic parameters to learn about their physiological state, needs, and limitations in the marine environment. Finally, we apply this research to develop new ways to profile ocean carbon flux, nutrient retention effciency, and adenosine triphosphate production in ocean water columns.