Of pingos and pockmarks

In mid-September, while Monterey Bay basked in late summer beach weather, MBARI geologist Charlie Paull stood shivering at the base of a low hill, several hundred miles north of the Arctic Circle and about a dozen miles from anywhere.

He had just arrived and had already endured a ten-mile journey across frigid Arctic waters in a small open boat. He later learned that a woman had been mauled by a grizzly bear in this remote spot only a few weeks before his arrival. But Paull was not thinking about the cold or the bears. He was excited to see, rising before him, one of the enigmatic geological features that had brought him to the Arctic: a pingo. 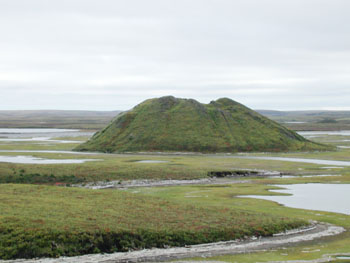 He climbed slowly up the side of the pingo. Reaching the top, he paused at the edge of a small pond and gazed out at the barren coastal plain, where a thin coat of moss and tundra barely hid the solid permafrost beneath. The pingo on which he stood was the highest point around, except, off in the distance, the low rounded silhouette of another pingo. He had read that over a thousand of them dotted this remote peninsula. His gaze shifted to the small pond at his feet. Looking closely, he discovered small bubbles rising through the water. He smiled.

He thought about permafrost and ice and the current theory of how pingos form. In most parts of the Arctic, permafrost (a layer of permanently frozen soil) extends hundreds of meters below the earth’s surface. However, beneath Arctic lakes, the permafrost melts, leaving a region of water-saturated soil. According to theory, a pingo is created when one of these lakes dries up, allowing permafrost to reform at the ground surface, trapping water underneath. As the surface permafrost thickens, it puts pressure on the subsurface water, which creates a bulge in the overlying permafrost—a pingo.

Paull had his doubts about the standard theory, which focused on the fact that pingos—or at least “pingo-like-features”—were known to exist on the sea bottom (where lakes are rather rare). Some researchers contended that these submarine pingos had formed on land during periods of lower sea level. However, Paull thought this unlikely because waves and ice would have quickly eroded and destroyed the pingos as the ocean rose around them.

Paull suspected that the submarine pingos had formed beneath the sea, and that they might still be forming. This was why he had come to the Arctic. About five years before, he and fellow geologist Bill Ussler had written a National Science Foundation (NSF) grant proposal to investigate methane hydrates in sea-bottom sediments and their relationship to submarine pingos. The NSF had turned down his proposal with the comment that submarine hydrate research was not a research topic they were interested in funding.

Within the next few years, however, funding agencies became vitally interested in Arctic processes, global warming, and gas in sea-bottom sediments. Scientists learned that huge volumes of methane were locked up in oceanic sediments, mixed with frozen water to form methane hydrates. Some even suggested that these hydrates could have triggered extreme shifts in the Earth’s climate by suddenly releasing vast amounts of methane (a greenhouse gas) into the atmosphere.

With undersea methane becoming a hot topic, Paull and Ussler decided to resubmit their proposal. As Paull put it, they simply asked the question, “Why don’t we go and see what it takes to get gas released from methane hydrates today?” They pointed out that the Arctic Ocean was a logical place to look for such releases because hydrates in this area had been slowly warming since the end of the last ice age, more than 10,000 years ago.

They also suggested that, rather than searching the entire Arctic ocean for dissolved gas, scientists should look for geological features that might indicate where gas was emerging from the sediment. Submarine pingos were one such feature. Similarly, gas might also be found around submarine pockmark fields, where the sea bottom is scarred by hundreds of meter-deep pits in the sea floor.

This time, their proposal was enthusiastically accepted. This was why Charlie Paull was standing on a low hill, watching bubbles emerge from a shallow pond, and smiling. 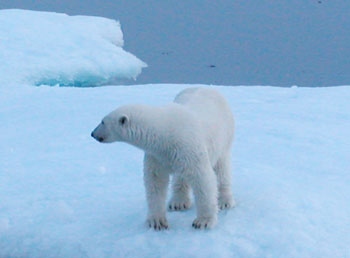 A curious polar bear comes to visit the research vessel. This photo was not taken with a telephoto lens. Image: Charlie Paull © 2003 MBARI

Several days later, he set out in the Canadian Coast Guard vessel Nahidik, with a goal of obtaining cross-sections through several submarine pingos using seismic profiling—bouncing sound waves off sediment layers in the sea bed. But these efforts were thwarted by the vagaries of drifting ice and the very real risk of marauding polar bears climbing on board the low-sided survey vessel. Thus, Paull had to rely on decade-old surveys as he began the second part of his research, which focused on obtaining sediment cores in and around submarine pingos.

However, before he could begin his second cruise, aboard the Canadian icebreaker Sir Wilfred Laurier, the challenges of the Arctic became apparent once again. Thick fog prevented him from flying to meet the icebreaker in time for its departure. After four days of what he called “a mild form of purgatory,” the icebreaker came to him, or at least within 200 miles of where he was stranded, so that the ship’s helicopter could pick him up.

On board the icebreaker, Paull met Ussler, fellow MBARI researchers Rendy Keaten and Richard Whitmarsh, and scientists from Canada and the United States Geological Survey. Although the MBARI scientists were all new to Arctic research, the Canadians were old hands who, according to Paull, had “hung out together in the Beaufort Sea for years.” 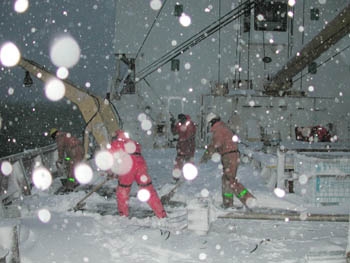 Oceanographic research in the Arctic means shoveling snow off the deck of the research vessel… even in September! Image: © 2003 MBARI

They spent the next three weeks dodging pack ice and shallow water while collecting about eighty sediment cores in and around half a dozen submarine pingos and two pockmark fields. This was their primary mission—to take samples of mud and ice and to analyze the water and gas within these samples. Specifically, they wanted to find out if gas was trapped in the sediment, and if so, determine what kind of gas it was and where it was coming from.

To their surprise and delight, the researchers found plenty of gas in cores from the submarine pingos. They also used a small remotely operated vehicle (ROV) to record video of gas bubbling out of the tops of two submarine pingos. Encouraged by this finding, Ussler decided to try and obtain a sample of this gas. Improvising with some decidedly low-tech tools, including an old funnel and a large plastic syringe, he succeeded in converting the small ROV into a submarine gas-collection system. He also used a small boat, a plastic bucket, and his bare hands to collect gas bubbling to the sea surface—no mean feat in frigid Arctic water.

Early results from the geochemical analyses are intriguing. For example, the gas emerging from the submarine pingos appears to be nearly pure methane. This suggests that it did not originate from a natural gas reservoir that lies deep below the sea floor in this area. In addition, water in the submarine pingo cores is only half as salty as water in the surrounding sediments, suggesting that it came from buried freshwater ice rather than from the overlying seawater.

Paull is quick to point out that none of these early data conclusively proves that the gas and fresh water in the pingos originated in methane hydrates. However, the circumstantial evidence is very suggestive. His team is currently analyzing oxygen isotopes in water from the cores, which will be compared with oxygen isotope ratios in local seawater and groundwater.

With his data still coming in and numerous cores to analyze, Paull and his coworkers are not yet ready to advance their own theory of how pingos form. But they are convinced that pingos and pockmarks are active features that relate to gasses and/or liquids flowing up from the subsurface.

With any luck, their research will supply another piece in the scientific puzzle of past and present climate change. Not only that, Paull’s team will be able to provide a new perspective on a geologic feature that has baffled geologists for generations. Not a bad result for a month’s work—and half a decade of preparation. Several months after his trip to the Arctic, Charlie Paull is still smiling… 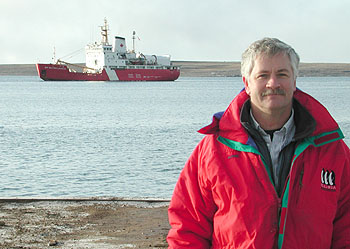