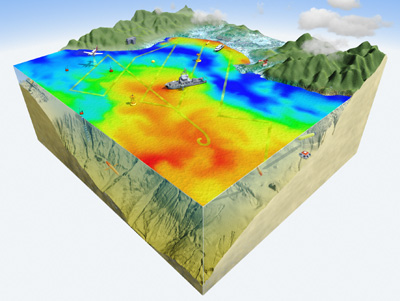 The Autonomous Ocean Sampling Network (AOSN) Monterey 2003 Field Experiment involves several ships and dozens of floating, diving, and flying oceanographic instruments operating simultaneously. Their goal is to observe and model water movement, temperature, and other upwelling-related processes in Monterey Bay over a 4-week period during August, 2003. In this image of the Monterey Bay study area, the color of the ocean surface indicates water temperature–cold upwelling water is shown in blue and warmer water in yellow and red. Image credit: David Fierstein © 2003 MBARI

MOSS LANDING—Oceanographers from more than a dozen prestigious research institutions have converged on Monterey Bay this month to examine the bay as never before, collaborating in a unique research experiment. They have come together as part of the Autonomous Ocean Sampling Network (AOSN) program, funded by the Office of Naval Research. This multidisciplinary project is being coordinated and hosted by the Monterey Bay Aquarium Research Institute (MBARI) in Moss Landing.

The AOSN 2003 Monterey Field Experiment brings together physical oceanographers, marine biologists, computer modeling experts, and engineers who design robots for undersea research. This diverse group is studying the bay using cutting-edge computer models and high-tech observational tools such as satellites, airplanes, ships, drifters, buoys, autonomous underwater vehicles, and an entire fleet of undersea gliders. The researchers are using these tools to observe and predict the upwelling of cold, nutrient-rich water that occurs off Monterey Bay during the summer months. These upwelling events create blooms of marine plankton that support the abundant fisheries and other wildlife in and around the bay.

Although tow nets, CTD casts, and other time-tested oceanographic tools are being used in this experiment, some of the most useful data will come from a fleet of autonomous underwater vehicles or AUVs. AUVs are underwater robots programmed at the surface to follow a specific course underwater, collecting data as they go. Returning to the surface, they radio the collected data to a ship or shore station. AUVs are relatively new tools for oceanographers and never before have such large numbers been deployed simultaneously.

Some AUVs, such as MBARI’s Dorado, are propelled by electric motors. These AUVs travel relatively quickly (around 3 knots) and can carry a whole suite of oceanographic instruments. However, their high power consumption limits them to only about 10 hours of sampling before their batteries must be recharged.

Other AUVs, known as gliders, travel forward using lift generated as they rise and fall through the water column. Internal computers change a glider’s buoyancy by pumping mineral oil into or out of an external bladder. When the bladder is full, the glider displaces a greater volume than when the bladder is empty. When oil is pumped out of the bladder, the glider’s effective volume decreases while its mass stays the same, until it becomes dense enough to sink. When the glider reaches a predetermined depth, the oil is pumped into the bladder and the glider rises toward the surface again. Short wings allow a glider to travel horizontally as it rises and falls. Since they have no motors, gliders use very little power, and can stay at sea for weeks or even months at a time. However, they travel relatively slowly (less then 1 knot) and can only carry one or two instruments at a time. During the AOSN 2003 field experiment, up to 15 different gliders may be criss-crossing Monterey Bay at any one time.

AUVs are particularly useful because they allow scientists to gather continuous measurements over large areas and long time periods, even during rough weather. They can also be programmed to “patrol” a section of ocean, waiting for interesting events (such as upwelling) to occur. This is one example of adaptive sampling, an important element of the AOSN 2003 field experiment.

Gliders and other AUVs are well suited for adaptive sampling because they are mobile and can change their sampling strategies in response to changes in the marine environment. They can also work together as a team. For example, if one AUV detects an interesting event (such as a plume of upwelling water), researchers can direct the other gliders to change course to gather samples from within the same plume. Similarly a fleet of gliders can help scientists determine the most efficient path to follow when collecting data in areas of strong current flow.

Like swirling clouds or eddies in a stream, upwelling currents and fronts form complex, rapidly changing patterns. These three-dimensional patterns are difficult to measure, let alone predict. For this reason, oceanographic computer models, like weather forecasts, must be performed using powerful supercomputers.

Two separate computer models are being used simultaneously during the AOSN 2003 field experiment. In their most simple form, these models use weather data and forecasts for the Eastern Pacific Ocean to predict the course of ocean currents and vertical mixing. They also attempt to predict the effects of such currents on concentrations of nutrients and populations of marine algae and other microscopic organisms that form the basis for ocean food chains.

During each day of the AOSN field experiment, oceanographic researchers collect and evaluate measurements from dozens of instruments above, below, and on the surface of Monterey Bay. At the end of the day, all measurements are sent to a shared computer where they can be accessed by all of the researchers. These data are fed into the computer models to predict changes in circulation, chemistry, and biological processes in and around the bay over the next few days.

The output from the models (in the form of images and data) is used in several ways. First, scientists can compare a model’s predictions with observed conditions over the following days. Second, they can compare the two different models to see which is more accurate. Third, the output from the models can be used to decide where to focus sampling efforts on the following day. This process, called “adaptive sampling,” is an important part of the AOSN field experiment.

Oceanographic networks—the wave of the future

One of the benefits of a program like the AOSN 2003 field experiment is that it lets researchers from many different fields work side by side and share the same data. At the end of each day, the scientists and engineers gather to compare  their observations and the model results. With gigabytes of data coming in from dozens of different instruments, one challenge has been simply to find ways to sort through and visualize the data. But this work is essential for future oceanographic experiments, which will involve even larger networks of fixed and mobile instruments. Such integrated ocean observing systems are the wave of  the future, and the AOSN 2003 Monterey Bay experiment is at the crest of this wave.

Note: These images may not be copied, reprinted, or used without explicit permission from MBARI. Members of the media needing higher-resolution versions should contact Debbie Meyer, pressroom@mbari.org, 831-775-1807.

Overview of AOSN experiment in Monterey Bay:
The Autonomous Ocean Sampling Network (AOSN) Monterey 2003 Field  Experiment involves several ships and dozens of floating, diving, and flying oceanographic instruments operating simultaneously. Their goal is to observe and model water movement, temperature, and other upwelling-related processes in Monterey Bay over a 4-week period during August, 2003. In this computer-generated image of the Monterey Bay study area, the color of the ocean surface indicates water temperature–cold upwelling water is shown in blue; warmer water is yellow and red. 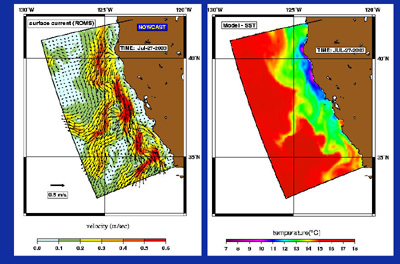 Sample output from computer models:
These illustrations show the results of computer models for predicting ocean surface currents (left) and sea-surface temperature (right) along the Central California Coast. Data from the Monterey 2003 Field  Experiment will be used as input data for such models. It will also be used to check the accuracy of the models’ predictions on a daily basis. 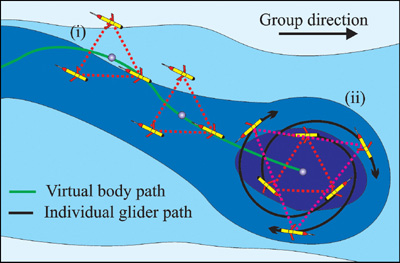 How adaptive sampling works (example 1)
This diagram shows an example of adaptive sampling using a group of three gliders (yellow objects) at four different time periods. In this case, the gliders are studying a specific water mass or region of interest (indicated in dark blue). First the gliders follow changes in temperature or salinity to “home in” on the region selected for study. After they reach the area of interest, the gliders circulate around it at various distances, gathering data, to locate any sub-regions of particular scientific interest. 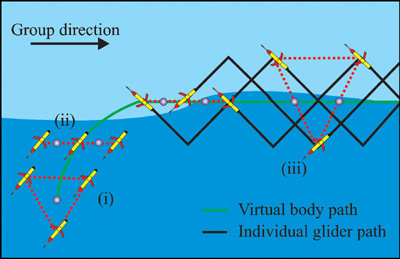 How adaptive sampling works (example 2)
This diagram shows how a group of three gliders can change formation to monitor an oceanic front (a meeting of two different water masses). Initially (i) the gliders move in a triangle formation until they intersect the front. After they reach the frontal boundary they move in line with each other (ii). Finally they move along the frontal boundary in a zig-zag pattern to collect data across the front. 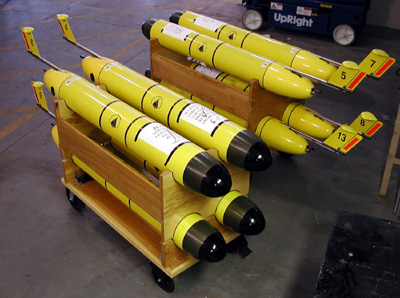 Woods Hole gliders arriving at MBARI
A whole fleet of undersea gliders from Woods Hole Oceanographic Institute will be traversing Monterey Bay during the AOSN Monterey 2003 Field  Experiment. Programmed at the surface, these gliders follow a roller-coaster path through the water, collecting data on temperature and salinity as they go. Each time they reach the surface, they send their data and location information back to shore stations via satellite. 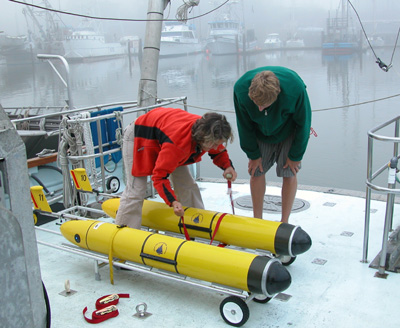 Woods Hole gliders being prepared for deployment
Researchers from Woods Hole Oceanographic Institute secure their gliders on board a ship, in preparation for releasing them in Monterey Bay. Small wings will be mounted on the sides of the gliders before they are released into the sea. These gliders can stay at sea, following a pre-programmed path, for up to 2 weeks. 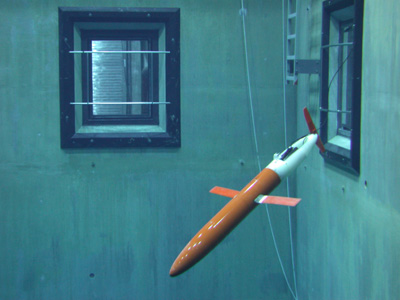 Scripps glider in the MBARI test tank
An undersea glider from the Scripps Institution of Oceanography being tested in the MBARI test tank. These gliders can dive to depths of over 1000 meters, and can stay at sea for up to a month at a time. Programmed at the surface, these gliders follow a roller-coaster path through the water, collecting data on temperature and salinity as they go. Each time they reach the surface, they send their data and location information back to shore stations via satellite. 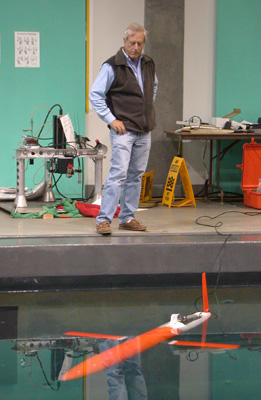 Scripps glider in the MBARI test tank
Russ Davis, professor at Scripps Institute of Oceanography, works on an undersea glider in the MBARI test tank. These gliders can dive to depths of over 1000 meters, and can stay at sea for up to a month at a time. Programmed at the surface, the gliders follow a roller-coaster path through the water, collecting data on temperature and salinity as they go. Each time they reach the surface, they send their data and location information back to shore stations via satellite. 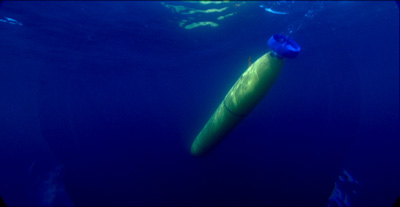 MBARI AUV underwater
Among the many high-tech vessels that will be collecting data in Monterey Bay during the AOSN Monterey 2003 Field  Experiment is this autonomous underwater vehicle (AUV) created by MBARI. Like the underwater gliders, this AUV follows a preprogrammed course underwater, collecting data as it goes, then surfacing to relay this data to scientists. With its electric motor, this AUV can travel faster and is more maneuverable than the undersea gliders. It can also carry a greater variety of oceanographic instruments. 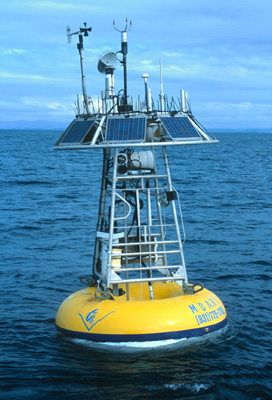