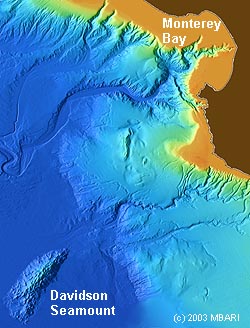 Davidson Seamount, located 75 miles southwest of Monterey and just outside the Monterey Bay National Marine Sanctuary boundary, is an inactive volcano that was first mapped as a “sea mountain” in 1933. It is one of the largest known seamounts in U.S. waters, rising 2,300 meters (about 7,500 feet) above the ocean floor, with another 1,300 meters (about 4,300 feet) of water above its summit. Davidson Seamount dominates the relatively flat ocean floor off Central California much like Mount Shasta dominates the landscape of Northern California.

In 2002, during a week-long cruise funded by NOAA’s Office of Exploration and led by the sanctuary, MBARI and other partners made an initial survey of the biology and geology of the Davidson Seamount. One of the primary purposes of this cruise was to characterize the distribution and abundance of the creatures living on the seamount. A log of this expedition can be found on the NOAA Ocean Explorer website. 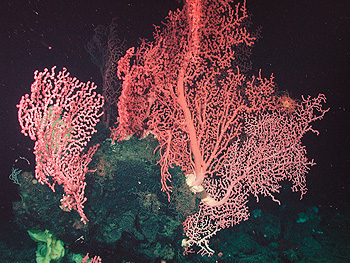 Near the crest of Davidson Seamount are spectacular forests of deep-sea “bubble-gum” coral. Some of these colonies are over 2.5 meters (eight feet) tall. Image: (c) 2002 MBARI/NOAA

“We were blown away by the size, age, and diversity of the deep-water corals we saw during our 2002 Davidson cruise,” said Andrew DeVogelaere, Sanctuary Research Coordinator and Chief Scientist for the 2006 expedition. “Indeed, the discoveries we made during that cruise prompted members of the public to propose that Davidson Seamount be protected as part of the Monterey Bay National Marine Sanctuary. We wanted to go back to learn why so many extraordinary corals thrive there and to determine their age and growth patterns.”

The main scientific goal of the current cruise is to improve our understanding of deep-water corals. Scientists on the cruise include experts on the ecology of deep-sea organisms and the ageing of corals. Using MBARI’s research vessel Western Flyer and its remotely operated vehicle (ROV) Tiburon, scientists will be able to explore coral colonies, take samples, and capture high definition digital images.

When exploring deep-sea areas such as Davidson Seamount, marine scientists never know what they will find. As MBARI marine biologist George Matsumoto explains, “The last time we went to Davidson, we saw several new species of organisms. I’m sure we’ll find new animals on this cruise as well. It will be a great opportunity do some interesting science, as well as to inform the public.” 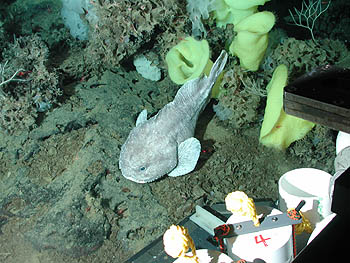 A variety of deep-sea fish, such as this blob sculpin, live among yellow sponge gardens of Davidson Seamount. Image: (c) 2002 MBARI/NOAA

In order to share the wonders of Davidson Seamount with as many people as possible, MBARI has made arrangements for film makers from the British Broadcasting Corporation (BBC) to join the cruise. The BBC will film the Davidson Seamount’s spectacular deep-sea life for an upcoming television series, Planet Earth, which will be broadcast in the United States and internationally.

Starting on January 26, 2006, students and the general public can share the expedition’s discoveries through NOAA’s Ocean Explorer website. Daily logs and video clips will be posted there. Visitors to the web site will also have opportunities to email questions to scientists on the cruise.

A press conference will be held at the MBARI campus in Moss Landing, California on Wednesday, February 8, 2006 at 9:30 a.m. Scientists at the conference will present the expedition’s initial findings to the news media. Still and video images from the cruise will be available as well.

The Davidson Seamount cruise will continue from January 26 through February 4, 2006. NOAA’s Office of Exploration, MBARI, and the BBC provided funding for the expedition. 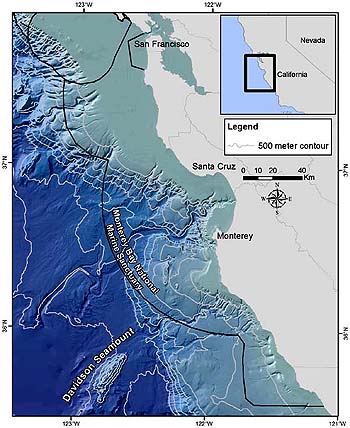 This map of Davidson Seamount shows its position in relation to the San Francisco Bay area and the boundaries of the Monterey Bay National Marine Sanctuary. 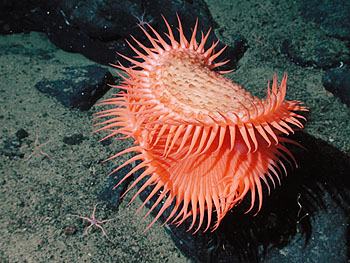 A Venus-flytrap anemone on Davidson Seamount. 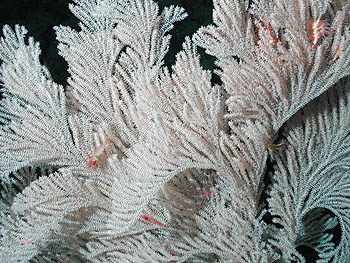 Close-up view of a gorgonian coral with small shrimp. 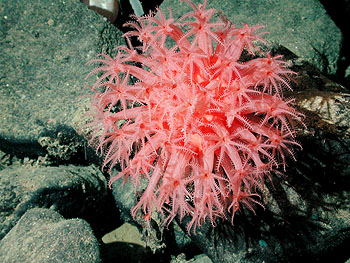 Mushroom coral (Anthomastus sp.) growing on Davidson Seamount. These soft corals capture food particles with their stinging tentacles. When threatened, they withdraw their tentacles, leaving a rounded knob that looks like a mushroom. 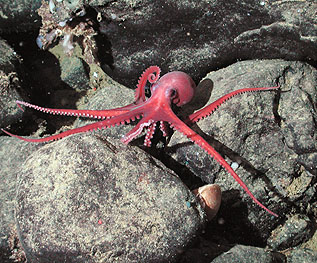