A major focus of our laboratory is the response of marine animals and ecosystems to anthropogenic changes in ocean conditions – particularly ocean acidification. Carbon dioxide emissions to the atmosphere have raised atmospheric CO2 levels far beyond the range of variation known to occur for the past million years, and perhaps as much as 30 million years. In addition to greenhouse warming due to these emissions, the oceans have absorbed much (~41%) of our fossil fuel carbon dioxide. This excess CO2 in the ocean reacts with seawater to form carbonic acid, which reaches an equilibrium under existing ocean conditions to increase the acidity of the oceans and reduce carbonate ion concentrations, a key mineral used for the formation of shells and skeletons of marine organisms. Will ocean life tolerate this massive and rapid change in ocean chemistry, in addition to warming and increasing hypoxia in deep waters?

“Environmental conditions throughout the world ocean are changing in response to fossil fuel emissions and greenhouse warming in the atmosphere. Climate change and high carbon dioxide levels in the atmosphere are, in turn, causing a domino-like series of changes in ocean conditions, including ocean warming, decreased oxygen content of deep ocean waters due to reduced mixing of oxygenated surface waters to depth, and ocean acidification.”
—Scientist Jim Barry

In addition to the unintentional changes in ocean conditions listed above, society is also considering methods to avoid atmospheric emissions and its associated climate impacts, including the capture of waste carbon dioxide at power generating plants, followed by the injection of carbon dioxide (as a liquid) into deep-sea waters. This carbon storage notion, known as direct deep-sea carbon dioxide sequestration, could be effective in avoiding some climate warming owing to a reduction in atmospheric emissions, but could also cause potentially important changes in the chemistry of deep-sea waters. Another idea for reducing atmospheric CO2 levels is the fertilization of surface waters in the oceans where the major nutrients used for phytoplankton growth (e.g. nitrate and phosphate – just likely your plants at home) are abundant, but a key micronutrient (iron) is present in only low levels. Spraying an iron-rich solution on these surface waters has been shown in many areas to stimulate a phytoplankton bloom, which will ultimately lead to higher rates of organic debris sinking toward the bottom. As it sinks, it will be remineralized (consumed and metabolized) by organisms in the water column. If enough extra organic material makes it all the way to the deep-sea, it will bring with it more carbon than normally sinks, thereby ‘sequestering’ carbon that was drawn from surface waters by phytoplankton growth into deep waters. This leads to more carbon dioxide entering surface waters from the atmosphere, ultimately reducing the amount of extra CO2 in the atmosphere. This idea, ‘iron fertilization’ may or may not work, but if it does, it will increase the carbon dioxide levels in deep waters, as well as reducing oxygen levels, due to the remineralization of the extra organic material sinking to depth.

Our laboratory uses a variety of experiments in the laboratory and in the ocean to examine how changing ocean conditions, mainly related to ocean acidification, affect the physiology and survival of marine animals. We use MBARI’s remotely operated vehicles (ROVs) to collect animals live and bring them to the laboratory where we perform experiments to examine their physiological responses to higher carbon dioxide levels, or lower oxygen levels, or both. In addition, we develop in situ methods to study deep sea animals in the deep sea and measure their response to changing ocean conditions. 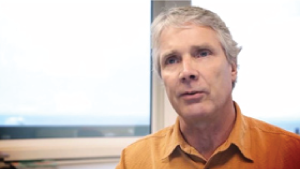 Oct 8, 2014 – The latest and most important scientific findings about ocean acidification have been compiled into a single, 100-page publication. The report was co-authored by Monterey Bay Aquarium Research Institute Senior Scientist James Barry.
Scroll to top