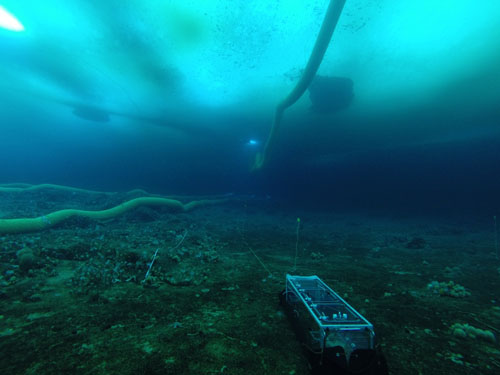 antFOCE is deployed in 14 meters of water under ice in O’Brien Bay approximately five kilometers from Casey Station, Antarctica.

Ocean acidification poses a threat to the life and diversity of marine ecosystems. MBARI scientists and engineers have designed a sophisticated tool for studying the effects of ocean acidification that can be applied to various marine environments, from shallow-water kelp forests to the deep sea. This tool, called the Free Ocean Carbon Enrichment (FOCE) system, allows researchers to study the impacts of ocean acidification on marine animals in their natural habitat. The system is available as an open-source package to researchers wanting to use FOCE technology in marine environments of interest.

The FOCE system developers at MBARI help researchers install systems in these environments. Outside of Monterey Bay, the FOCE system has been installed in the bay of Villefranche-sur-mer (France) and Heron Island, on the Great Barrier Reef. Recently, John Stark and Glenn Johnstone, of the Australian Antarctic Division of the Department of the Environment, sent word from Antarctica that their system (called antFOCE) was installed successfully and is functioning properly.