The cruise is rapidly coming to a close as we steam back to Moss Landing after completing all of our planned ROV dives. I have been doing field work on the Gorda and Juan de Fuca Ridges for many years and I think this is the first cruise when we were able to complete all our planned work without losses due mainly to bad weather. A nice change, to be sure!

The first priority this year was to complete AUV mapping of the portions of the 2011 lava flows that we had not completed in 2011. That was accomplished earlier in August and we then used the brand new maps to successfully guide ROV work on two parts of the new flows. These flows erupted in April 2011 at Axial Seamount are the best mapped and sampled of all the known historical eruptions on the global mid-ocean ridge system.

Our second major objective was to map and sample three large lava pond complexes on the deep north and south rift zones, and this was also completed, with the exception of AUV mapping of the complex on the north rift zone. These ponds have been discussed in several previous posts. The key questions we want to answer include if each pond complex represents a single large volume eruption that might trigger collapse events of the summit caldera, or even if several of these pond complexes might represent even larger volume single eruptions. The keys to determining the answers are to establish the age and composition of flows to see if they are all the same. These complexes have several slightly different depths and we collected multiple lava and sediment core samples from each level of all three complexes. Our dive observations suggest that the different portions of each complex will be similar in age, and the lava samples had similar mineral contents. Once on shore, we will be determining the ages of the recovered cores and from that, of the underlying lava flows. We will also chemically analyze the volcanic glass on the outer parts of the lavas that represents the quenched melt. When all that is completed, we should know if each complex formed during a single eruption and if several of the complexes on the south rift might have formed as parts of an even larger eruption. The sediment cover on the north rift ponds was clearly thicker, and so that complex is older than on the south rift.

The third major objective was to continue work on a widespread deposit of glassy volcanic sediments (volcaniclastite) that blankets the upper flanks of the volcano outside the caldera. We have sampled this deposit in the past, but had hoped to improve our coring techniques to recover more of the 1-2 meter thick deposits. These glass-rich materials have proved extremely difficult to sample effectively and this time proved no exception. However, we located a place where the deposits crop out along a wide fissure and were able to sample the deeper portions of the deposit by using a series of short cores in the fissure. These deposits have also proved to be very challenging to determine ages from, as the glassy or hydrothermal sediment layers contain few, if any foraminifera, to be radiocarbon dated. Only after careful examination and subsampling will we know if we have improved our knowledge about how, when, and why these deposits formed.

In all, we collected almost 400 samples with about 120 lava samples, 40 animals, and the rest cores of various types. Two samples are beer cans, both unchanged since they arrived on the seafloor perhaps 40 years ago.

As is true for every cruise, it takes a lot of people to make this all happen and I want to thank them all. The seamless operations of the ship and ROV reflect the hard work of Captain Andrew McKee and his ship’s crew and Chief Engineer Matt Noyes and his team and of Chief ROV Pilot Knute Brekke and his team. Master chef Patrick Mitts fed us too well, thwarting many plans to shed a pound or two during the cruise. My science party of MBARIans Jenny Paduan, Linda Kuhnz, Lonny Lundsten, and Brian Dreyer, and collaborators Ryan Portner, Christoph Helo, Ken Rubin, Bill Chadwick, Cheryl Gansecki, and Jessie Whelpley worked well together with the experienced hands teaching our two first-timers the many and varied tasks that have to be completed to run the dives and to document and curate the samples after the dives. My thanks to you all for a great cruise. 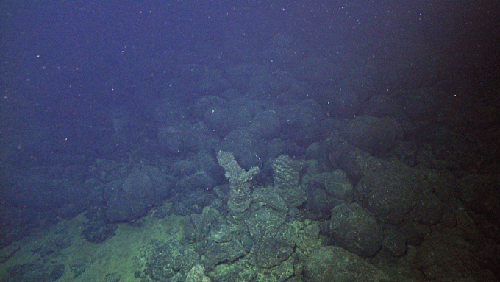 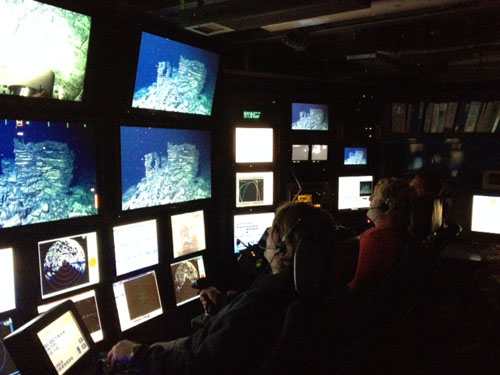 In the ROV control room, observing a large lava pillar complex in a drained lava channel. Randy Prickett (left) is piloting the ROV Doc Ricketts and Ken Rubin (right) is at the main camera station. 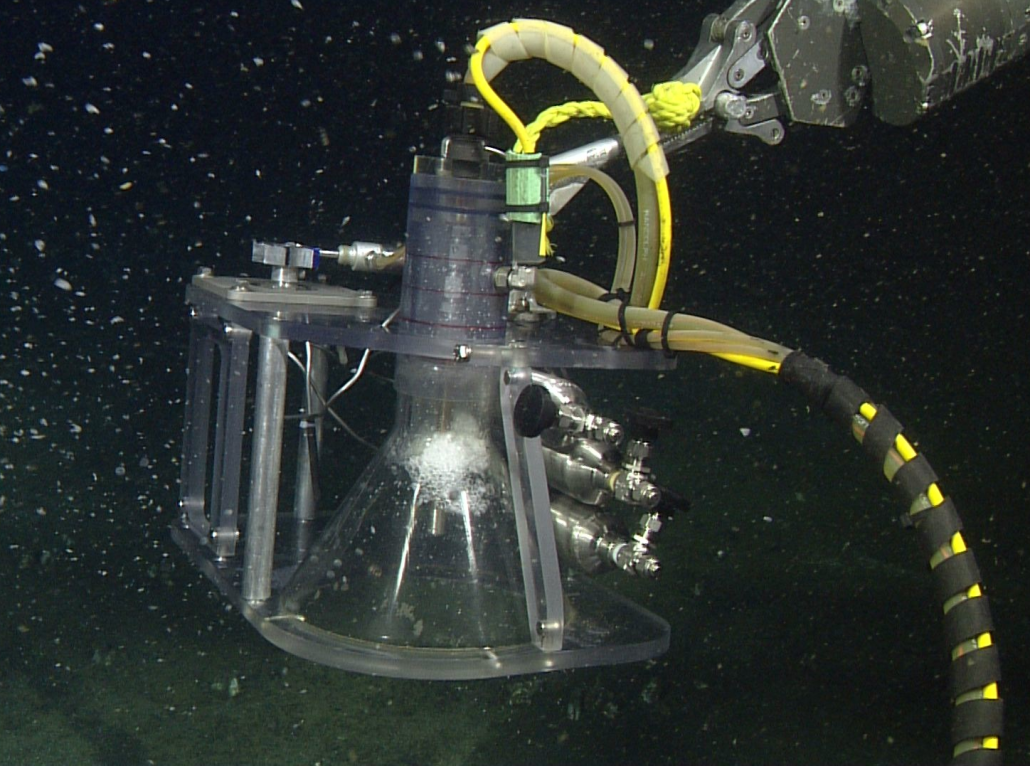 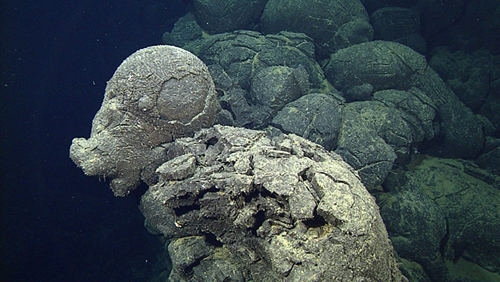 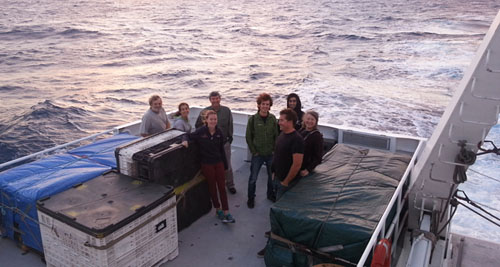 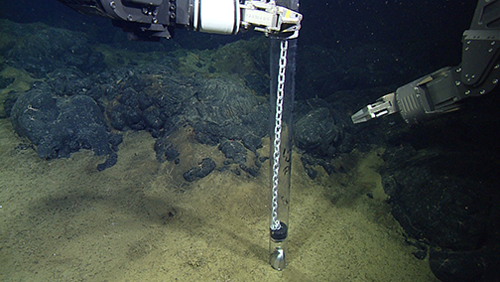