Since 2007 we have been combining the 1-meter horizontal resolution maps acquired by the MBARI mapping AUV with ROV observations and sampling. We outline the boundaries of lava flows and identify old/young relationships in the maps and confirm these relationships with ROV observations and chemical compositions of collected lava samples. We can target the sampling of individual lava flows, other volcanic structures, and hydrothermal chimneys with a precision unrealized until recently. We have pioneered the use of radiocarbon dating of foraminifera shells collected with push cores from sediment on top of a lava flow to give a minimum eruption age of the underlying lava flow. These ages and sequences of flows identified in the high-resolution AUV bathymetry, have enabled us to produce a geologic map of the summit of the seamount. We have developed a two manipulator-held piston corer to more reliably collect cores up to 1.5 meter long of the thick sedimentary deposits on the flanks of the volcano. These deposits preserve another aspect of the volcano’s geologic history: explosive periods and caldera collapse. 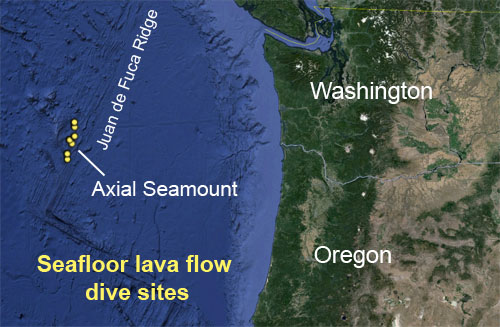 There are three primary objectives for our ROV dives at Axial Seamount during this expedition. The first objective is to sample the thick volcaniclastic deposits (ash and volcanic glass fragments) on the upper flanks and rim of the summit caldera. The goal is to refine the timing of when the layers of the deposits formed to better understand changes in the behavior of the volcano and chemistry of the lava, which ultimately reflect changes in the magma reservoirs at depth. In previously collected cores, the top zone has thin clay and volcanic glass-shard layers with variable compositions, so deriving from multiple different, relatively mild eruptions. These thin layers overlay one or more 10-20 centimeters thick layers of almost pure glass having homogeneous compositions, suggesting that somewhat explosive eruptions generated abundant fragmental material in the past. However, the compositions of the glasses in these thick layers change as one goes around the caldera, suggesting that the eruptions were localized and clastic material was not dispersed very far. The behavior of the volcano was generally different then to have produced these thick glassy layers. Underneath these glass units is a distinctly different, bedded greenish-gray hydrothermal deposit with very fine glass shards that may have formed during phreatomagmatic (violent, steam-driven) eruptions, perhaps synchronous with or soon after the caldera collapsed. Radiocarbon dating of foraminifera shells in layers above and below suggests this material is only about 1000 years old, despite overall sediment thicknesses up to nearly two meters.

At a few locations on the caldera rims, foraminifera-rich ooze beneath the hydrothermal layer is older, dating to two, 19, and 31 thousand years old at three locations. These thicker deposits are in areas where pre-caldera summit overflows did not re-pave the sediment-covered flanks, presumably because they were elevated or shielded by faults. We will return to the oldest site with better coring equipment and techniques to sample the complete volcaniclastic sedimentary section to the underlying lava, and we will also collect cores farther away from the caldera rim where the deposits are thinner.

The second objective is to map and sample large-volume ponded and drained lava flows on the lower rift zones of Axial Seamount. We will extend our coverage on the south rift of a broad expanse of ponds that are up to 90 m deep, which we sampled in 2005 and 2013 and mapped with the AUV in 2011, and explore for the first time similar but even deeper ponds on the north rift. At other volcanoes, large-volume flows often coincide with caldera collapse events. Sediments dated so far show that one lava pond on the south rift of Axial formed about 1000 years ago—at roughly the same time as the deposition of the hydrothermal-rich deposits at the summit. This correlation is intriguing, and we hope that learning more about these ponded flows might help us understand when and how the summit caldera collapsed.

The third objective is to complete the AUV mapping (which has just been done off the R/V Rachel Carson) and observing and sampling with the ROV the flows erupted in 2011. A question remains about how the chemistry of the erupted lava changed as the fissure system extended down-rift. Another aspect of interest is the interaction of flowing lava with thick sediments. We saw during the 2013 expedition that pillows at the flow margins had exploded as water under them was heated to steam and that the sheet flows burrowed into or under the sediments. We will use push cores to sample steam-churned sediment where sheet flows burrowed under to see if sediment-lava fragmentation (peperite) occurred when the sediment was disrupted.

November 20, 2015
The cruise is rapidly coming to a close as we steam back to Moss Landing after completing all of our planned ROV dives. I have been doing field work on the Gorda and Juan de Fuca Ridges for many years and I think this is the first cruise when we were able to complete all our planned work without losses due mainly to bad weather. A nice change, to be sure!

November 20, 2015
The ROV was on deck by 5:00 p.m. local time yesterday and the ship immediately turned and headed south for home. We worked up the dive samples after dinner and enjoyed the evening, knowing that we had plenty of time to pack up and clean the labs during the three-day transit.

November 20, 2015
Today was our last dive of the expedition. This dive sampled another series of large collapsed lava flows, just southwest of yesterday's dive and also at about 2,200 meters deep on the south rift of Axial Seamount, approximately 25 kilometers south of the summit.

November 20, 2015
We started off today in what we thought would be a drained lava lake similar to those we had come across previously. At least this is how we read our bathymetric map that shows the topography of the seafloor in great detail (these maps show objects as small as one meter in size!).

November 20, 2015
Today we were lucky to have two dives on Axial Seamount. The first dive on the western flank of Axial’s caldera focused on a peculiarly flat area cut up by faults imaged by recent AUV mapping. We suspected that the terrain was comprised of very old and very thick sediment, which filled and covered all of the underlying lava topography and subsequently faulted.

November 20, 2015
The dive today was on the west flank of Axial Seamount, starting on the rim of the caldera above the ASHES hydrothermal vent field on the caldera floor. The sediments here are up to 1.5 meters deep and should record the explosive history of the volcano back before the caldera formed.

November 20, 2015
The day was mostly cloudy with light winds and some rain showers. Velella velella, commonly called "by-the-wind-sailor" are siphonophores related to Portugese man o' war. They have been silently drifting past the ship by the millions. They have a small "sail" that is oriented at an angle to their float, which helps propel them much like a sail on a sailboat.

November 20, 2015
Axial Seamount has a summit caldera and two rift zones that extend for approximately 50 kilometers (~30 miles) to the north and south. Magma accumulates and is stored in a reservoir under the caldera, and periodically it either erupts at the summit or is intruded down one of the rift zones where it may erupt there. Today's dive was conducted deep on Axial's North Rift Zone, where our maps of the seafloor show that there is a series of very large lava flows that had been erupted sometime in the past.

November 20, 2015
We arrived at Axial Seamount at about 1:15 p.m. local time after our transit from Newport, Oregon. The sun was shining brightly early in the day, but clear skies up here means it can be really windy, so it was a good thing that it became partly cloudy by the time we got to our destination.

November 20, 2015
We left the pier in Yaquina Bay, Newport at 7:00 A.M sharp. It was sunny in the bay but as soon as we left the harbor channel we hit a soupy wall of fog, which we were in for much of the day as we steamed west.