The dive today was on the west flank of Axial Seamount, starting on the rim of the caldera above the ASHES hydrothermal vent field on the caldera floor. The sediments here are up to 1.5 meters deep and should record the explosive history of the volcano back before the caldera formed. There are some flows that originate from fissures on the rim, but most of the lavas that have erupted recently from the fissure system are trapped in the caldera or flowing south. We have been trying to sample the full sediment section now for the better part of a decade with limited success. In 2005 we tried using the ROV vibracorer, which works splendidly in Monterey Canyon sediments, but the volcanic glass fragments just shook out here. In 2011 we hopped up to the rim here at the end of a dive that had been focused on the microbiology of the ASHES vent field. We had long push cores with us but hadn’t yet developed the piston cores or learned that if you pause to re-position the manipulator arm mid-stroke as the core is being inserted into the sediment, these glassy sediments seize in the core barrel and no additional sediment enters the core tube. Today was only a little better with the piston corer. The core barrels inserted much farther than the lengths of the cores recovered. However, these still were the longest cores collected here yet: up to 45 centimeters of black volcanic glass sand. 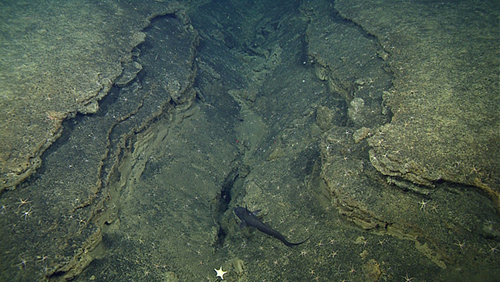 Looking along a fracture about a meter deep. Alternating layers of volcanic glass sand and hydrothermal clays are exposed, which record the explosive eruptive history of Axial Seamount and possibly caldera collapse events. Short cores into each exposed layer have recovered most of the section, but not all one core. A rattail fish (Macrouridae), sea star, and many brittle stars are also in view.

When lava erupts in water, the surface cools quickly and solidifies into hard rock that is usually glassy and brittle. However, lava in the core of the flow cools much more slowly because it is better shielded from the cold seawater. These different rates of cooling between the internal “core” and outer “crust” of lava flows explain many of the lava drainage features of underwater volcanoes, including hollow pillow tubes and collapses that are common at Axial Seamount. Elongated pillow tubes, like the one below that we sampled on today’s dive, commonly form as lava flows downhill. Here, the solid outer crust of the pillow tube fractured, and a small portion of the molten core drained away before it solidified. These partially hollow tubes have thin crust that is ideal for sampling with the ROV’s manipulator arms. 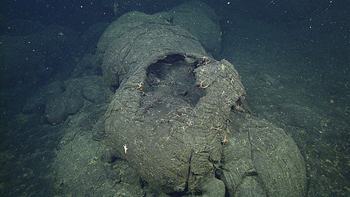 A pillow lava tube has cracked open and drained, leaving a thin outer crust that is easier to sample than solid pillows.

A related seafloor feature occurs on a larger scale. Lava mounds or ponds may form when flowing lava slows down (due to cooling or barriers to flow) and piles up on itself. The outer crust in contact with seawater cools and solidifies. If the still-molten lava in the interior of the mound or pond drains away before it cools, then a partially hollow crust remains. This crust is usually unstable and the roof caves in to form a skylight. These skylights are often large enough to explore with ROVs, as we did during today’s dive. We found abundant evidence of ponded lava that drained away, such as these bathtub rings that record the level of receding lava (below, see more images of lava drainage in a previous post). Drainages occur as fluid molten lava encounters or creates conduits where flow is less impeded.  Therefore, studying the shape and texture of lavas gives us insight not only to how lava flows but also to the structure of crust that lava flows on and through. 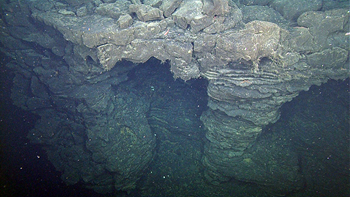 Lava pillars support the thick roof remaining of a flow that ponded and then drained. 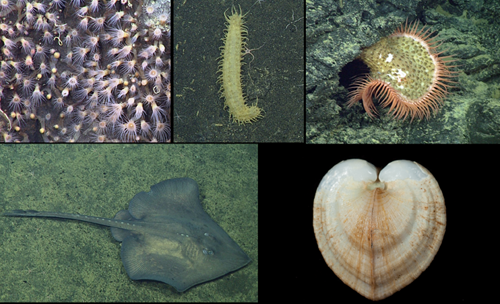 Upper row (left to right): Small Zoanthid anemones cover the surface of lava rock. This sea cucumber has an amazing ability to ingest sediment and sharp glass shards, extracting nutrients and leaving behind what is not digested. A large anemone, of the family Hormathiidae, clings to lava and settles into a “fly trap” posture.
Bottom row (left to right): A graceful deep-sea skate (Bathyraja abyssicola) slowly swims by and checks out what we are up to. This heart-shaped clam has a very thick shell, but it may not be enough of a defense against the skates that roam the area. The skates have large, bony plates in their mouths which allow them to crush even the toughest of shells. 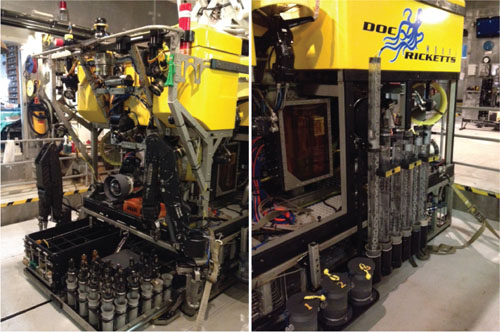 The ROV Doc Ricketts is equipped with many samplers for our dives. (left) View of the front of the vehicle. The hydraulic sample drawer slides open when we are ready to collect a sample. In the left half there is a partitioned box to stow our rocks with four scoop bags tied on, and in the right half are three sets of eight short (30 centimeters long) push cores in gray quivers and a gray-lidded biobox behind for recovering large biological samples. Manipulator arms are mounted at either side of the drawer and the HD camera is at the center. (right) View of port on left side of vehicle. Six cores are mounted on a swing arm: one piston core that is 1.5 meters long , and three piston cores and two push cores that are 1 meter long. Three lidded biojars are just to the left of the cores on the swing arm. The suction sampler is mounted is in the interior of the vehicle out of view.