Uncovering the past at Axial Seamount

Axial Seamount has a summit caldera and two rift zones that extend for approximately 50 kilometers (~30 miles) to the north and south. Magma accumulates and is stored in a reservoir under the caldera, and periodically it either erupts at the summit or is intruded down one of the rift zones where it may erupt there. Today’s dive was conducted deep on Axial’s north rift zone, where our maps of the seafloor show that there is a series of very large lava flows that had been erupted sometime in the past. The goal was to traverse across these flows and sample them to determine their lava chemistry, and to collect the sediment that overlies them to constrain the ages of the lava flows. We are beginning to suspect that very large lava flows deep on the rift zones may be associated with past collapse events of the summit caldera. This is because they represent a large volume of magma that must have been removed rapidly from the storage reservoir beneath the caldera. When that magma was removed, it could have taken away support from the seafloor above the reservoir, leading to collapse. In addition, we wanted to compare these large lava flows on the north rift zone to similar ones on the south rift zone that we will be visiting later on this expedition. Overall, we’re trying to uncover the history of caldera collapse events in Axial’s recent past.

Today’s dive started on the west side of the north rift zone at a depth of 2,100 meters and we traversed to the east while rising up a series of these large lava flows. We call these types of flows “lava ponds”, because they were apparently very fluid when they erupted and consequently their upper surface is relatively flat, although there are often collapse pits in their interior. The dive was a little like going up a staircase because each individual lava flow is relatively flat and separated by step-like steep slopes at their edges. We collected a sequence of lavas and sediment push-cores. These samples will be analyzed in detail back in the lab before we know the results.

Amoung notable denizens of the deep, we saw several tiny octopuses along our transect.  At the edges of most of the collapse pits in the large lava ponds, which have near-vertical or overhanging walls, we found dense colonies of corals taking advantage of the setting for filter-feeding in the prevailing bottom currents. We also collected several specimens of a relatively rare animal called an Enteropneust. Jessie and Linda will tell us more about these another day. 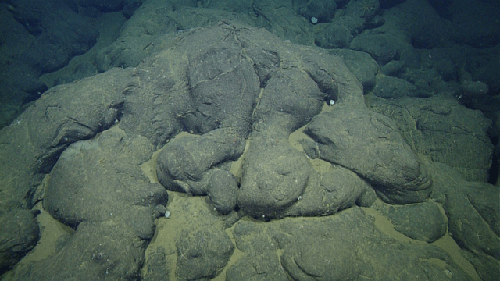 Elongate lavas like these cascaded down the steep outer walls and built a levee around each lava pond when it had been full to overflowing with molten lava. Our dive climbed three such outer walls, traversed along the levees, and descended into the drained and collapsed pits inside. 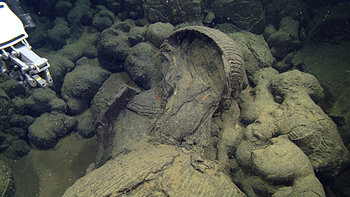 Drained lava pillow. The thin rind of this lava pillow chilled when it first contacted the cold seawater, but the pillow still had molten lava inside, which cracked open the rind and continued flowing downhill. The manipulator arm (left) is preparing to collect a sample of the rind, which is easier to break than the intact pillow surfaces. 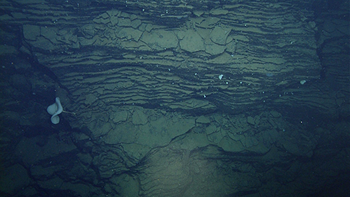 Thin horizontal striping on the inner wall of one of the lava ponds is due to the slow draining of molten lava from the interior. As the surface dropped, lava chilled to the wall. Here the thin rind broke off numerous times, elsewhere we have seen veneers of lava left on the wall. These drainback features are a clear indication that the pits had once been full of lava, and its drainage had left the roof and upper walls unsupported and prone to collapse. 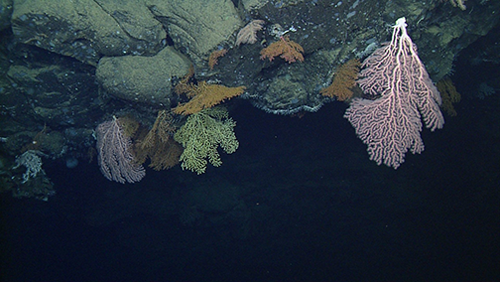 Looking down on the edge of the overhanging inner rim of a large collapsed lava pond, about 130 meters deep (almost a 400 feet drop). Water currents along the rim bring food for filter-feeding animals like these corals (Acanthogoriga, Paragorgia, and Swiftia). 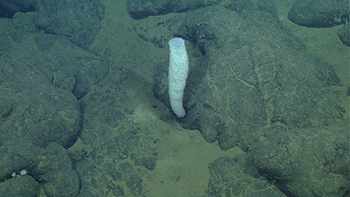 Venus Flower Basket. This sponge is made of small glass “rods”, or spicules, that form an intricately arranged matrix that tissue grows around. They feed by filtering small bits of food from the water.