An intern’s eye view of science at sea

After flying between “Marker 1” and “Marker 2” over the past couple dives, today the Peter Brewer team marked new territory as a research site. “Marker 3” signifies the location of a five-meter hunk of hydrate. The team determined this undercut mound of hydrate worthy of data collection on today’s dive and possibly on future expeditions.

A close-up of part of the hydrate mound that was the focal point of much of today’s research. The white color was deceiving and analysis during the dive showed evidence of traces of petroleum hydrocarbons.

Each marker—a black number on a white hexagon, attached to a metal weight by a curling, yellow cord—floats upright on the seafloor. Clearly man-made, the markers stand out from the deep-sea environment without disturbing the ecosystem around them. In one case, a snail has laid eggs on a old marker. 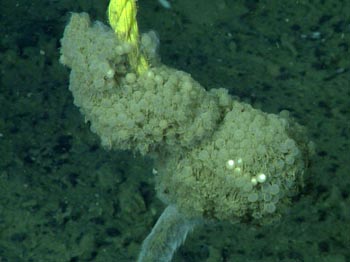 In the year since this polypropylene rope and marker were placed on the seafloor, a snail laid a large deposit of eggs.

Even observing the pilots and scientists collaborate to bring Marker 3 from the tray to the desired location—a relatively simple endeavor—showcased their experience with the technology and one another.

Knute Brekke, piloting the ROV, flew the Doc Ricketts a couple of meters forward, within range of the desired site and opened the tray. The tray, a rack below the ROV, stores the push cores, the biology box, and many of the instruments used throughout the dives. Mark Talkovic deftly moved the manipulator to pick up Marker 3. The scientists identified the ideal deposit site (not near the sides of the hydrate—those might erode!) and adjusted the iris of the Doc Ricketts main camera for better visibility. All of this from more than 1,800 meters above. Appreciating the sophistication of the MBARI staff’s skill and technology inspired awe and gratefulness to witness science advance. 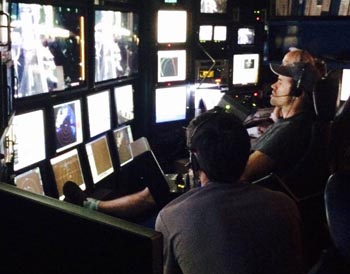 Pilots Bryan Schaefer, in the foreground, and Mark Talkovic work together to maneuver the ROV Doc Ricketts and its robotic arms.

The ROV returned to Marker 3 later in the dive. As in yesterday’s dive, the team scraped hydrate, like shaved ice, from the five-meter mound, with some difficulty, into a collection funnel. Hydrate forms when deep-seafloor hydrocarbon gases solidify under the enormous pressure of 1,800 meters of seawater and the near-freezing temperatures that shape these deep-sea environments.

Trapping the buoyant fragments in the gas funnel, the team melted the hydrate by activating an electric heating rod in the instrument. Once in its gaseous state, the hydrate no longer risked freezing up the tubing as it was pulled into an evacuated stainless steel cylinder for further analysis after the dive. 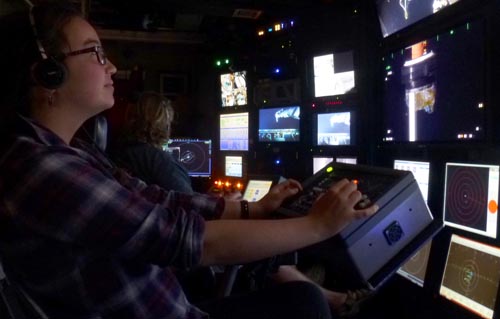