Bringing a heater to the deep

We have seen how chemists use a probe to learn about gases in the water within the seafloor sediments, and how they bring oil samples close to the surface to test the gases that were dissolved in the oil. Today the Brewer team used another tool in its arsenal—the heated gas funnel.

Hydrocarbon gases that emanate from the seafloor often become solid ice-like hydrates under the high pressure and low temperatures of the deep sea (at today’s working depth of 1,800 meters, the water was about two degrees Celsius, which translates to about 35 degrees Fahrenheit). The hydrates clog up tubes or gas cylinders, so the researchers needed a way to melt the hydrate and turn it back into a gaseous state. The heat probe in the middle of the funnel addresses that need. The team has used a heated funnel many times before, frequently refining it to assure more reliable results. 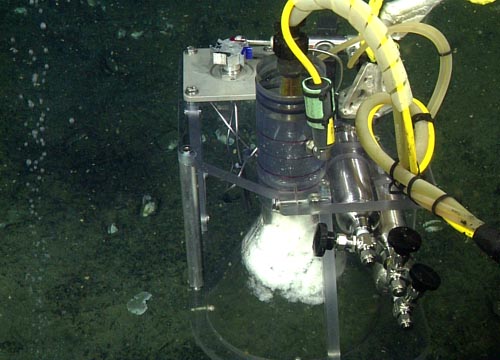 At left is a steady stream of gas bubbles rising from the seafloor. The funnel pictured here had been held over the bubbles for a few minutes, resulting in the accumulation of a mass of white hydrate “ice” that is a water “cage” with the gas as a guest in the middle. The heating probe inside the funnel was then turned on just long enough to melt the solid hydrate and turn it back into a gas. The probe brought the temperature in the funnel up to about 25 degrees Celsius, or about 77 degrees Fahrenheit. The gas sample was then siphoned into a small stainless steel cylinder attached to the apparatus. With three such cylinders (seen on the right) mounted on the funnel, the team could collect three samples from different sources during the day’s dive. 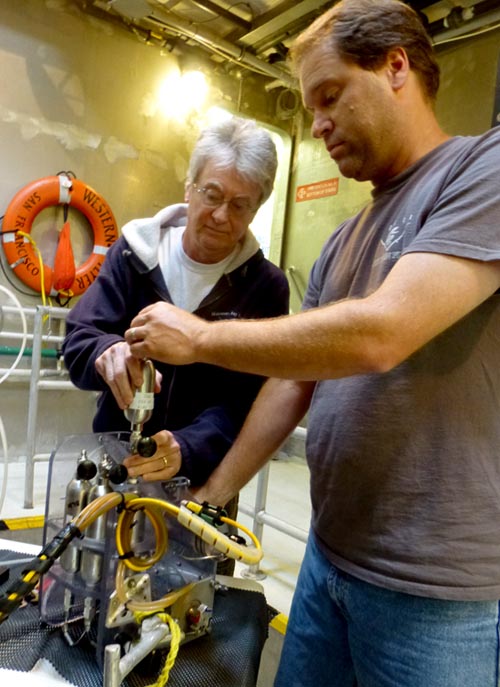 Once the funnel apparatus was back on board the ship, Research Specialist Ed Peltzer, left, and Senior Research Technician Peter Walz carefully separated out and stored the samples so the composition of the gases could be analyzed back in the laboratory on shore.

The science group extends a special thank you to Captain Andrew McKee and the ship’s crew, and Chief ROV Pilot Knute Brekke and his pilots for their skill and hard work allowing a long dive today despite rough seas. 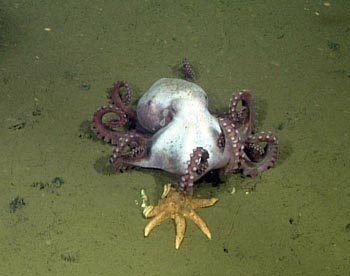 Here is a picture we are including especially for Mrs. Bowers’ fifth grade class at Roselawn Elementary School in Chetek, Wisconsin, who have been diligently following our daily logs. We are so glad you are all interested in learning about the chemistry of the deep sea. But we thought you might also like to see a few animals we saw today when the ROV was moving from one stream of gas bubbles to the next. One of the scientists found the perfect music to accompany the sight—The Beatles’ Octopus’s Garden.