One goal of this expedition is to repeat an experiment first performed last year to determine what gases are dissolved in oil that emanates from the deep seafloor. By repeating experiments, scientists further validate their results, add more data points, and refine the methods used to perform the experiments. By any measure, today’s oil and gas experiment was a successful repeat.

Scientist Peter Brewer’s team and the ROV pilots first had to find the oil escaping from a known petroleum reserve beneath the sediments. Although last year they found steady streams of oil droplets venting from several locations, this year the oil was less forthcoming. They only found a slow release of about one droplet every 10 or 12 seconds. It took about an hour to collect enough oil in a tube to begin the experiment. 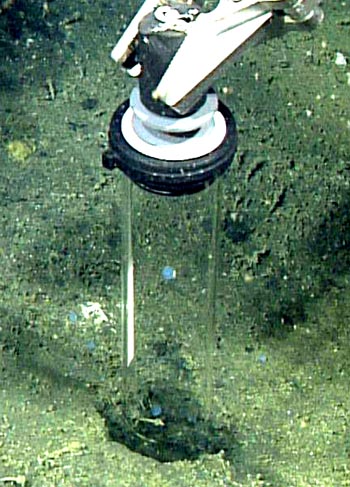 A tedious job for the ROV pilots: collecting a quantity of one oil droplet at a time. 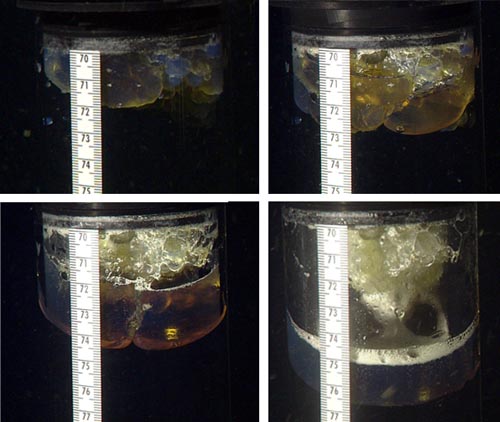 The oil sample collected in the top of a glass tube at a depth of 1,800 meters. Top left, the individual droplets first coalesced into larger blobs. Top right and bottom left, as the tube was brought up from the deep sea, the change in pressure and temperature caused the gases dissolved within the oil to first expand, then separate out. Bottom right, by 300 meters from the surface, the gases were at the top of the tube, the oil was all liquefied, and a white solid “ice” of methane hydrate had formed. 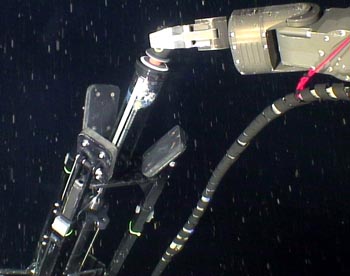 The scientists asked the pilots to do something new in hopes of getting the most reliable reading of the gases in the core tube. Instead of pointing a laser at the tube thus getting a signal that included the sea water, they asked to invert the probe that is usually used in the seafloor. Pilot Randy Prickett did a test run on how to hold the fragile glass core in one robotic arm and the bulky, complex probe apparatus in the other, then position them just so to allow the probe to be extended up into the glass tube, through the oil layer, with the tip ending up in the gas layer. It worked like a charm.

The probe is part of the laser Raman spectrometer system, which can determine the composition of some substances by shining a laser on them and interpreting the light signal that bounces back. Today, the system detected a high methane signal in the gases that had been trapped in the oil until brought up from the deep sea. Many other gases were also present, but methane showed the strongest signal.

These experiments are unique in that they allow testing the behavior of oil and gases in a natural environment. As the ocean warms, more gases could be released from the deep sea. The lessons learned could also be useful when addressing the issues created by human-caused oil spills, such as the 2010 Gulf of Mexico spill since the experiment described here sheds new light on how oil transports gases from depth to the surface ocean.