Revisiting a field of bubbles

The initial dive of this expedition gave Chief Scientist Peter Brewer and his team a chance to get reacquainted with the dive sites they first visited a year ago, scoping out locations to continue their studies of deep-sea chemistry processes. It took 30 hours to sail to the waters off the northernmost part of the state, where many natural gas and oil venting sites have been found on the seafloor. The long trip meant a shorter than usual remotely operated vehicle (ROV) dive.

As the ROV neared the seafloor at a depth of 1,800 meters, no less than seven plumes of rising bubbles were visible on the vehicle’s sonar. The dive was then spent visiting several of these bubbling sites to assess the best areas for more in-depth study. This group will use several tools over the next few days to add to a base of knowledge on how oil and methane gas behave in seafloor sediments and—once released from the sediments—as they rise up toward the surface of the ocean.

A fairly typical seafloor scene during a Brewer team dive. At right, one of the ROV’s robotic arms holds a poker used as a “dipstick” to see if the sediments are soft enough for the insertion of the valuable laser Raman spectrometer probe (contained within the black apparatus in the middle of the picture). The seafloor is often covered with clams and bacteria that thrive in these areas of methane-rich areas, and pieces of solid methane hydrate “ice” poke out from under the mud. Today, a finescale mora (Antimora microlepis) visited the research site, too. 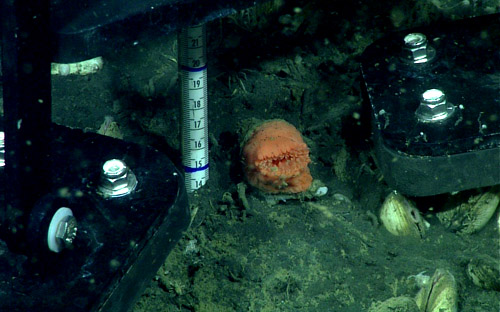 The laser Raman spectrometer pore-water probe (marked with a ruler) is inserted into the seafloor. The instrument measures gases in the water within the sediment on the seafloor. A small anemone was found living among a field of clams. 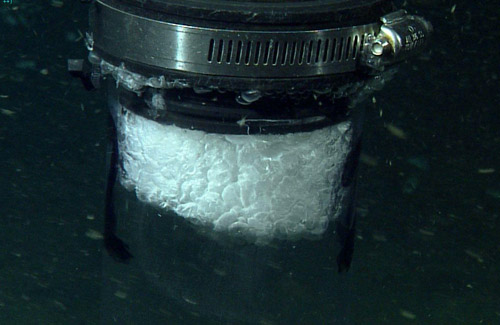 As a quick test of the composition of some of the bubbles emanating from the seafloor, the ROV pilot held a tube above the bubble stream. The solid white substance that formed in the top of the tube indicated the bubbles were mostly made up of methane gas. The fact that this white substance stuck a bit to the tube when they tried to empty it hinted that a bit of oil was also mixed in. Some sediment samples that were brought to the surface today also smelled strongly of sulfide.