Today we worked at a site we called the North Plume. Five bubble plumes could be seen on the sonar over 400 meters above the seafloor at this site. Sonar sends pulses of sound and listens for echoes. The sonar can easily detect hard targets like rocks, but can also detect gas (including animals with gas bladders). This is how the plumes at Eel Canyon were first discovered. A group of persistent water column acoustic anomalies here were discovered during NOAA Ocean Exploration mapping cruises (Gardner et al., 2009). Other mapping cruises since then have confirmed the plumes. The gas venting from the seafloor at this site is methane. 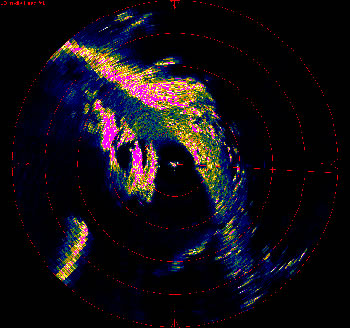 This screen shot from the ROV’s sonar was captured over 400 meters above the seafloor. The colors indicate the bubble plumes rising in the water.

The Paull lab is interested in understanding the processes associated with seafloor gas venting and its impact on seafloor structure. By sampling in and around the vents, the team can understand the gradient of gas around the vent. We took push-core samples well outside the venting area and then close to it and within it. By measuring the methane present in the pore water, researchers can see if the gas is present in a large area or very localized around the vent.

At the vent site, gas hydrate had formed. Gas hydrate, or clathrate hydrates, form when a gas binds with water to form a crystalline structure. The hydrates form only in the deep ocean, because they need low temperature and high pressure. 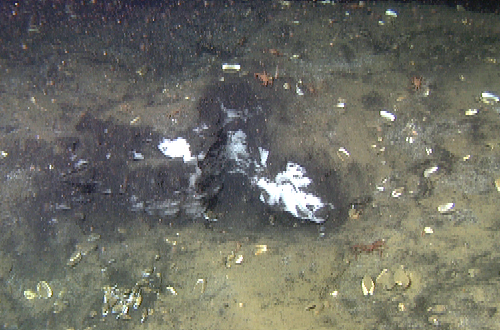 Although hard to see in this image, gas bubbles are continuously escaping from the vent. The white is the hydrate surrounding the gas vent. 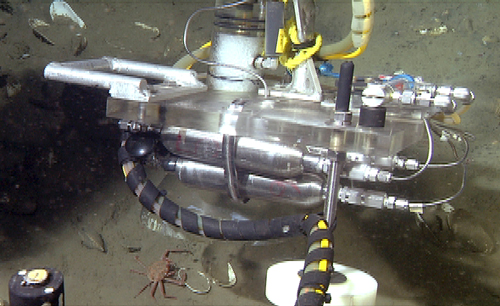 We used this gas sampler to collect bubbles into the funnel. You can see the gas hydrate that formed in the cylinder on top. The hydrate is then heated to return it to its gaseous state and released to a gas cylinder to be analyzed in the lab.