For most of this morning, we were still transiting north to Noyo Canyon. We arrived at the dive site and were ready to launch the remotely operated vehicle (ROV) by the time lunch was over. Noyo Canyon is offshore of Fort Bragg, California. This canyon is interesting because the San Andreas fault transects the head of the canyon. In the 1906 earthquake, the fault slipped about nine meters at the head of Noyo Canyon. In 2011, the Paull lab sampled sediment at the head of the canyon, so this time, we sampled further down the canyon at 800 meters.

The ROV started a transect from one side of the canyon, to the thalweg, or lowest point of this section of the canyon, collecting vibracores and push cores along the way. A ledge in the thalweg proved to be made of very stiff sediment, but we were able to extract one push core from it. The stiff sediment indicates that it was deposited there a very long time ago. There doesn’t seem to be evidence of recent sediment transport down canyon, unlike Monterey Canyon, which is actively bringing sediment down canyon at least yearly. Charlie Paull indicated that these observations are consistent with there having been a major event (probably the 1906 earthquake) and there has been very little sedimentation since then. Once the cores are analyzed for DDT, grain size, and carbon-14, among other analyses, these theories may be confirmed. 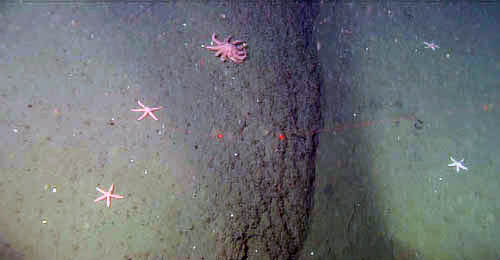 This small ledge ran down the axis of the canyon.

When the ROV is recovered, the moon pool and wet lab become busy with activity. Each push core is processed differently, depending on where it was taken and what analyses will be done. Some cores are sectioned every one centimeter, some every two centimeters, and some are simply extruded and split down the middle to be photographed. 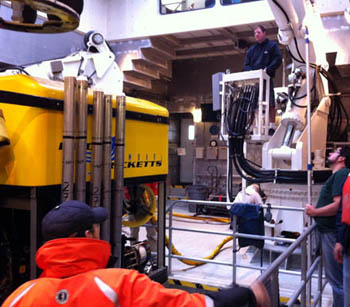 First Mate Erik Larson (top right) pays out the line that lifts the ROV after the recovery as Eric Martin (far right) and Ben Erwin look on. 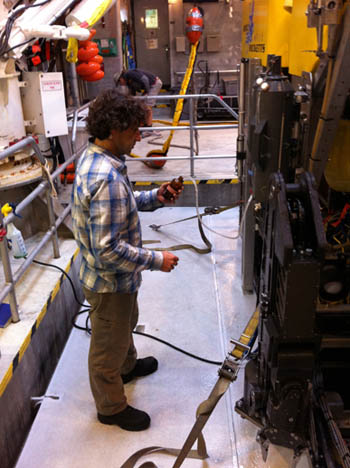 Roberto Gwiazda recovers water from one of the Niskin bottles. He will analyze the water for traces of methane. 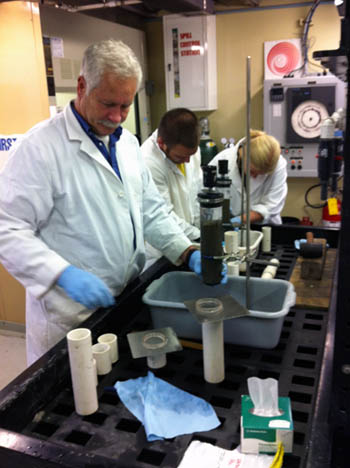 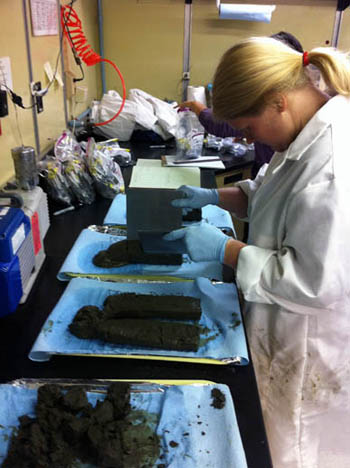 Esther splits one core down the middle.