Submarine canyons dominate the landscapes of continental margins, and Monterey Canyon is one of the largest on the Pacific Coast of North America. It is similar in size to the Grand Canyon. For many years, geologists have asked the question, “how are submarine canyons formed?” While it has been assumed for some time that canyons have been formed from processes running down their axes, most submarine canyons are not thought to be actively forming at the present time.

Charlie and his team have been studying canyon dynamics in Monterey Canyon for about 15 years, and they have discovered that Monterey Canyon continues to be an extremely active feature. Canyons are created when storms and mass wasting events from canyon walls cause surges of large volumes of material down their axes. The time and place of these events are difficult to predict and some areas can even act as reservoirs for sediment that may later be transported by a larger event. For more on the Paull lab’s previous research on canyon dynamics, read this chapter from the 2005 MBARI annual report. 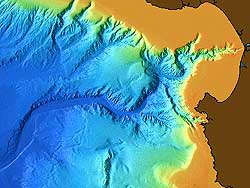 Sediment in Monterey Bay flows to depths more than 3,500 meters. The Monterey Fan is the deepest part of the canyon, to the far left of the image.

Collecting cores and analyzing the sediment for traces of DDT and carbon–14, for example, allows the team to determine the age of the layers within a core. Using this technique, and others, they have determined that the upper Monterey Canyon is very active, with major sediment flows occurring one or more times per year. The outer part of the canyon, in contrast, is less active. A former postdoc in the Paull lab determined that sediment is transported to an area at 3,500 meters depth in the canyon about every 230 years, the last event occurring between 60 and 150 years ago.

The remotely operated vehicle (ROV) pilots use the manipulator to insert push cores into the sediment and then return the cores to the quiver in the ROV drawer.

The area we worked in today was in the outer canyon at 2,900 meters. This area is the conduit for transport of these large sediment flows onto the abyssal plain off Monterey Canyon. Consequently, it is also the major mechanism for transport of the nutrients that eventually feed the deep-sea fauna in the Monterey Fan. This area has been mapped by MBARI’s mapping autonomous underwater vehicle (AUV). The high-resolution maps revealed bedding that is almost dune-like in formation. It is unclear whether these are deposits from down canyon transport, or if there are some erosive forces creating them. The vibracores and pushcores collected today will help the team understand how these features are formed and will give them more insight into Monterey Canyon’s ever-changing transport mechanisms. 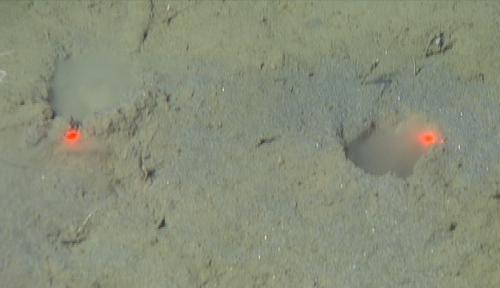 This is the hole that remained after a push core was removed. The darker sediment around the hole is a larger, grain-sized sand, buried many centimeters below the seafloor. The red dots are lasers on the camera housing set at 29 centimeters apart for scale. 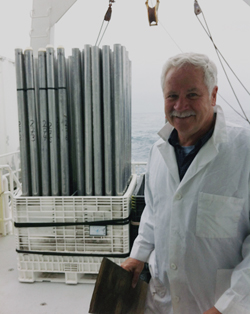 A happy Charlie Paull walks in from the back deck, ready to process push cores. You can see the many vibracore tubes in a container behind him. If all goes well, we’ll use all of them! 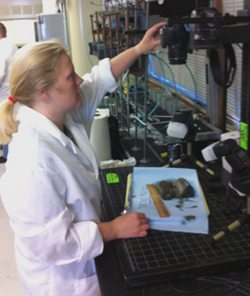 Esther Sumner takes a photo of an extruded core. They take a photo of every core for future reference. In these photos, you can clearly see the sand/finer grain sediment transition.

We are now headed north, with bumpy swell and some wind. We’re hoping that by the time we get to Noyo Canyon tomorrow, the weather will be good enough to dive the ROV. Noyo Canyon is a good halfway point to our ultimate place of interest, Eel Canyon. 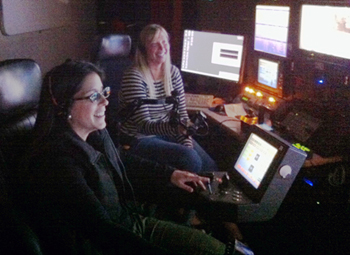 Krystle Anderson (in the foreground) and Susan von Thun take the ROV for a spin. (Note, getting the ROV from 2,900 meters to the sea surface takes a while, and sometimes the pilots let us stage images like this.)