Today we left the dock at 1:30 p.m., a little later than originally planned. On the last expedition, the Western Flyer didn’t use as much fuel as expected. Now we’re sailing with the fuel that was left over from the last cruise plus what was ordered for this one. Normally, the ship can safely navigate its slip and in and out of Moss Landing harbor with about a four meter draw, but with the extra fuel, it was about five meters, which meant that we had to wait for a little higher tide. 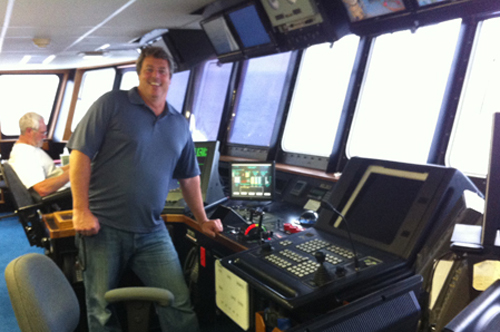 George Gunther is the relief captain for this leg of the expedition, while Andrew McKee takes this one off.

This is the first leg of an extended Western Flyer expedition to the Pacific Northwest. The researchers are studying Eel Canyon off the coast of northern California. Because weather forecasts up north don’t look very good, we’ll spend today and tomorrow in the Monterey Canyon. 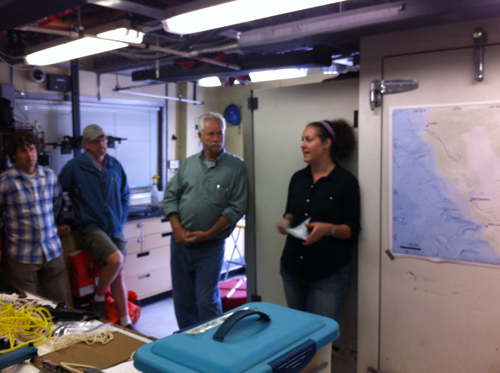 On our short transit to our dive site today, we had a fire and boat drill. On each cruise, the science team is briefed by the second mate, Miriam Anthony (right), on ship-board safety procedures. Chief Scientist Charlie Paull stands beside her. 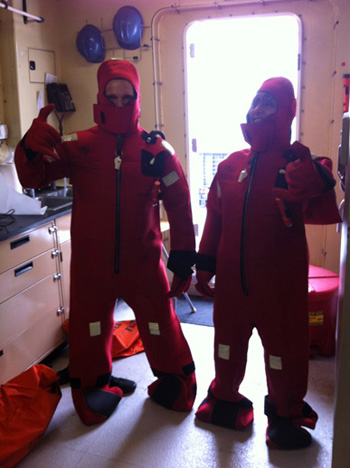 In the event of an emergency that requires we abandon ship, everyone on board will don a survival suit. These suits are not only buoyant, but they will keep a person warm in very cold water (which is what we’ve got here). Glenn Sherman and Lisa Margonelli practiced this drill by donning the suits, which are not as easy to get into as you might think.

Since today was a short day, it gave us just enough time to deploy the remotely operated vehicle (ROV) Doc Ricketts in about 300 meters of water near the head of Monterey Canyon to test the new vibracore system. Vibracoring is a common technique used to obtain samples from water-saturated sediment. These corers work by attaching a motor that induces high frequency vibrations in the core liner that in turn liquefies the sediment directly around the core cutter, enabling it to pass through the sediment with little resistance. The Paull lab has been using a vibracore system on ROVs for quite a few years, but this expedition involves using a new and improved vibracorer. The cores are a little over two meters tall and around seven and a half centimeters wide. This new vibracorer has two vibrating motors instead of one and is taller to allow the clamp to hold the core higher up. Both of these improvements will make it possible to penetrate the core deeper into sediment. 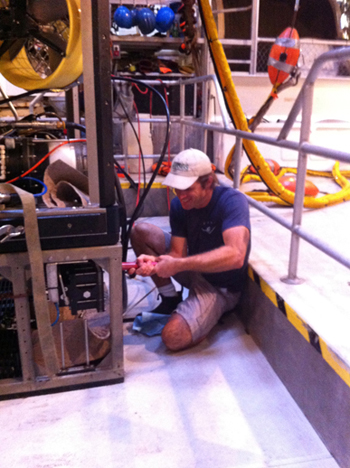 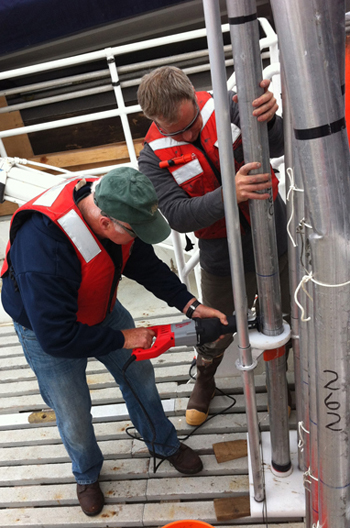 Brian Edwards and Peter Dartnell cut the excess tube from one of the cores. These cores are then capped on each end and stored in the cold room for later analysis at the U.S. Geological Survey. 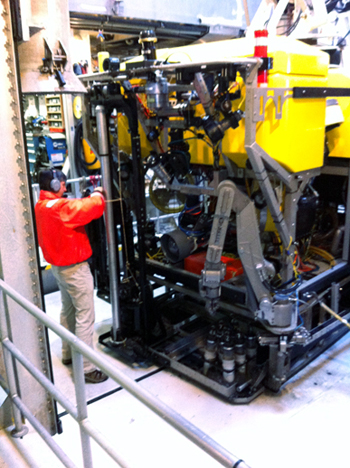 Bryan Schaefer secures the vibracore tube after the ROV was recovered.

By looking at layers of sediment in a core, Paull and his collaborators can glean information about mechanisms for sediment transport in a place like Monterey Canyon, where geological events can transport sediment rapidly down canyon. Paull has used this technique to collect cores in many places.