The Deep-Sea Chemistry Group’s two-part mission for the last leg of the Northern Expedition is to investigate the chemistry of the pore water—water that occupies the space between seafloor sediment particles—in sediments that surrounds a site of active natural seepage of oil and gas from the seafloor near the Eel River Canyon Slump. The team also will investigate the composition of the gas and oil as it seeps from the seafloor and how it changes as it rises through seawater toward the surface of the ocean.

Peter Brewer’s group will also investigate the composition and chemical structure of any gas hydrate deposits that they might find exposed in the areas surrounding the gas vents and oil seeps.

These gas and oil vents were first discovered by University of New Hampshire and National Oceanographic and Atmospheric Administration (NOAA) scientists in May and June of 2009 during cruises onboard the NOAA research vessel Okeanos Explorer (Gardner, Malik, and Walker, 2009. Plume 1, 400 meters high discovered at the seafloor off the Northern California margin. Eos Vol. 90, No. 32, p.275.). The natural seeps appeared as large plumes rising from the seafloor in their multibeam echo sounder display. In 2011, these sites were mapped in very high resolution by a team from MBARI lead by Dave Caress using the D. Allan B., a Dorado-class autonomous underwater vehicle (AUV) equipped for seafloor mapping. Later that same year, another team of MBARI scientists, led by Charlie Paull and aided by the high-resolution maps, explored the seafloor using the remotely operated vehicle (ROV) Doc Rickettsonboard the R/V Western Flyer to locate the source of these plumes, and discovered oil seeps in addition to the natural gas vents that were already expected.

The Deep-Sea Chemistry Group will use as their primary tool a laser Raman spectrometer, which can bounce a specially-tuned laser beam off many objects and substances, and receive back a signal that provides information about that object’s chemical composition and molecular structure. This tool will allow the team to get chemical data back from the seafloor in real time. They will use the high-resolution seafloor maps produced by MBARI’s mapping AUV to plan and conduct their dives around these natural vents and seeps. 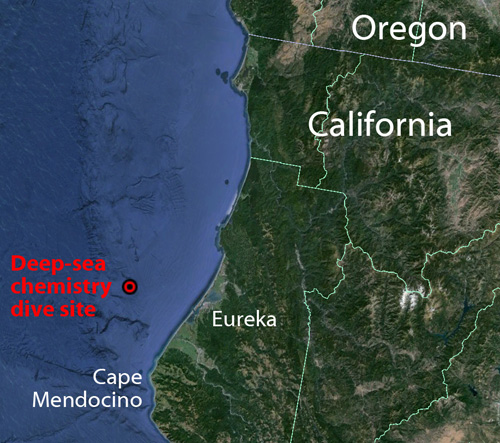 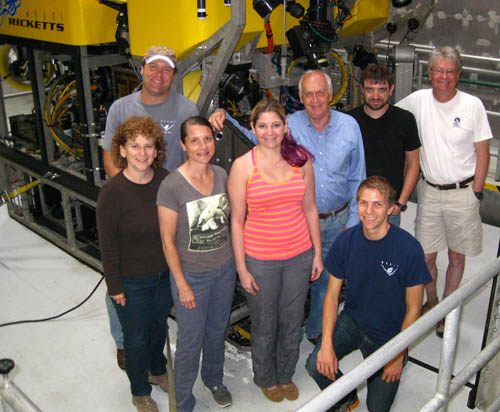 July 23, 2015
It’s a long trip from our research site offshore of Eureka, California, back to our home port of Moss Landing, California, but at least the swells and winds have subsided. The science team used the day to pack up their gear, clean the labs, and catch up on writing, reading, and editing projects. 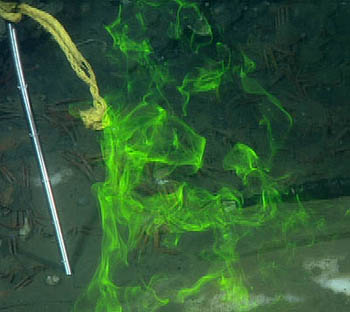 July 23, 2015
Just about every time ocean chemist Peter Brewer and his team go to sea, they put a new technique or tool to the test as they perform controlled experiments on the greenhouse gases of the deep sea. 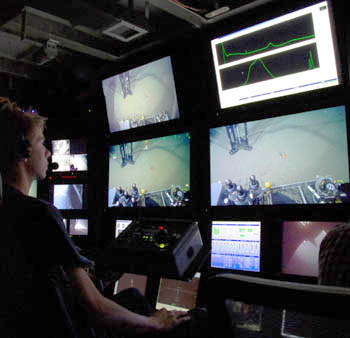 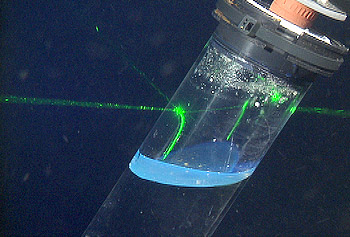 July 23, 2015
Today we used the laser Raman spectrometer to analyze gas being released from oil that we collected near the seafloor and then brought up toward the surface. 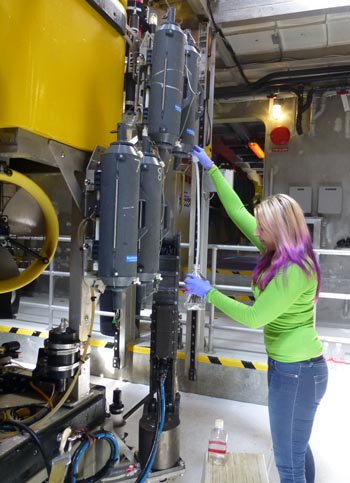 July 23, 2015
University of Georgia Postdoctoral Researcher Lindsey Fields takes water samples from Niskin bottles mounted on the side of the remotely operated vehicle. 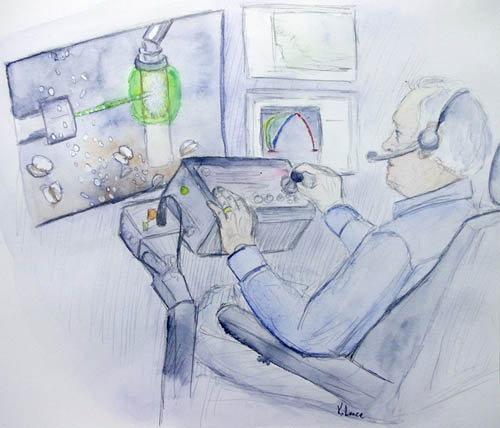 July 23, 2015
We are lucky to have science illustrator Kelly Lance with us on this expedition. Her sketches capture the team at work and her illustrations will help explain the science. Here, Kelly shows Peter Brewer in the chief scientist's chair...